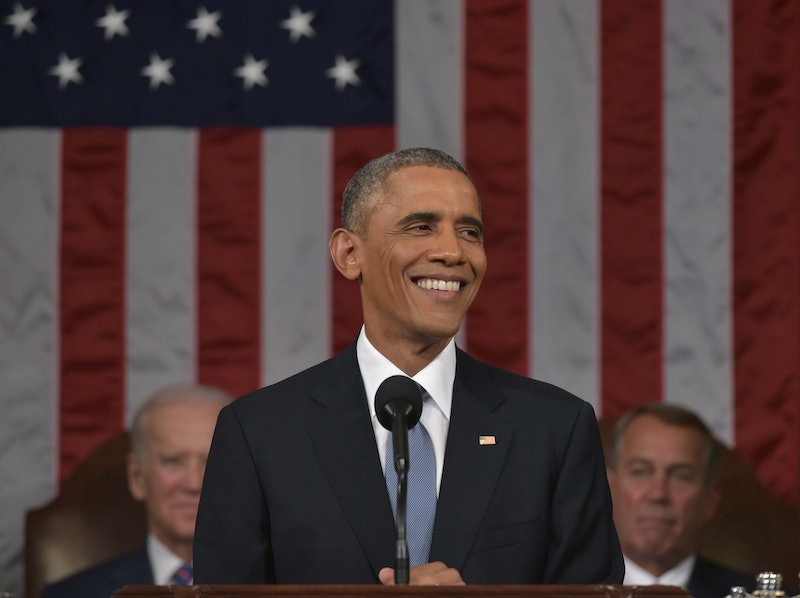 The State of the Union Address is one of the premiere events in Washington — sort of like the annual prom, except with way less dancing and a lot more clapping. And with it being President Obama's final year in office, Tuesday's address will pretty much be the president's senior prom. This makes the Jan. 12 address an absolute can't-miss event. So, on what channel will the State of the Union air?

Fortunately, there are multiple ways to watch, so you can do you while enjoying this year's SOTU. The address will air at 9 p.m. ET on all the major networks, so no matter which channel is your absolute favorite, you're pretty much covered. And Obama is doing everyone a solid by making the live address even more accessible. He said so during his nifty SOTU video preview.

My team is cooking up new ways you can watch, engage with the speech. And I hope you'll all tune in next Tuesday night, because this address will be for you.

Thanks, Obamz. While all these fancy new ways the president referred to may still be under wraps (could this SOTU be the first in 3D?), his White House team has already covered the basics. If you're like me, and rely on your laptop for all your show-watching, the address will be streamed live on whitehouse.gov/sotu.

But if you're like my parents, and plan to use a remote control to access the annual event, you may also opt for setting up a full itinerary complete with pre- and post-SOTU analysis. While most of the networks haven't provided line-ups just yet as to who will be the night's commentators, you'll likely see a number of the usual suspects. Nightly news anchor David Muir will probably the reporter of choice for ABC's coverage, along with Jonathan Karl and Martha Raddatz. The same could be said for the darling Scott Pelley on CBS. MSNBC gave you Krystal Ball, Dorian Warren, and Josh Barro for its special digital platform coverage of last year's SOTU, but that didn't mean losing out on Rachel Maddow and Chris Matthews. CNN's coverage of the address just wouldn't seem right without Wolf Blitzer or Anderson Cooper. And while NBC analysis might feel off since Brian Williams's departure as lead anchor, you've still got good ol' Chuck Todd to get you excited about Obama's vision for what's to come in Washington.

Of course, getting all the correspondents' final words on Obama's final speech before 9 p.m. is totally doable from a computer, too. Upon finding out the official day of this year's address, Maddow asked her viewers to join her and save the date by marking the event in their calendars, in pen.

Got it, Maddow. See you there!

More like this
How To Support Gun Control Reform Right Now
By Morgan Brinlee and Carolyn Steber
Kim Kardashian Remembers Her Last Words To Death Row Victim Brandon Bernard
By Jake Viswanath
What Is Barack Obama’s Net Worth? He Makes *Way* More Now As An Ex-President
By Hugh McIntyre
The Church Of Scotland Votes To Allow Same-Sex Marriages
By Sam Ramsden
Get Even More From Bustle — Sign Up For The Newsletter