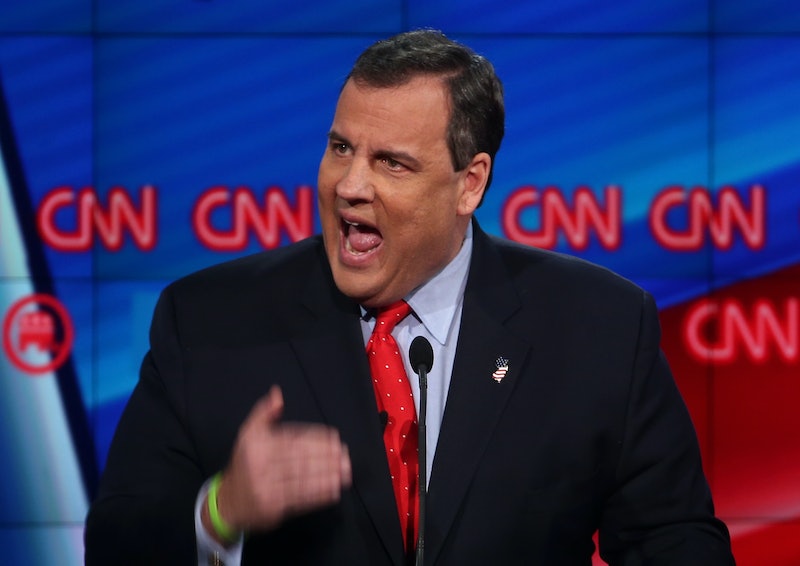 It's already proven to be a cultural phenomenon, with dozens of parodies and memes, and now a presidential candidate has jumped on the bandwagon. Chris Christie parodied Adele's "Hello" in an ad targeting fellow GOP candidate Marco Rubio. Besides the fact that he's extremely late to the party, Christie's invocation of Adele isn't exactly well-executed. In fact, it's kind of random and extremely awkward. Somewhere Adele is probably rolling her eyes and wondering why grown Republican men are shoddily appropriating her music to squabble with each other.

The ad, which Christie tweeted — twice — on Thursday, features a sepia-toned photograph with Christie and Rubio's faces spliced together. Christie is sporting his signature hearty smile while Rubio looks forlorn and tense. At the top it reads, "Hello Marco, it's me." At the bottom is a quote from Rubio: "Conservative leadership is hard to find these days, but the voters in New Jersey have seen it firsthand." Rubio delivered the glowing praise of New Jersey Governor Christie during a fundraising event in May 2013. In his second tweet, Christie's own caption reads, "The way things used to be... #tbt."

It's as if Christie's team, eager to try something new, scoured the Internet for something hip and culturally relevant to reference, perhaps to grab the attention of younger voters. What they failed to understand, however, is that viral phenomena have the shelf life of a month at most. Adele's video for "Hello" came out on Oct. 22, 2015 and reached its peak on Nov. 21, 2015 when Saturday Night Live spoofed it for a hilarious Thanksgiving-themed skit. Leading up to that parody, others had also taken a stab, from Ellen DeGeneres to Miss Piggy, but they were all well within the viral time frame.

After it surpasses its zenith, the viral video, picture, or meme gets stored away in the Internet's vast archives and is thereafter mentioned only when someone asks, "Remember when that happened?" Nobody would dare actively reference it again as if it were a fresh thought. But that's exactly what Christie did, sadly.

If the Republican candidate, who's trailing in fifth place in the polls with 4.7 percent, really wanted to get everyone's attention, he could have spoofed the Atlanta teacher who became a viral sensation when a video of him dancing with his students was released earlier this week. After all, Christie is excellent at dancing.

All in all, Christie's parody of "Hello" is just really uncomfortable for everyone involved, not least of all Adele. As a Brit, she can't vote in the 2016 election, but even if she could she probably wouldn't vote for Christie, especially not after the stunt he just pulled.