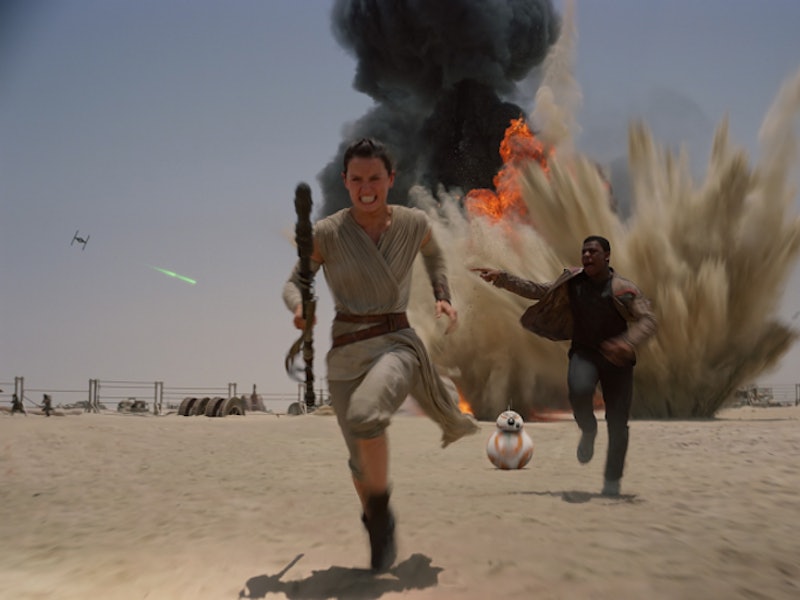 You didn't have to be in tune with the force to predict that the latest Star Wars installment was going to break a casual record or two. In fact, as early as the opening weekend, Star Wars: Episode VII — The Force Awakens was breaking box office records, bringing in $250 million in ticket sales at the time (which is, BTW, the highest sales number ever recorded). Well, hold onto your lightsabers, because the movie has done it again: The Force Awakens is now the number 11 top international box office movie of all time, soaring past the previous spot holder, Iron Man 3 — and it looks like it's going to crack into the top ten before the day is out. So how long would it be before it snags the number one spot... if it snags the number one spot?

Consider the following: The Force Awakens came out December 18, which is, to date, approximately 20 days ago. Since then, it's smashed records in every category. It recently became the highest grossing film in a domestic market (surpassing Avatar). It's number four film of all time in worldwide box office records, creeping up on Jurassic World. So, overall, not too shabby for the short amount of time it's been in theaters. Chances are the movie will stick around in theaters for at least another month before it needs to retire and make way for the DVD in the future — so what can we expect to happen during that time, based on the current rate of record-breaking The Force Awakens is doing?

Well, to expect that The Force Awakens will bring in viewers with the same... well, force, is a bit of an ambitious dream. Reasonably speaking, most people have seen the movie for the first time by now. I'm predicting that the only first-time witnessers at this point are late stragglers and very casual Star Wars non-fans. However, what The Force Awakens has that other movies don't is franchise fan power.

The way The Force Awakens will steadily bring in ticket sales is with repeat viewers and hardcore fanatics who want to experience the movie again. If you're a big Star Wars fan, have a day off and one casual non-fan friend who hasn't seen the movie, your knee-jerk reaction is "Oh, I'll go with you and see it again." Or if you saw the movie in standard format the first time but heard is was next level greatness in IMAX 3D, then yeah, you'll drive to another town with an IMAX screen and throw down more money to see it again. Eventually the desire to spend money on a film that'll be on Blu-Ray in three months will dwindle, but it'll keep the film breaking records throughout the remainder of the month.

So, my (not-so-expert) opinion? It is very plausible that if Star Wars continues to bring in recurring viewers, it could plausibly get the number one spot in international box office records by the end of the month. At the very least, it'll climb up a few more spots before it leaves theaters.

Overall, I think The Force Awakens is on the right track in terms of making film history. And even if it doesn't win the international box office crown, there's always plenty of DVD sales records to break.