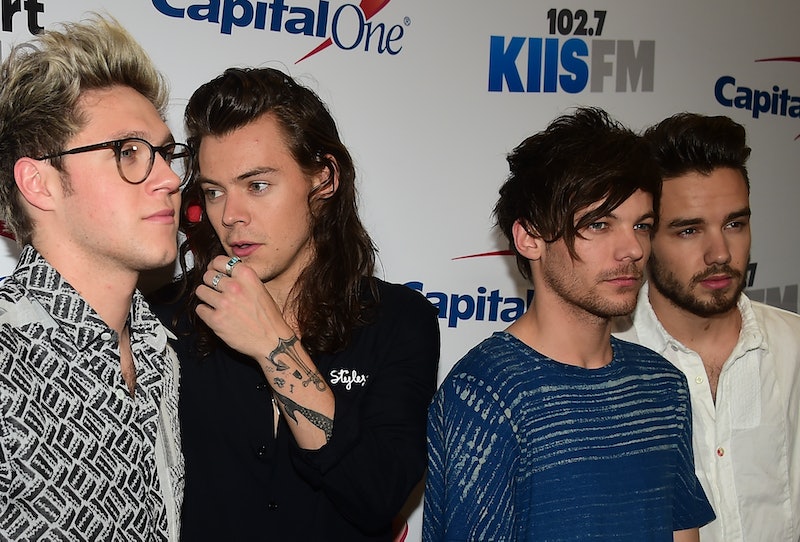 One Direction fans, rejoice! ...Maybe? Because, while the popular boy band did announce that they're taking 2016 off, they actually aren't going to completely disappear after all. However, what they are doing is returning in a way you probably never expected. They're heading onto our television screens in the form of cartoon characters. That's right... One Direction is guest starring on Family Guy. ...Yay?

Personally, I have no idea how I'm supposed to feel about this news. On the one hand, it is exciting to think that they've got at least one boy band endeavor together set up for the year. In doing so, my fears that the band was using a "break" as a way of splitting up have been hushed (That's what the Jonas Brothers did — just saying). But, on the other hand, this doesn't exactly strike me as exciting news. First, we don't actually get to see their beautiful faces. And, second, it just feels totally random.

However, since it is happening, what can we expect from the episode? According to Entertainment Weekly, the episode "centers on Chris running for homecoming king," and the band will be included, "in a campfire scene with Stewie, who tells them a scary story involving non-skinny jeans." OK, that's actually pretty funny! However, don't expect to hear the voices of all of the boys. As EW also confirmed that, "Payne and Tomlinson were the only two band members who recorded lines of dialogue for the episode." And we're just going to have to wait to find out more.

So, will this be the end or the just the beginning for the boys and their voiceover careers? You never know! Because, if they do split up, odds are at least one of them will make a break for an acting career. And, considering the current circumstances, Liam Payne and Louis Tomlinson... I've got my eyes on you.

Meanwhile, for now, there's nothing to be concerned about. So sit back, relax, and hear two of the members' voices in Family Guy's episode "Run, Chris, Run" coming this May.