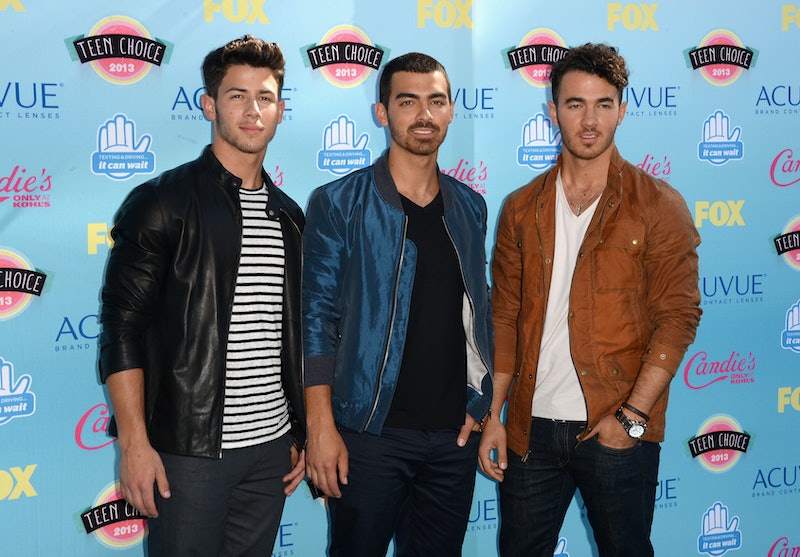 Oh, the Jonas Brothers. I constantly forget you are still a thing. Unacceptable on my behalf, given that I watched Married to Jonas. But those JoBros are burnin' up (YEAH, five points for a song reference!) in the news right now. The brother band canceled their upcoming comeback tour due to creative differences, but a source revealed that one of the "differences" is not actually related to the band's sound: allegedly, the middle Jonas has been battling drug addiction. Well, this got sad really fast. Reportedly, Joe Jonas's substance abuse problem has been going on for a while and brothers Kevin and Nick want to put his health before the band. What a smart, healthy, brotherly thing to do, Jonas One and Jonas Three.

Fueling this theory is the TMZ footage of Joe with addiction specialist Mike Bayer. Joe's rep has denied these claims, BUT if the story does hold water, it's wonderful that he's getting help.

Joe did eventually come forward... only to tell People Magazine, "I think acting would be fun." Okay. Follow your heart, I suppose. I liked Camp Rock. Maybe you were onto something there. When asked about all of the hullabaloo surrounding him and his brothers: "I'm not going to talk about that right now." That's your prerogative, Joe. I respect your privacy.

Another small, yet bizarre piece of the puzzle: the Jonas Brothers' Twitter account went AWOL yesterday. If 'N Sync suddenly created a Twitter account right before the VMAs/their speculated reunion performance, I think it's safe to assume the suddenly-defunct JoBros' Twitter account means the opposite for the band (translation: no reunion. The band is done). Always read into a sudden Twitter account creation/deletion. There's a lot to unpack there.

More like this
Britney Has Been Granted A Restraining Order Against Her Ex-Husband
By Bustle Staff
Who Is Betty Who Dating? The Australian Singer Is Married To Her Tour Photographer
By Radhika Menon
Olivia Rodrigo’s Song Dedication To 5 SCOTUS Justices Sent A Strong Message
By Grace Wehniainen
Everything To Know About J-Hope From BTS’ Solo Album ‘Jack In The Box’
By Stephanie Topacio Long
Get Even More From Bustle — Sign Up For The Newsletter