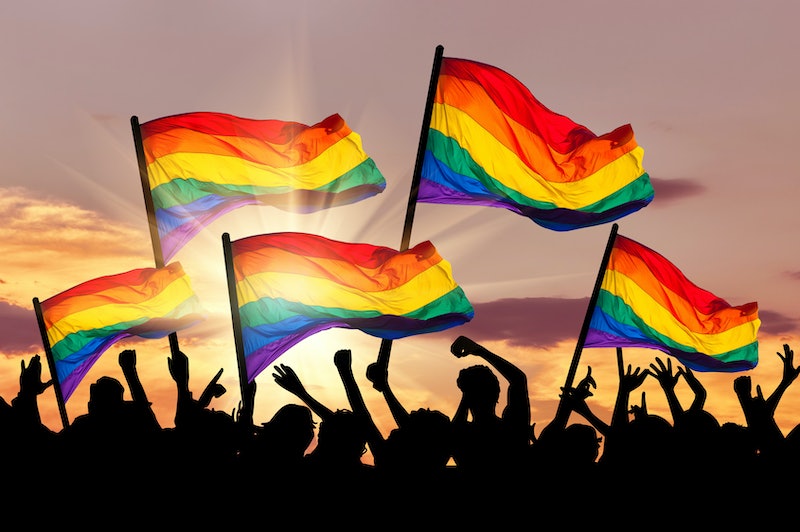 The Centers for Disease Control and Prevention just released its National Survey of Family Growth report for 2011-2013, which revealed that more people are identifying as bisexual than ever before. Of course, as with any large-scale survey estimating LGBTQ+ populations, getting people to self-report their sexuality accurately is notoriously difficult. So bear in mind the number typically skew lower than reality. However, the trends toward admitting fluid sexual orientation and behavior are encouraging, particularly as they begin to rise significantly in number.

The report, conducted between 2011 and 2013, surveyed 9,000 adults ages 18-44 and asked them about "the types of sexual experiences they have had, whether they are attracted to the same or opposite sex and whether they identify as being straight, gay/lesbian or bisexual."

Unsurprisingly, considering how sexually fluid we know millennials to be, fewer women are self-reporting as lesbians while more of them self-report as bisexual. Here are the results, by the numbers:

1.3 percent of women and 1.9 percent of men self-identified as gay, which is on par with other national reports and surveys.

In other words, for same-sex contact to "count" for men, it had to include a penis, whereas for women, the question of whether or not it "counted" was basically up to their own interpretation of the moment. Thinking about sex in this way is yet another example of how patriarchal definitions of sex simultaneously stigmatize and legitimize fluid male sexuality, while dismissing and erasing fluid female sexuality.

It's true that girl-on-girl action is not as stigmatized as guy-on-guy action, thereby allowing women to explore their sexuality more freely without fear of social backlash. But what good is that allowance when we also use it as an excuse to tell women their bisexual identity "isn't real" or is "just a phase" or a result of them "just being greedy"?

The other interesting finding of the survey revealed that significantly fewer Hispanic women reported engaging in same-sex contact: just 11.2 percent of them, when compared with 19.6 percent of white women and 19.4 percent of black women. So while we're (deservedly) celebrating increased visibility for white and black queer women who are marginalized at the intersection of race, womanhood, and sexuality, let's keep in mind that — due to the hard work of dismantling religious and cultural stigma — we're leaving Hispanic women behind in the push for mainstream acceptance.

While the methodology of the CDC's report isn't perfect, it is a useful tool for shining a light on the corners of intersectional feminism that we sometimes forget are still in the dark.

More like this
Are Gemini & Scorpio Compatible In A Relationship?
By Kristine Fellizar
How To Fight For Reproductive Rights, Based On How Much Time You Have
By Courtney Young
What Mercury Retrograde Spring 2022 Means For Your Sign's Sex Life
By Nina Kahn
Sandra Bullock, Girlboss Extraordinaire
By Matt Harkins & Viviana Olen
Get Even More From Bustle — Sign Up For The Newsletter