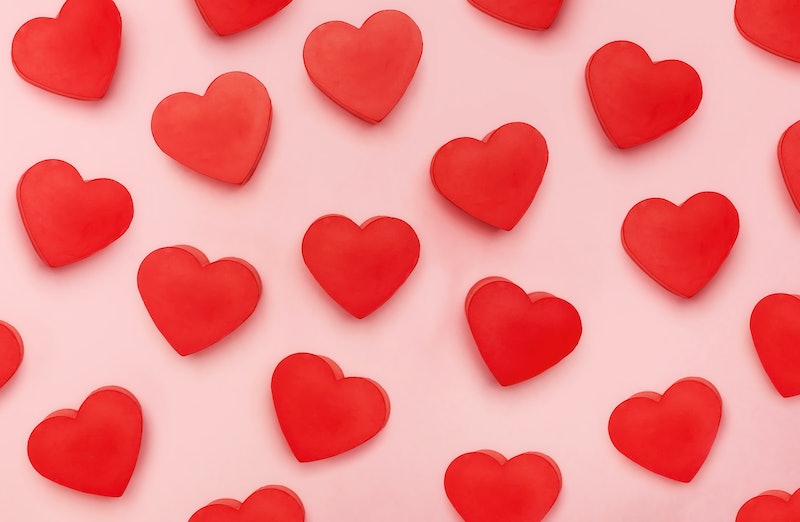 I probably don't have to tell you, but Valentine's Day is approaching fast . And even thinking about finding a date or scrambling to grab a reservation at a restaurant not prefaced by the term "fast-food" makes me want to just take a nap. Curling up into a ball of stress, I find myself thinking back to a seemingly easier time — a time where Valentine's Day wasn't so much about love, as it was about who got the most candy. Kissing was still foreign and gross, unless the Kisses were Hershey's.

Valentine's Day in the '90s was almost like a second Halloween, except all the candy was pink and red and heart-shaped. We weren't too preoccupied about being asked on a date, 'cause most of us couldn't drive; just the act of going out to eat by ourselves was still considered very adult.

Of course, there was some romance involved — hello mix tapes? The '90s had some great R&B hits that most of us were too young to fully understand, but sang along to anyway. Valentine's Day seemed more inclusive when we were younger — everyone got at least one Valentine, which was nice. And we wouldn't understand the meaning of Singles Awareness Day till high school. Thinking back, how we celebrated Valentine's Day in the '90s seems a lot more fun, actually.

So let's hop in our time machine otherwise known as nostalgia and take a trip back to a time when Boyz II Men was top of the charts and the halls of our middle school were decorated pink and white, y'all!

Remember reading waaaaay too much into the sayings on those little candy hearts? They might have been the least appetizing candy to eat, having almost no flavor accept for a vague chalky-sweetness, but they were coveted when it came to a crush. If you received a packet of hearts that read "Be Mine", "Kiss Me", or "Call Me" did that mean someone liked you liked you? And getting a heart that read "Let's Get Busy" would reduce everyone to embarrassed laughter.

Remember the days where we didn't sweat who we gave valentines to? Our parents would buy them in large packets at the drugstore, and then we would spend the day filling in the "To:" and "From:" for the whole class. Perhaps you gave your crush an extra special one, but no pressure. Luckily, there was no heartfelt message necessary— the Ninja Turtle, Power Ranger, or Looney Tunes valentine already said it all, probably in the form of a bad pun.

3. Learning How To Kiss From Movies

If Hollywood and Disney taught us anything growing up, it was that the kiss symbolizes the moment two people fall in love. As a kid you dreamt of what your first kiss might be like. Would that magical kiss be accompanied by crashing waves? Fireworks? The best movie kisses were the ones you could feel the heat and the chemistry between the two lovers, and the stakes were always high — really high, like in Titanic and Practical Magic. You would rewind the VHS to watch these kissing scenes over and over, picturing one day soon that you might lay a smackeroo on the cute Hanson brother!

4. Making Your Crush A Mixtape

Who needed cupid when you had a cassette player? Making a mixtape was like penning a love letter, but you could let the lyrics of favorite songs express your feelings. A little Backstreet Boys "All I Have To Give" and your beloved would surely swoon.

Going on Valentine's Day dates is awkward when you are not quite sure what a date is. When you're a kid, you know it involves dinner, and probably a movie, but you certainly do not have an end-game. At this point the date is more of an extended hang out, not quite a playdate. But, who knows, maybe by the end of it you will have a "boyfriend?" That would be cool. Either way, having dinner at the Cheesecake Factory and then strolling around the mall holding hands was pretty much as romantic as it could get. And if you break up during recess the next day, it's not the end of the world.

Before texting existed, and when instant messaging was still in its infancy, if you wanted to ask someone out, you had to call them. That's right — on the phone. It was indeed as terrifying as it sounds. Not everyone had their own private landline, meaning your phone call would most likely first be answered by your crush's mom or dad. Gross! Even worse, if nobody picked up, you would have to leave an uncomfortable voicemail asking your crush out or wishing them a happy Valentine's Day. And their entire family would probably listen to it — so no pressure.

The '90s were a great time for TV, and networks usually pulled out the stops for holiday-themed episodes. Nothing could get you pumped for a little romance more than a good Valentine's Day episode. Would those two characters finally get together??? What kind of mischief might befall our heroes on their dates? You would have to watch and see — which was certainly not a bad way to spend the evening.

Nothing is more confusing than trying to figure out where to put your hands while you sway back and forth to "Angel of mine." Nothing except being at the front of the grind-line, that is...