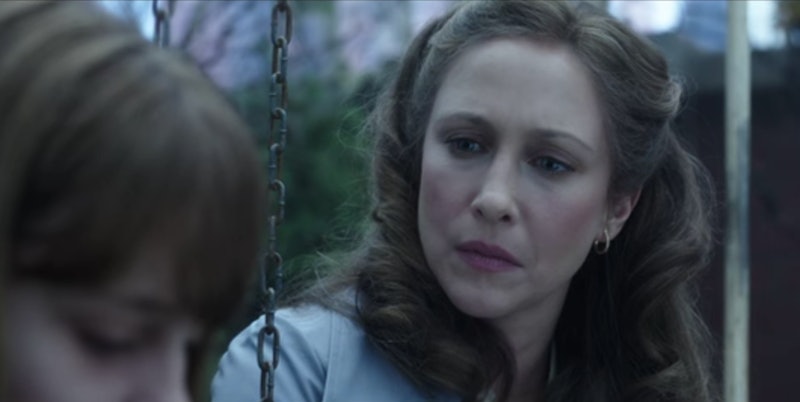 The highly anticipated sequel to the supernatural horror film by James Wan, The Conjuring, will premiere this summer, and to get us all excited and preemptively creeped out, its official teaser trailer just dropped. It's official: The two demonologists we all came to know and love and be slightly terrified of in The Conjuring — Lorraine and Ed Warren — are back for another haunted house case. This time though, the story has traveled across the pond. The Conjuring 2: The Enfield Poltergeist finds itself in Enfield, London, in 1977.

Even though they've changed locations — and jumped ahead six years — it doesn't seem like the filmmakers (Wan and his team of writers, Carey Hayes, Chad Hayes, and David Leslie Johnson) have skipped a beat. The teaser trailer opens to a pitch black screen, with Lorraine Warren asking an unidentified girl, "Do you know when the voice is going to speak?" The classic horror tropes are all present within the first 20 seconds — heavy wind, blowing leaves, the creaky swing set, an (almost) achromatic palette, and much like it's predecessor, The Conjuring 2 begins to conjure up a sense of retro familiarity by giving subtle nods to horror's arguably greatest era: The '70s.

As it's set in the '70s, the trailer's — and probably the film's — homage makes perfect sense. Though you wouldn't imagine, or maybe qualify it as one, The Conjuring 2 looks and feels like a period piece. The architecture of the home, the furnishings within it, the hair styles, and the costumes are all painstakingly accurate for that decade. Compounded by the visual stylings of a '70s horror classic — from the rolling credits halfway through the trailer to the near final shot of the young girl being trapped by demonic forces that served as the basis for many '70s horror films (The Exorcist, The Omen).

The trailer shows a variety of scenes that are all beautifully shot in their own regard. Distinctly grim, with pauses that hold for just a second too long — or too short — it all comes to a blow in the final moment of the teaser, when a demonic being leaches out through the walls. But, it's the buildup that's the best part.

It's the part that makes us feel uneasy — a feeling that '70s horror films refined, as '70s cinema reflected the anxieties of the decade. From what's going to happen in the final act of the teen with telekinetic powers, who just so happens to be fueled by her religious mother (Carrie) to other kinds of forces beyond our control, like a madman with a chainsaw (The Texas Chainsaw Massacre), or a masked murderer with a knife (Halloween). Near the middle of the trailer, we hear Lorraine ask the girl "What does it say?" The girl replies, "It says it wants to hurt you ... right now," setting us up for this same kind of controlled agitation. Like most '70s classics, the horror of it all feels abstract, yet alarmingly close.

Watch the full trailer below, and make sure to catch The Conjuring 2 when it's released June 10.

More like this
Michael & Kathleen Peterson’s House From ‘The Staircase’ Has New Owners
By Kadin Burnett and Kayla Blanton
Watch The Dramatic First Trailer For Netflix's Jennifer Lopez Documentary
By Alyssa Lapid
What Does Doctor Strange’s Third Eye Mean?
By Arya Roshanian
What’s New On Netflix: A Victoria Justice Rom-Com & The Return Of David Letterman
By Arya Roshanian
Get Even More From Bustle — Sign Up For The Newsletter