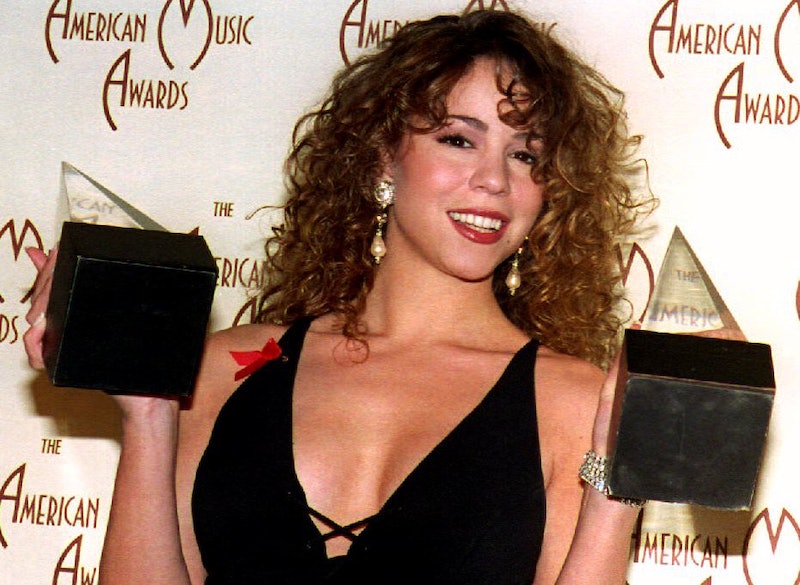 Living legend and the soundtrack to my junior high journals, Mariah Carey is internationally known for her powerhouse vocals and chart-topping singles. However, the singer wasn't necessarily a fashion icon, unlike her fellow '90s hitmakers like Madonna and Janet Jackson. In retrospect, most of Carey's outfits from the '90s were pieces that a lot of women wore at the time, whether they were chic wardrobe staples like LBDs and slip dresses, or more casual looks worn with a comfortable pair of jeans.

That's not to say that Carey's style didn't evolve throughout the '90s. During the first decade of her entertainment career, she was an ingénue with a penchant for wearing black 24/7, whether it’s a long sleeve top or a body-con dress. Her early music videos like “Vision of Love” and “Someday” definitely showed Carey’s youthful yet romantic style. It wasn’t until a few years later when she shed her girl-next-door image in the “Honey” music video — which Carey called her favorite look of all time — that showcased the singer as a confident, strong, and sexy pop star.

Proving that she’s not only the undisputed queen of Christmas, but also a style inspiration for so many, here are Mimi's 10 best looks from the ‘90s, ranked from Glitter to Daydream:

Carey was more of a music ingénue than a pop diva during her early years in showbiz, but she still slayed.

The singer added serious bling — a pair of Grammy Awards — to her classic LBD in 1991.

Carey showed skin in this body-positive ensemble at the 1997 MTV Video Music Awards.

The singer rocked biker chic for this early '90s photoshoot.

All we want for Christmas is Carey's chic take on Mrs. Claus.

You know at least one girl in high school — maybe even you — who wore this dress to the school dance.

Towards the end of the '90s, Carey had become one of music's reigning divas and she was more than happy to dress the part.