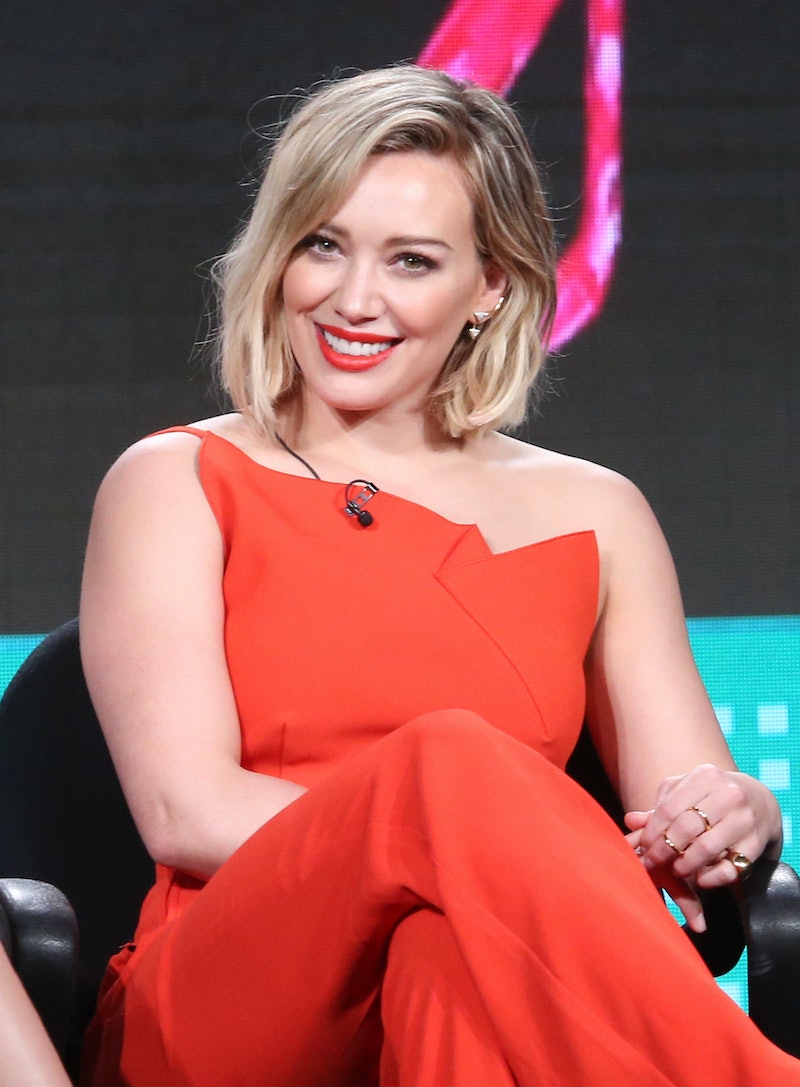 Fifteen years ago Lizzie McGuire made its debut on the Disney Channel, and the titular character — along with her animated narrator — made us feel like we weren't alone in navigating the crazy world of adolescence. The series premiered in 2001 and ran until 2004, but it remains beloved today. I think it's time to check out the Lizzie McGuire cast then and now, because a lot can change in 15 years. Actress Hilary Duff has gone from playing the precocious pre-teen Lizzie to being a mom to her own son. Feeling old yet?

Back in 2001, Lizzie and her friends David "Gordo" Gordon (Adam Lamberg) and Miranda Sanchez (Lalaine) were kids themselves in a Disney Channel world filled with homework, crushes like Ethan Craft (Clayton Snyder), popular mean girls like Kate Sanders (Ashlie Brillault), and even occasional trips to Italy, like in The Lizzie McGuire Movie. And nearly two decades later, you might be wondering what's going on with the rest of the cast — aside from Duff, who is still acting and even had a career as a pop star for awhile.

Then: Duff was 13 years old when she stepped into the iconic klutzy-but-cool shoes of Lizzie McGuire.

Now: Duff has been a pop star (anyone remember "Come Clean"?), a movie star (Cheaper By the Dozen, A Cinderella Story, The Perfect Man), and she's returned to TV in the TV Land series Younger, which premieres its second season later this month. She also married NHL hockey player Mike Comrie in 2010 and had a son named Luca in 2011. The couple divorced last year.

Now: Lalaine pursued a music career post-Lizzie and was a member of the band Vanity Theft for a few years. she She also had a small role in the 2010 film Easy A. Last year, she told the Huffington Post, "I hold a job down to pay the bills, and I've been doing all these random little projects."

Then: Lamberg played Lizzie's lovable BFF Gordo, who I always knew was totally perfect for her in the end.

Now: Lamberg is no longer acting. He graduated from UC Berkley with a degree in geography and an MPA degree from Baruch College in New York City. Lamberg currently lives in NYC and works as a development associate for the Irish Arts Center, according to MTV. He briefly had an instagram where fans were able to follow his post- Lizzie life, but has since deleted it.

Then: Thomas played Lizzie's scheming younger brother Matt, who was always out to annoy (or save) his older sister.

Now: Thomas continued to act for awhile, appearing in ER, Lie to Me, and The Secret Life of the American Teenager. He also works as a photographer.

Then: As a teen, Brillault played Lizzie's popular nemesis/former friend Kate, who was the original mean girl.

Now: Brillault is no longer acting. According to MTV, she's now a Denver-based lawyer specializing in civil rights and criminal defense and a mom to her baby daughter. And there seem to be no current photos of her online — talk about leaving her days in the Lizzie McGuire limelight behind.

Then: Synder was also 13 around the time of filming Lizzie McGuire, where he played the popular athlete Ethan Craft.

Now: After The Lizzie McGuire Movie, Snyder put acting on hold and got a degree at Pepperdine University, where he also played varsity water polo. Post-graduation, he played the sport professionally in Europe and has recently returned to acting. According to an interview with MTV, he appeared in a Back to the Future musical production in the fall, as well as a USC film school short film.