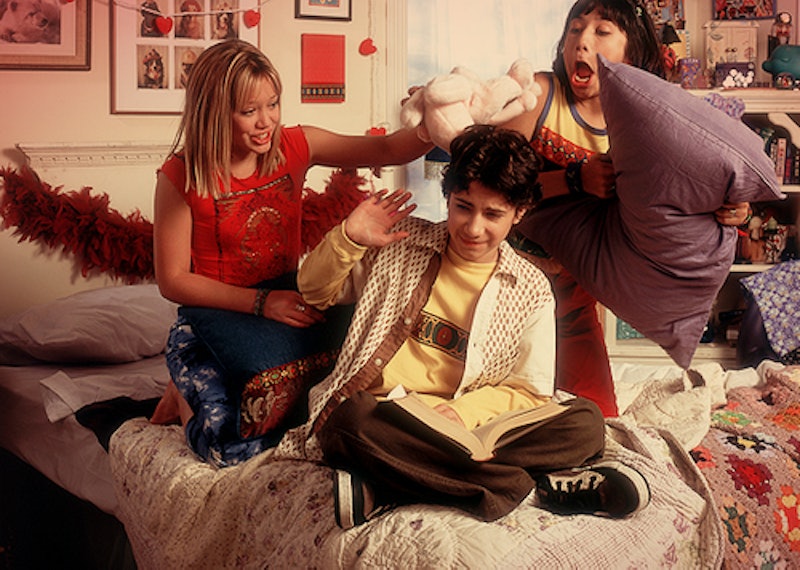 Hillary Duff is still a household name, but only '90s kids would know her better by her former name: Lizzie McGuire. Before Hillary Duff married Mike Comrie, she was playing an average teenage girl in the 2001-2004 Disney Channel Show that paved the way for later shows like Hannah Montana and Wizards of Waverly Place. Before we hoped that Kim Possible and Ron Stoppable would get together, we were all hoping Lizzie McGuire would notice Gordo, her sarcastic, level-headed off-beat dork of a best friend. But while Hillary Duff has gone to achieve other fame, Adam Lamberg, who played David "Gordo" Gordon, has completely fallen off the radar. Does anybody know where Adam Lamberg a.k.a. Lizzie McGuire's Gordo is now?

Lizzie McGuire may have had loving parents, an annoying younger brother, an a cartoon alter-ego, but the only way she truly made it through the hell that was high school was with the help of her two best friends, Miranda and Gordo. Gordo and Lizzie had been best friends since they were babies and he was a straight-A student whose maturity and practicality made him a perfect foil to Miranda and Lizzie's wild adventures in being cool. Lamberg was a main character for the entire series and the finale movie and, as Gordo, he was an adorkable weirdo who marched to the beat of his own drum.

Well, it appears that art imitated life. Just like Gordo hated being a follower and preferred to do his own thing under the radar, so too did Adam Lamberg quit the acting industry. After The Lizzie McGuire movie, he starred as Lionel in When Do We Eat? in 2005 and then as a young Reggie in Beautiful Loser in 2008. Beautiful Loser was his last acting role to this day. That same year, Lamberg graduated from UC Berkley with a bachelor's degree in Geography.

From 2012 to 2014, Lamberg attended Baruch College where he got an MPA. He currently works as a developmental associate at the Irish Arts Center in New York City. Through IAC, Lamberg maintained a small foothold in the entertainment industry. He appears to flourish best when the cameras and spotlights aren't on him, but he and the rest of the IAC staff aren't so private that they aren't willing to take selfies with Jimmy Fallon.

In addition to his work for the Irish Arts Center, Lamberg has maintained a very strong Internet presence. He has an Instagram, an active Twitter feed, and a Tumblr which just went live in January 2014. When Lamberg announced the news of his Tumblr blog, he even graciously answered fan questions about how he's been and what he's been involved with since the end of Lizzie McGuire.

If he's seeing anyone, then he's given no indication of that on any of the three sites. His most serious relationship at the moment seems to be with himself. Lamberg has posted three mirrored pictures of himself side-by-side, the last of which was captioned, "Date # 3 and I think it's getting serious between us two."

Aside from that, Lamberg seems to be very much into social awareness if his Twitter is any indication. He often warns against mass consumerism and tweets inspirational life quotes, though apparently he hasn't kept in touch with Hillary Duff or with Lalaine, who played Miranda on the show. 2013-2014 seems to be an incredibly active cycle for Lamberg more than any other, but why wouldn't it be? He's graduated from school, he appears to have a job that he loves, and he's finding ways to keep himself busy.

According to him, "Life is fantastic, though I constantly have too much time on my hands and am constantly struggling to find intriguing and creative ways with which to fill it. Other than that, very little to complain about... (Who am I kidding? I'm a New Yorker. We love to complain.)" If that's not something Gordo himself would have said, then we must not have been watching the same show.

More like this
Netflix Reveals First Look At Wednesday In The 'Addams Family' Spinoff Series
By Bustle Editors
The Best 'Grey's Anatomy' Intern Moments, From MAGIC to Glasses
By Grace Wehniainen
24 Years Ago, 'Friends' Dropped Its Most Underrated Ross & Rachel Episode
By Grace Wehniainen
Lindsay Lohan & Jonathan Bennett Celebrated Mean Girls Day Very Differently
By Jake Viswanath
Get Even More From Bustle — Sign Up For The Newsletter