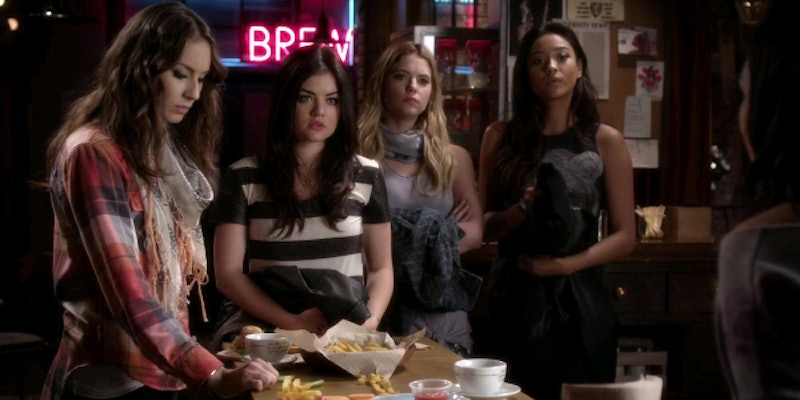 She's back... and so are her old ways. ABC Family's Pretty Little Liars returned three weeks ago, and the fact that Alison DiLaurentis is alive has already driven a wedge between the liars. The wedge is so great and so apparent already that we're left wondering whether or not this has always been her plan: to return and break up the group that formed in her absence. On Tuesday night's episode, "Close Encounter," Alison singled out Emily and forced another liar to hide something from the group. For someone who missed her friends so much, it sure doesn't seem like she missed all of them.

We learned early on in the show that Ali both brought the group of girls together and continuously drove wedges between them while she was alive. Which, when you think about it, is typical leader behavior — bring the people together, but keep them enough apart so that they won't gang up on you when you're terribly shady, which Ali really was. It's also a lot easier to keep secrets when you're not letting people get close enough to one another to swap stories and you know that was something very important to Ali's existence — especially with her group of friends. (It also explains how NO ONE knew that Shana and Ali have been friends since they were three years old.)

After seeing last week's episode, we're wondering how we didn't see the red flags that Ali's big reveal about being alive and her return-ish to Rosewood meant really bad things for the girls that bonded in her absence. Just a little refresher: Ali enlisted Shana (who's apparently known she's alive the entire time) to tell Emily that she wants to meet her alone. And by alone, she means that none of the other liars are allowed to come, nor is Emily to tell them that she's meeting Ali. That sounds pretty sketchy to you, doesn't it? Emily obviously told Spencer, who followed her to their meeting place — because of course Spencer would do that — and ruined everything. Ali freaked out, Emily freaked out, she screamed at Spencer, and then she bolted.

Why would Ali act that way if she missed ALL of her friends so much? She wouldn't. Why would she single Emily out, leading Shana to speculate that Emily was always her favorite? Answer: Because something is absolutely not right here. She's picked her weakest, most easily manipulated link and latched right on. But Emily can't see that because she's been in love with Ali for years. So when Spencer followed her and scared Ali away, she got pissed — she liked being singled out and made to feel special. And there's the wedge.

So can we really trust that Alison DiLaurentis isn't just playing her friends the same way "A" has? Is she slowly going to break down their friendship until they're back where they started in the first season, as nothing more than acquaintances with something in common? It looks like that might be the case, but we'll just have to w'A'it and see.