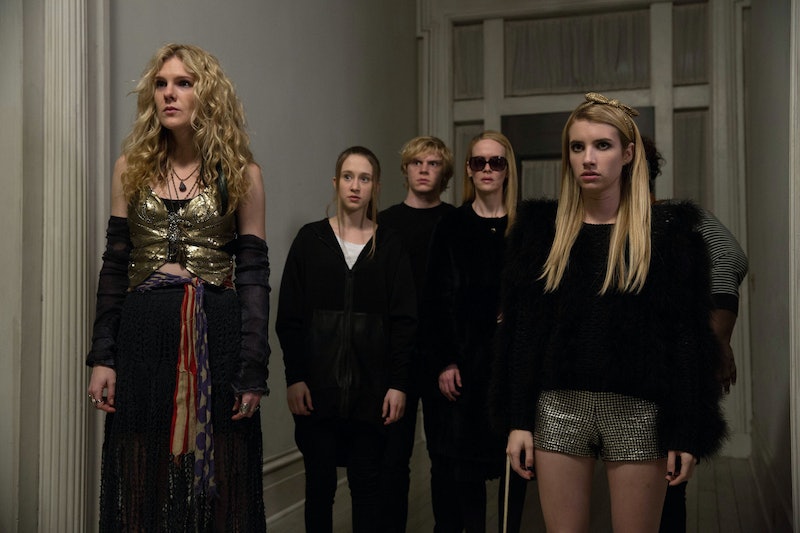 Writing these recaps can be difficult, because the fact is: No one’s ever really dead on American Horror Story. Characters' swan songs can be memorably gruesome, macabre affairs in which you think there’s NO way anyone could come back from that. And maybe they sit out an episode or two, hampered by the fact that their body is burned or their head detached or their soul confined to Papa Legba’s voodoo pantry. But you know they’ll be back before long, spouting profanities at the witch(es) who wronged them and making light of their time in Hell. Death is a semicolon at Robichaux’s, not a period.

Obviously, this strengthens job security for the actresses whose death on another show would mean staring down unemployment. But it also throws into sharp relief one of the problems that AHS as a series has always faced, and will probably always face: How can we truly care what happens when we know that anything and everything can be reset?

AHS is, no joke, among the most entertaining shows on TV. Where something like Nashville or, I don’t know, Bones is content to play judiciously by the rules and introduce a “game-changing” plot point every five or six episodes, AHS is remaking itself on an almost hourly basis. First the season is about this war between Fiona and Laveau! Now it’s about fending off an ancient order of witch hunters! Now it’s about the pitfalls of resurrection! This person’s dead, then they’re not, then they sort of are but not really. Up is down is left is right is crazy.

Consistently fun and engaging, but it comes at a price. And that’s the fact that so many curtain peels and rug sweeps later… you can’t really trust the show. And if you can’t trust the show, none of the drama amounts to much.

It really hit me at the end of this episode, one in which Misty was brought back to life, Delphine and Laveau sentenced to an eternity in hell, and — most significantly — Fiona brutally axed to death by the jilted Axeman. Now, there’s every chance that Fiona really is dead, that AHS took a page from the HBO playbook and positioned its crazy climaxes in the penultimate episode, with next week more of a “post-mortem” (LOL on a show where no one dies) than anything else. THAT would be truly crazy!

…but come on, Fiona isn’t dead. As wonderful as the line “even I can’t bring somebody back after they’re gator shit” is, she can definitely be brought back. And she will. The final episode of the season can’t merely focus on the crowning of the next Supreme; it’s got to properly send off the old, in a far more appropriate/horrific way than via axe to the back. But you know what? Since we know (or at least strongly suspect) that this might happen, what's the real impact of her death this week? How shocking can an axe to Fiona's back be when she and every other witch on this show have already proved themselves borderline indestructible?

I'm not even that annoyed, really I'm not. I love AHS. Sacrifice all the basic tenets of dramatic structure if it means a show this bat-shit fun! But on its end-of-season "Things to Improve" scorecard, taking a look at the frequency of twists and resurrections doesn't seem like the worst thing Ryan Murphy & Co. could do.

NEXT WEEK: The End