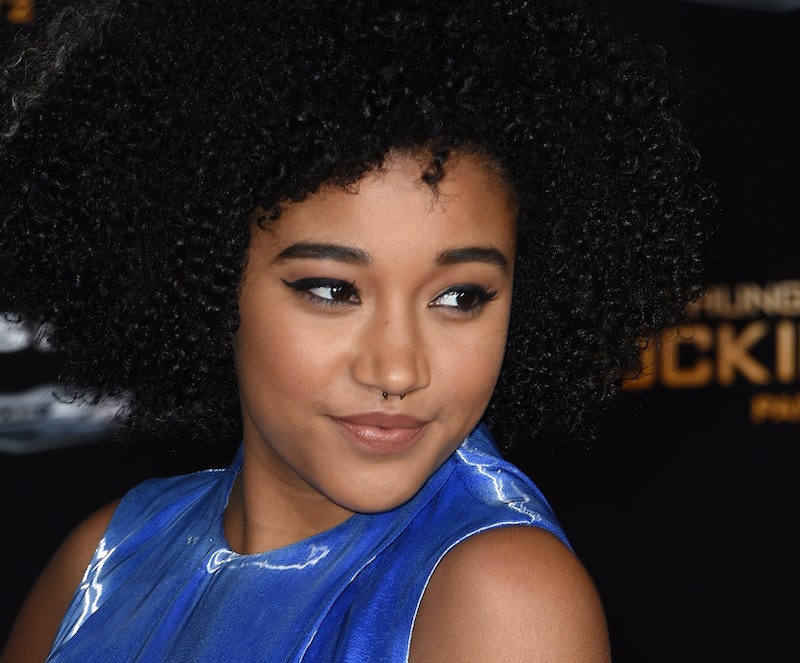 Saying Amandla Stenberg is an inspiration is a serious understatement. The 17-year-old actress, best known for her role as the precious Rue in The Hunger Games, has been a phenomenon for literally as many years as she has been alive — and Thursday was no exception. In honor of her inaugural cover for the February issue of Teen Vogue (in which she was interviewed by fellow "non-conforming black girl" Solange Knowles, #nbd) Stenberg took over Teen Vogue' s snapchat to powerfully share she's bisexual, while empathizing the importance on the fight against suppression and the beauty behind identification.

"I cannot stress enough how important representation is. It's a really, really hard thing to be silenced and it's deeply bruising to fight against your identity and to mold yourself into shapes that you just shouldn't be in," Stenberg said in the Snapchat video she later posted on her personal Tumblr. "As someone who identifies as a black, bisexual woman, I've been through it and it hurts and it's awkward and it's uncomfortable," she said. "But then I realized because of Solange [Knowles] and Ava DuVernay and Willow [Smith] and all the black girls watching this right now, that there’s absolutely nothing to change.”

Stenberg went on to talk about the deep importance in seeing one's self positively represented in the media and the world at large, but the beauty behind the growth of doing so is both groundbreaking and enormously powerful: "We cannot be suppressed. We are meant to express our joy and our love and our tears and be big and bold and definitely not easy to swallow... here I am being myself and it’s definitely hard and vulnerable and it’s definitely a process but I’m learning and I’m growing."

It's safe to say that Stenberg is a powerhouse — and given her rare ability in today's society to embrace her sexuality and speak up for her herself, she's clearly made it her mission to the show the world who she is. It's an asset that all young women of today need.

Stenberg closed her video by saying she is accepting herself — which is a hard thing to do — but the journey to acceptance everywhere is just on its first chapter: "This is just the beginning... we have a lot of work to do, for all women of color. I mean, we need more representation in film and in television, and we need our voices to be louder in the media. And not just women of color, I mean, bisexual women, gay women, transgender women, mentally ill women. I’m sick of all the misogyny and homophobia and transphobia that I see around me, and I know you are, too.”

Stenberg later continued to spread her truth by tweeting out the clip, with the caption: "...Bi black girls unite," which you can see in full below. Mom, I want to be just like her when I grow up!

More like this
Lizzo & Myke Wright's Relationship Hit A New Level With Their "Hard Launch"
By Stephanie Topacio Long
24 History-Making Black Women You Probably Didn't Learn About In School
By Ayana Lage and JR Thorpe
25 Inspiring Quotes From Black Women To Celebrate Black History Month
By Kyli Rodriguez-Cayro and JR Thorpe
"Lavender Haze" Star Laith Ashley Breaks Down Filming With Taylor Swift
By Jake Viswanath
Get Even More From Bustle — Sign Up For The Newsletter
From hair trends to relationship advice, our daily newsletter has everything you need to sound like a person who’s on TikTok, even if you aren’t.