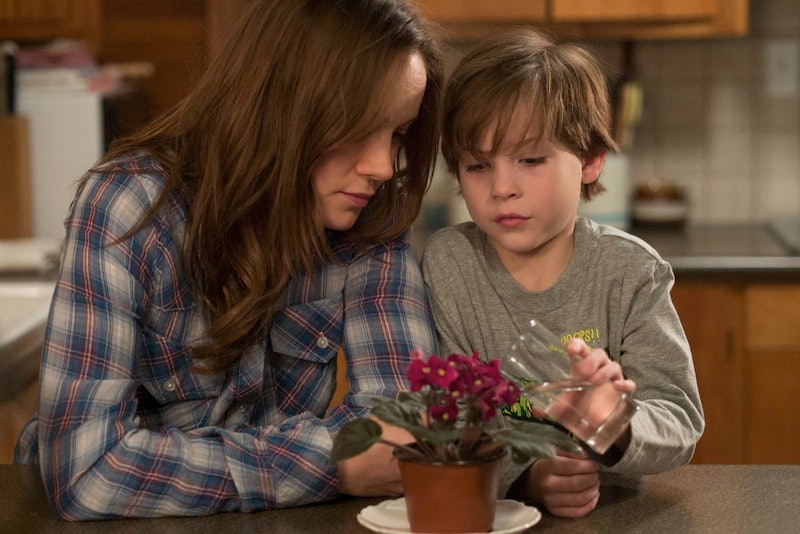 There are only so many movies I can remember that have left a lasting impression on me, but 2015 drama/thriller Room is number one on that list. Since watching the film, I have not been able to stop thinking about it — and it seems that critics, who are calling the film one of the most "wrenching and rewarding offerings of the year" according to The Wrap, agree as well. So, it comes as no surprise that Room is nominated for three Golden Globes this year — the movie deserves that and even more.

Based on the best-selling novel by Emma Donoghue, Room allows you to travel into the garden shed home of five-year-old Jack (played by Jacob Tremblay) and his mother, Joy "Ma" Newsome (played by Brie Larson), where they are being held captive by "Old Nick" (the biblical name for the Devil). Joy does her best to spin tales and create a protected, yet falsified world of imagination for her son in an attempt to normalize his life. But what could be normal about being held against your will for seven years in a 10-by-10 room where a complete stranger comes to drop off supplies and rape your mother while you count to 100 in a wardrobe?

The film's dark premise alone was hard enough for me to watch. It was so intense, yet incredibly rewarding and moving. I cried endlessly as my heart ached for this little boy who never saw sunlight, and his mother who had to convince him that trees and leaves were real and not from the TV. If the storyline isn't reason enough for Room to win the three Golden Globes it is nominated for (Best Motion Picture — Drama, Best Performance By An Actress In A Motion Picture — Drama and Best Motion Picture Screenplay), here's seven more reasons why:

1. It Shows The Most Powerful Bond Between Mothers and Sons I Have Ever Seen

Rarely have I seen a film depicting a mother sacrificing so much for her child. There is amazing scene after amazing scene of a mother teaching her son to wiggle out of a carpet to escape the hells of confinement, to her yelling at her father to look at her beloved child despite the fact that he was conceived with her capturer, to her returning to "Room" where she was held for seven years of her life just so her son could say goodbye. I saw love. I felt love.

2. It Has Real And Meaningful Life Lessons

This film is very much a testament to how to live well in inconceivable circumstances that life throws you in, and the many ways creativity and imagination are able to sustain us. Just wow.

3. It Has A Subtle, Yet Chilling Portrayal Of Post-Traumatic Stress Disorder

There's a scene in the movie following Joy and Jack's escape that a doctor tells Joy it's a good thing Jack got out when he was still "plastic" — a term to describe Jack's brain plasticity when children are most vulnerable to negative environments, but the most capable of a healthy recovery. She noted it was ultimately a good sign of his ability to transition into to the real world without issue (though, it being the first time he saw sunlight, he had to wear sunglasses. I know, my heart is still breaking too.) Joy, however, is not plastic and she doesn't have the emotional experience to process what has happened to her. So, she becomes stuck. She lashes out at Jack, sleeps most of the day, and even tries to end her own life. You feel her suffering. It is raw. It is real. It is painful to watch.

4. Even Though Jack Is Faced With A Devastating Upbringing, He Never Loses His Innocence

Somehow, screenplay writer and author Donoghue, as well as director Lenny Abrahamson, made it possible for me to feel as though Jack never lost his innocence despite his traumatic life experiences. Seeing his mom be strangled by a stranger, foaming at the mouth, or yelling to her "I hate you" at the top of his lungs as he rolled out of a dusty floor carpet, Jack's character and presence on screen always felt sheltered and he remained curious, yet with real terror and panic. Abrahamson's willingness to remained focussed on Jack, no matter where the film went, allowed me to feel Jack's happiness ignite when adult attention was placed on him, yet truly crumble and struggle when he was forced to use his own imagination rather than his mother's when he was left alone. Even his voiceovers filled me with the slight joy of childhood ignorance that I could only pray he would have. Here's Jack explaining his birth to his mother: "Once upon a time, before I came, you cried and cried and watched TV all day, until you were a zombie. But then I zoomed down from Heaven, through skylight, into Room. And I was kicking you from the inside. Boom boom! And then I shot out onto Rug with my eyes wide open, and you cut the cord and said, 'Hello Jack!'" It was so refreshing, even in the darkest corners of the film.

5. I Still Get Chills When I Watch The Trailer Despite Knowing What Happens In The Movie

I have no idea what it is, but this trailer always gets me, always moves me and always sends shivers down my spine. Here, see for yourself.

6. The First Hour Of The Film Is So Harrowing, You Become Relieved When It Twists And Turns

This true-crime narrative has scary real-life realities. The major revelations of how Joy got to "Room" and how she came to raise a child there were devastating.

7. It Leaves A Lingering Emotion

This movie, whether it be from the grim plot or the incredible acting performances by Tremblay and Larson, had me hooked from beginning to end. And it was a film that mattered. It pulled me by the heart strings and didn't let go because it felt like it could happen to me. It felt like my neighborhood (I am a Torontonian and it was filmed here, what whaatt), it felt like a similar reality, and most importantly, it felt like hope for a possible outcome from the impossible. It was a roller coaster of emotions and it was terribly unapologetic.

Honestly, if Room doesn't win this Sunday night, I really won't understand it, because it's pretty clear this one is a winner for life. And if any of you reading this have yet to see the film, prepare to be moved, shifted and deeply impacted. And really, um, what are you waiting for?