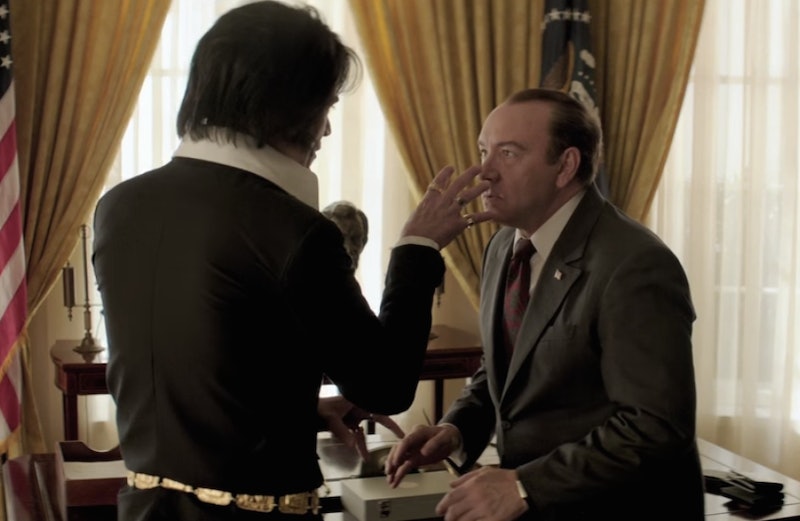 I'm going to level with you, here — I never knew that Elvis Presley and Richard Nixon ever met, let alone that they took a photo together that had captured the eyes and imaginations of millions of Americans. However, that did indeed happen. One of the most famous and influential rock 'n' roll singers met one of the most controversial American presidents in December 1970 and the rest, as they say, is history. In fact, such a mythology has been developed around that picture that a movie's been made about the "untold true story" behind it, and now that the first trailer for Elvis & Nixon is out, I'm left with so many unresolved questions (as well as a slight sense of bemusement).

The wonderful Michael Shannon plays Elvis, which is an odd casting choice, I have to admit. Shannon is one of the finest actors (and one of the most underrated) out there, but playing the King? Eh, I kinda can't get my head around it. Kevin Spacey is playing Nixon, which makes perfect sense on multiple levels and I'm totally down with it. The movie itself aims to show the humorous nature of the relationship between the two public figures, painting Nixon as a lazy do-nothing with a penchant for sugar (hence the Dr. Pepper and bowl of M&Ms kept in the Oval Office) and Elvis as a gun loving, Beatles hating weirdo. Perhaps neither are too far from the truth, but I can't help but think Elvis & Nixon might be more than a little farcical.

Here are the best parts of the Elvis & Nixon trailer, and believe me, there are plenty that even gifs can't do justice:

Elvis' Arrival At The White House

The story goes that Elvis showed up to the White House with a note for President Nixon that he insisted on delivering personally. Clearly, his arrival was a bit of a shock to just about everyone. It was a different time, however, as it doesn't seem to have taken much for Elvis to gain access.

The First View Of Kevin Spacey As Nixon

I mean, it's certainly a far cry from Frank Underwood, but he just seems to have fit quite naturally behind that desk, don't you think?

I mean, Michael Shannon's face! This is just the most bizarre casting ever in probably the best way possible.

Because Elvis wore a bunch of fancy costumes, he believed himself (at least in this movie) to be a master of disguise that was also capable of being a federal agent. I can't imagine this actually being true in any way so I'm skeptical, but it's a hilarious premise, nonetheless.

Admittedly, I don't know too much about Elvis Presley, but apparently he really, really loved guns... so much so that he brought a ton of them to the White House with him. God, this movie is going to be good.

Are you getting the feeling yet that this is going to be Michael Shannon's movie? Elvis is classic in this. After being briefed before meeting Nixon not to touch his bowl of M&Ms or his bottle of Dr. Pepper, Elvis helps himself to both. Classic Elvis!

The photo that made this movie possible. How could we not love it?

Watch the full trailer for Elvis & Nixon below and don't even dare forget to go see this when it comes out on April 15.