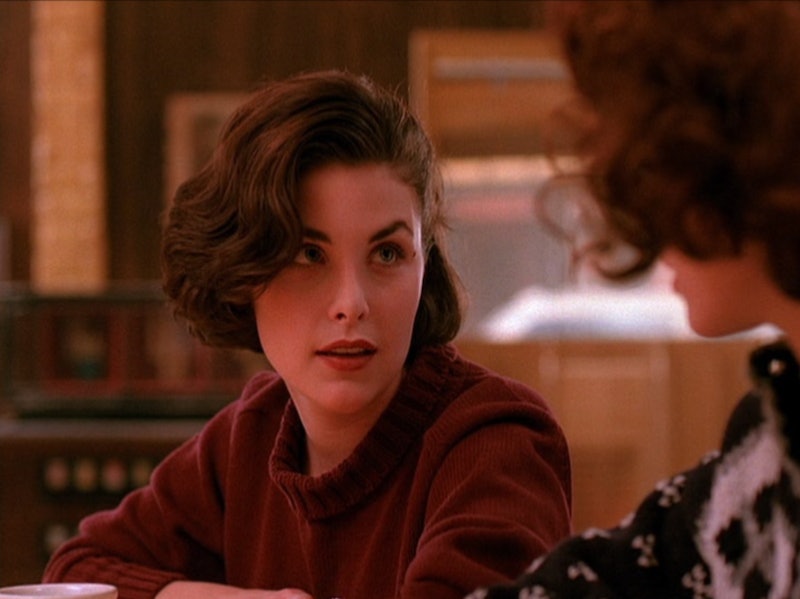 Details about the revival have been characteristically mysterious, but at least this is official: Sherilyn Fenn will return to Twin Peaks as Audrey Horne in the upcoming reboot, which is being helmed by David Lynch. Rejoice! Deadline initially reported that the actor would be returning to Showtime's reboot of the '90s show on January 8, and Fenn herself confirmed it by posting the link to her Twitter. Previously, only Kyle MacLachlan's reprisal of his role as Special Agent Dale Cooper had been confirmed, though Sheryl Lee, who played Laura Palmer, and Jennifer Jason Leigh, who was not in the original series, were also spotted on set.

Confirmation of Audrey's involvement is great news for the series reboot, which has experienced quite a few rocky starts and stops. In the original run of the series, Audrey Horne became a fan favorite; her vintage style, tendency to do and say whatever she felt like, and dreamy disposition made her the series' most recognizable figurehead other than Laura Palmer and Agent Cooper. Of course, though, she was a high school student in the series, and Fenn is now 50 years old — so Audrey will presumably have grown up quite a bit when the series returns. To celebrate confirmation of Audrey's return, here are the most memorable Audrey moments from the original Twin Peaks series. (For those who haven't watched the original series, SPOILERS AHEAD.)

In one of her first scenes in the series, she's looking quite different than she does later on — and demonstrating her strange brand of self-aware craziness. Is anyone in Twin Peaks really "here"?

2. Dancing In The RR Diner

Audrey's dance was one of the strangest early scenes in the series, and was one that suggested that all the inhabitants of Twin Peaks might be dreaming or crazy or both.

3. Her Crush On Agent Cooper

The fact that she turns his title of Special Agent into a term of endearment is adorable/weird, though I'm glad her crush remained mostly unrequited.

Lots of people had/have a crush on Audrey Horne, a crush that this scene solidified.

A character she was born to play.

6. Losing Her Virginity In Her Boyfriend's Airplane

Audrey experienced a lot of scary sexual encounters, so it was nice that losing her virginity was relatively sweet — and definitely badass.

7. Smoking In The Bathroom

Though I'm not endorsing smoking, I am endorsing the cinematography here. This shot is so memorable.

8. Her Style, In General

Eschewing the excellent frumpy sweaters of other Twin Peaks characters, Audrey managed to find the perfect combination of vintage and sexy.

9. When She Decided To Grow Up

At the beginning of the series, Audrey was a spoiled brat, but as the show went on, she grew up quickly and became lot more sympathetic and compassionate.

Unfortunately, it will be over a year before we see any new episodes Twin Peaks. But at least they seem to be getting it right. Audrey/Sherilyn, we can't wait to have you back.