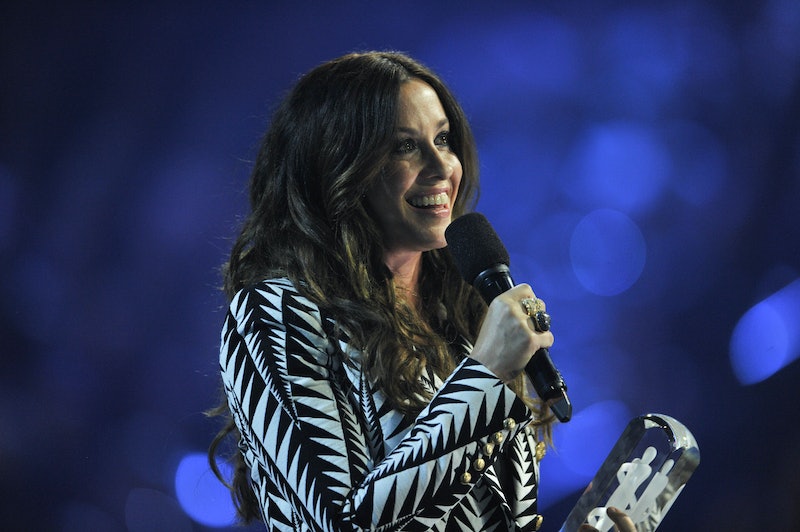 With news that legendary singer-songwriter Alanis Morissette is to have her own advice column in the Guardian Weekend magazine, it seems appropriate to consult her songs for all of the lessons she has already taught us. I don't know about you, but Morissette has soundtracked so many of the important moments of my life. Full disclosure — I'm not one of those Jagged Little Pill fanatics, who dismiss anything she's done since. I'm a completist, and actually think there are better albums than Morissette's first mainstream release. For instance, follow-up Supposed Former Infatuation Junkie is eclectic and challenging in all the ways that Jagged Little Pill's not. But my total favorite Morissette album of all time is 2002's Under Rug Swept.

However, instead of arguing about which Alanis Morissette album is the best, it'd be far more sensible to document all of the times she's already given the best advice, like, ever. If you've got a question for Morissette, you can email her at ask.alanis@theguardian.com, and hopefully she'll answer you when her column starts on Jan. 16, 2016 in the Guardian Weekend. But if, like me, Morissette has already gotten you through some tough times, maybe you'll join me in turning to her music, and helping decide which Alanis Morissette songs contain the best advice.

"I know he's blood but you can still turn him away, you don't owe him anything."

This advice may sound brutal at first, but it's an important lesson to learn. As a human being, you're responsible for yourself, only.

2. "So Unsexy" From Under Rug Swept

"Somewhere along the way I think I gave you the power to make me feel the way I thought only my father could."

Morissette often writes about being in situations in which she's inadvertently given her own power away, despite being a strong person at heart. Realizing that you're not in control, but want to be, is the first step.

3. "This Grudge" From So-Called Chaos

"I want to be big and let go of this grudge that's grown old. All this time I've not known how to rest this bygone... I wanna forgive for the both of us."

Sometimes, a grudge can eat away at us. Dealing with a situation head on — and making the decision to forgive — can be a real weight off of your shoulders.

4. "Moratorium" From Flavors Of Entanglement

"I declare a moratorium on things relationship. I declare a respite from the toils of liaison. I do need a breather from the flavors of entanglement. I declare a full time out from all things commitment."

Sometimes, being single really is the best thing, and there's no shame in taking a time out.

5. "Out Is Through" From So-Called Chaos

"My tendency to want to do away feels natural. My urgency to dream of softer places feels understandable. But I know the only way out is through."

It can be easier to give up, rather than work at something, especially when things get tricky or hard. But sticking with a problem, and working through it, is often the best solution.

"I used to be attracted to boys who would lie to me and think solely about themselves. And you were plenty self-destructive for my taste at the time. I used to say the more tragic the better."

Recognizing past behaviors, especially when they involve always being attracted to a certain type of love interest is an important part of growing up. It's about realizing who you are, and what you need from a partner.

7. "You Learn" From Jagged Little Pill

"I recommend getting your heart trampled on to anyone. I recommend walking around naked in your living room."

This is one of Morissette's most iconic songs, and its message is clear: You've got to live through the tragedies, the joys, and the surprises, because that's what life is. Having your heart broken may hurt like hell, but it's the only way you'll discover what you really want out of life.

"These are 21 things that I want in a lover. Not necessarily needs but qualities that I prefer. I figure I can describe it since I have a choice in the matter."

It's fine to ask for you want. In fact, it's the best. Morissette's song about sexual empowerment is bold in all its statements. You get to make choices about your body, and this includes who you choose to have sex with, how, and when.

9. "Precious Illusions" From Under Rug Swept

"I want to decide between survival and bliss. And though I know who I'm not I still don't know who I am. But I know I won't keep on playing the victim."

Realizing that only you can be your own savior is an important part of self-development. The sooner you realise that no one is going to sweep you off your feet and make your whole life perfect, the better! And it's OK to not know what you're doing with your life. Everyone feels that way sometimes. Just keep going.

As Morissette's songs prove, she's already the best advice giver there is. Which is why I can't wait for her new column! Now, I just need to think up some super important questions to ask her.