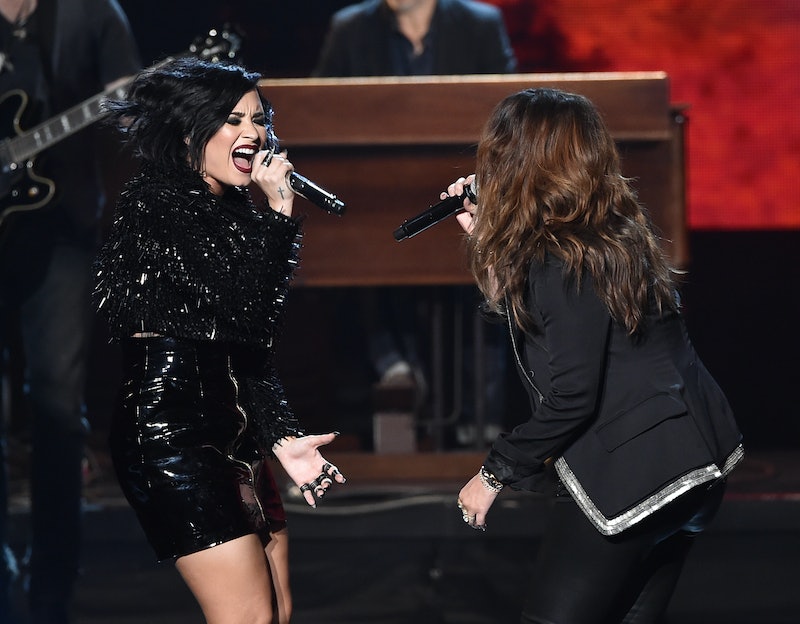 Jagged Little Pill was basically a staple in every '90s girl's CD collection (yes, back in the dark ages when CDs were still a thing). The album released in 1995, but Morissette's music was groundbreaking and it remains highly relevant all these years later. To celebrate the 20th anniversary of the unforgettable single, Alanis Morissette and Demi Lovato sang "You Oughta Know" at the American Music Awards and it was most definitely the highlight of the show for this '90s girl. Although, I must say — I totally did not understand the meanings of a lot of these lyrics as I sang along to them in third grade, so this performance was pretty enlightening as well as nostalgic.

Instead of taking the stage solo, Morissette collaborated with Lovato for the performance and it was a smart move. It certainly doesn't mean that Morissette is a "has-been" or that she can no longer hold her own — in fact, she sounds better than ever and has certainly not lost any of her energy. Rather, it shows that she's supportive of the young women in the music world who are working hard to become legends just like her. Morissette and Lovato made a great team and the performance was a little different than others that we saw at the AMAs. There were no fancy lights or bells and whistles — it was just two women with strong voices rocking out as they belted "You Oughta Know." And, anyone who denies singing along from their living room is probably lying.

Although it was Morissette's song and her moment, Lovato more than held her own — and her voice harmonized with Morissette's perfectly.

I really hope Morissette and Lovato collaborate on stage again soon — it's a musical match made in heaven.

More like this
Demi Lovato's New Song "29" Hints At Their Age Gap From Ex-Boyfriend Wilmer Valderrama
By Jake Viswanath
Now That 'Renaissance' Is Here, Let’s Revisit Beyoncé’s First Solo Album From 2003
By Grace Wehniainen
Demi Lovato Has Retired Her Blunt Bangs For A Tousled Fringe
By Darshita Goyal
Jennette McCurdy’s First Kiss On 'iCarly' Didn’t Go As Planned
By Bustle Editors
Get Even More From Bustle — Sign Up For The Newsletter