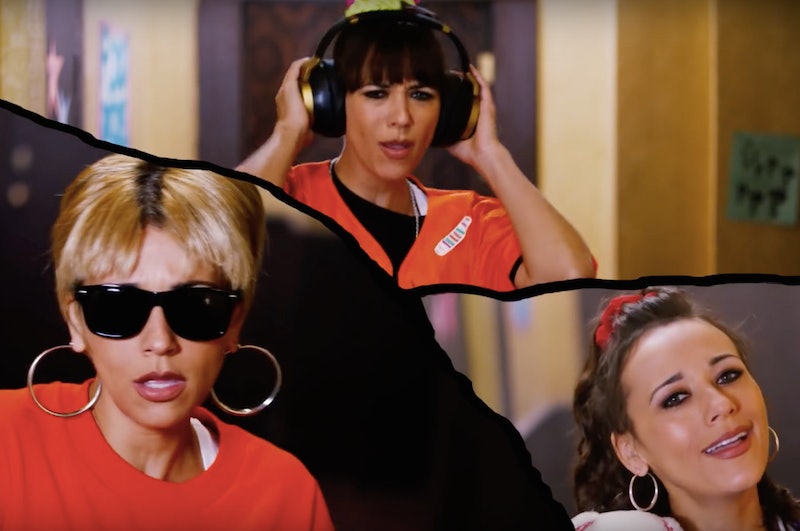 Apparently, Rashida Jones, known for her portray of the sweet angelic Ann Perkins on NBC's Parks and Recreation (and for starring as head funny woman on the upcoming Angie Tribeca), has really been missing the '90s. While most of us express our '90s nostalgia by binging on The X-Files and wearing neon scrunchies in our hair, though, Jones clearly takes her love of the '90s to a whole new level. Case-in-point: Rashida Jones starred in and directed "Flip and Rewind," aka the music video for her single — and also aka greatest and most '90s thing you have ever seen in your entire life since the actual '90s.

The video and song pay homage to the many greats of '90s R&B and hip-hop, like TLC, Mary J. Blige, Boyz II Men, Brandy, and LL Cool J. The list could go on and on but you get the idea — this video takes the best stuff from '90s and creates a delectable treat of nostalgia insanity. Also, if you're looking for hip-hop heavyweights to cameo like its no big deal, that's also a thing in this video.

Even cooler is that Jones clearly keeps things in the family. The daughter of Quincy Jones (aka the man who made Michael Jackson a thing), Rolling Stone reports she teamed with her nephew Sunny Levine for his "Boss Selection" project to create this gem. Because, like The Fresh Prince of Bel-Air taught us, family is everything.

The greatest thing about this video, though, is just how many feels and instant flashbacks to the '90s it will give you. Prepare to be take a trip down memory lane, folks:

Man Of The Decade

It is sometimes hard to imagine that one man brought us Kris Kross, Mariah Carey's "Always Be My Baby," and Destiny's Child's debut album, but its true — and his name is Jermaine Dupri. He is king, and he is in this music video.

This Was All Of Us

Like literally in the '90s, this was us, because we were children.

Is that T-Boz from TLC? Nope, it's Jones, looking fly and dressed as T-Boz. Man, I miss TLC.

No '90s video would be complete without some synchronized dancing. Get it girl.

This Backpack Is Life

I want this backpack and I want it now.

Where does one even get a cell phone like this, nowadays?! Does she shop at the same place Adele does? Jones is a true artist.

Check out this '90s greatness for yourself. Warning: Abundance of '90s nostalgia ahead.

Slay, Rashida, the new queen of the '90s hip-hop scene. We are not worthy of your greatness.