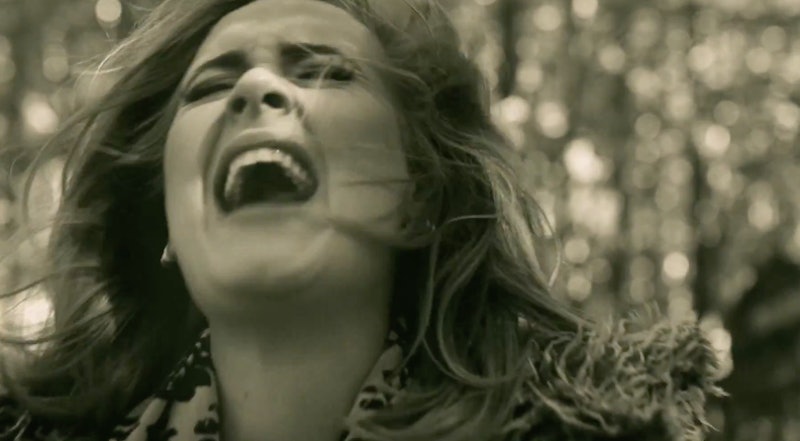 If you have any mild-to-moderate appreciation of the art of music (or just an Internet connection) you've probably cycled through Adele's new song several times by now. That's right, Adele just dropped the music video for "Hello" and it's been the perfect greeting from our long-missed chanteuse. Yet, no matter how absolutely wonderful the song is, we just can't stop wonder... why is Adele using a flip phone?

No, seriously. As emotionally wrapped up as I get with Adele's unanswered calls (I've been there, girl) the fact that she has a flip phone takes me out it. I mean, it just feels very uncomfortable because it's like... I don't know, 2015. In fact, up until this video the only person I knew that still had a flip phone was my 62-year-old dad. And even HE upgraded to an iPhone 5 in October, Adele, so I don't really know what your excuse is. Although... I guess I can always guess what the justifications would be for this.

Adele's new album 25 will be available November 20, so we have plenty of time to ponder the singers' technological choices. In fact, here are 11 possible reasons why Adele is using a flip phone.

1. The Older Phone Fits In With The Vintage Aesthetics Of The Video

I mean, Adele's whole vibe is solidly in the "retro-throwback" category, so it makes sense that in her sepia-toned video she would want her phone to match that old-timey feel. I mean, and then when she breaks out that landline, you guys, it's like I've stepped into a time warp.

Whoa, maybe the video for "Hello" is actually just a period piece.

4. She Still Has To Wait For An Upgrade

Adele is still on the family plan, and all the upgrades were already taken, so she still has a few more months before she can snag that sweet iPhone 6.

5. She Got An Upgrade AND An iPhone 6 But Then She Broke It

I mean, she did the whole shattered screen thing for a while, but honestly, it's damaged goods. So she re-activated her old phone and I guess we just have to wait it out the next 2 years.

6. She Got An Upgrade And An iPhone 6 But Then She Dropped It In The Toilet

She's just telling people that she broke it. Either way, girl, you really need either a lifeproof case or insurance, because this isn't acceptable.

I mean, if there's ONE thing I miss about them, it's that.

8. She's Saved This Phone As A Relic Of Her Old Relationship

It has historical significance, you guys. HISTORICAL SIGNIFICANCE.

9. Or It's The Only Phone That Still Has His Ex's Number

She was smart enough not to transfer his contact info into her new phone, but not smart enough to smash the old one and bury the pieces.

10. Or Maybe She Doesn't Want To Actually Be Tracked Down?

She just wants to be known as "45 new voicemails girl" but she doesn't know what she'd actually do if her ex called back, or, God forbid, picked up.

11. Or Maybe, Just Maybe, She Really Just Loves The Feel Of An Flip Phone In Her Hand

Switching to a smart phone is a personal choice every woman has to make for herself. She'll be ready when she's ready.

I guess the world will never know why Adele made this creative decision, but I think we can still agree that flip phone or not, "Hello" is a hell of a song.