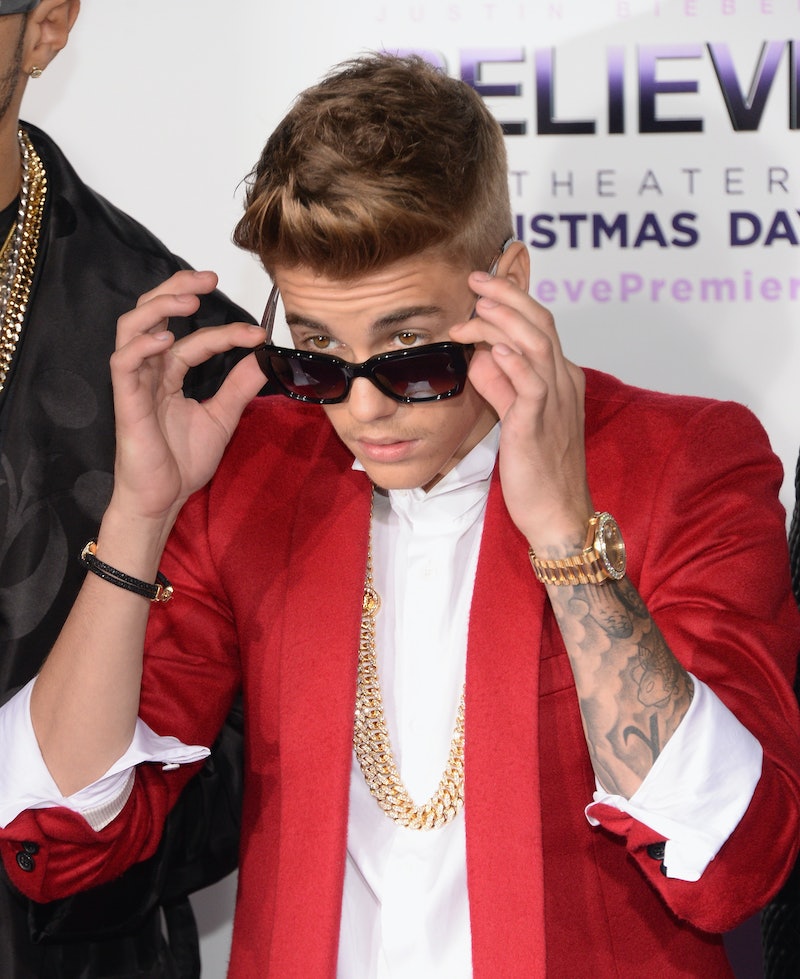 Welp, it happened: After peeing in a restaurant mop bucket, egging a neighbor's house, his good friend Lil' Za being arrested at his house for possession of drugs, leaving his monkey in Germany, trying to assault a paparazzo, and various other offenses of asshole behavior I can't be bothered to list off here, Justin Bieber finally got arrested early this morning in Miami on suspicion of DUI and drag racing. While it's not clear at the moment exactly what happened, according to local police, Bieber was pulled over around 4 a.m. in his yellow Lamborghini, and he proceeded to fail a field sobriety test, and was thus arrested. Now, though, it looks like we might have a little more information about what exactly went down in the moments leading up to his arrest — thanks to some of his fans who were following him around Miami in the early hours of the morning as it happened. Case-in-point: A fan managed to catch video footage of Justin Bieber being pulled over in Miami just before he was arrested, as well as shots of him driving pretty recklessly on the street beforehand.

Here's the video in full from the fan, samanthurx74's Instagram:

Try to ignore all of the unintelligible shrieking about "OH MY GOD IT'S JUSTIN" in the background, and focus on the yellow Lamborghini which can be seen ahead of the car. Justin seems to veer into the next lane rather strangely (though, to be fair, it could just be the angle the video is being shot in) before he ultimately gets pulled over as the fan's car passes by.

According to reports from the arrest scene, Bieber initially refused to be arrested when he didn't take his hands out of his pockets, and his friend, rapper Khalil Sharieff, was arrested as well. Apparently, Bieber had attempted to block off a residential street to create a "makeshift drag strip" to race on, but he was arrested before he could.

It's not clear if more fans who were trailing him caught video of the arrest. Bieber is currently being held at the Miami police department, where he will likely be booked and have his mugshot taken. Hopefully that visa he's in the country with holds up through this...