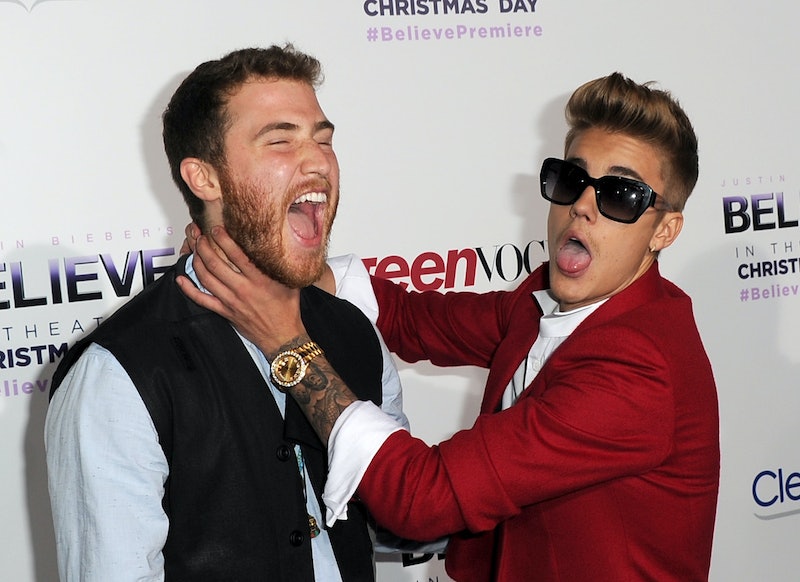 The Biebs finally did it — he partied too hard in the city where the heat is on. Justin Bieber was arrested in Miami Beach early Thursday morning for drag racing and a DUI, Miami Beach Police confirmed. The 19-year-old singer was in a rented yellow Lamborghini at the time. Sounds like he didn't act alone, though. According to the Sun-Sentinel, his friends used their cars to block traffic on a residential street to create a makeshift drag strip where Bieber was stopped. Bieber reportedly left a club on Lincoln Road in the Lamborghini before police pulled him over.

"He was pulled over [around 4 a.m.] and failed a field sobriety test," Miami Beach Police Sgt. Bobby Hernandez told the Sun-Sentinel.

A red Lamborghini was pulled over along with Bieber's, and the other driver, rapper Khalil, was also reportedly arrested. No injuries have been reported. According to TMZ, Bieber is currently in custody at the police department where his blood alcohol level is being tested. The outlet also says that Bieber resisted arrest when he refused to take his hands out of his pockets. Khalil posted a photo to his Instagram account around 3 a.m. of Justin and a female in the yellow luxury car with the caption, "U know bizzle brought that lambo out."

So what's his next stop? Likely Miami-Dade County's main jail to have his mugshot taken, and then he'll be booked and his bail will be set, says Hernandez.

Bieber's arrest is the cherry on top of a laundry list of antics that he's pulled recently. Almost two weeks ago, Bieber was investigated by police for egging his neighbors home, proudly peed in the snow in Colorado, and may be using sizzurp.

On Monday, Bieber visited King of Diamonds strip club in Miami to celebrate Lil Scrappy's birthday and reportedly spent $75,000 there. The singer has been skateboarding and graffiti-ing his way through the city all week, according to Bieber's Twitter. His mother, Pattie Mallette, also asked his fans to pray for him this week. What now, Beliebers?

You can watch Bieber's arrest below: