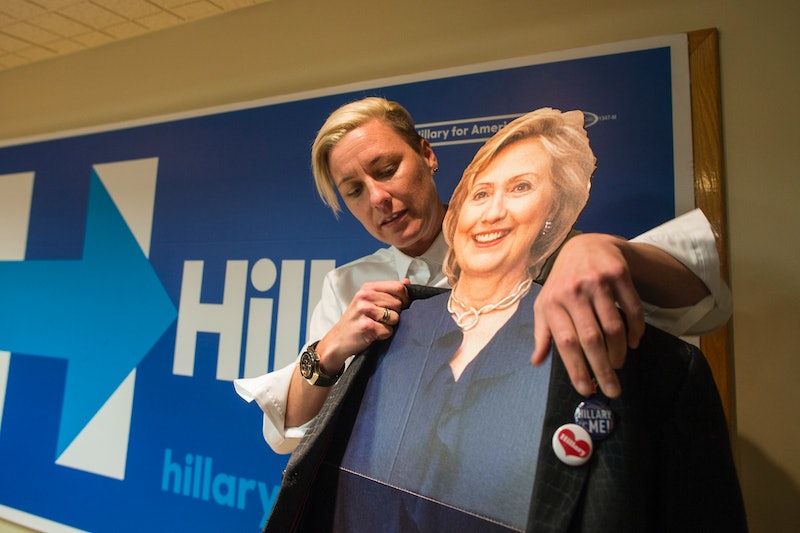 It's been a good week to be a feminist. Presidential candidates on the left appear to be placing a firmer focus on maternity leave, and some heavy-hitting feminist superstars are getting in on the 2017 campaign action. The best feminist quotes of the week highlight all the ways rad women are working for a better, more informed future along with allies across the board. On Friday, soccer superstar Abby Wambach headed to New Hampshire with Girls creator Lena Dunham to do a bit of campaigning for Democratic front-runner Hillary Clinton. Wambach has been as vocal in her support of Clinton as she has on the importance of representation in the highest office in the land.

Political ideals aside, Wambach had some powerful things to say about Clinton's political career, citing her as a clear role model for women and girls across the country. Wambach said:

I want to see Hillary Clinton in the office. She has amazing, amazing stamina. She's smart and she has been basically doing it by herself as a woman alone among all other men for how many years. It's time people. It's time for women to be seen as real equals.

The elite athlete was similarly inspiring in her appearance at a Women for Hillary event in Portsmouth. So, too, are the stars and politicians who have made this week truly a standout week for equality.

It's no surprise that Emma Watson takes her role as Goodwill Ambassador for UN Women incredibly seriously. Watson says she's learned a lot since taking the position, especially from feminist literature. The insightful books and essays she's been reading are what inspired Watson to start her own feminist book club. Inviting women across the world to join, Watson had this to say:

As part of my work with UN Women, I have started reading as many books and essays about equality as I can get my hands on. There is so much amazing stuff out there! Funny, inspiring, sad, thought-provoking, empowering! I’ve been discovering so much that, at times, I’ve felt like my head was about to explode… I decided to start a Feminist book club, as I want to share what I’m learning and hear your thoughts too.

Jennifer Lawrence graced the cover of Glamour magazine this week. The actress took us all to task on wage inequality in Hollywood and also took down the sexism permeating the movie industry. With typical bravado and colorful language, Lawrence made it clear that she certainly didn't have the patience for such discrimination. Her takedown of Hollywood sexism is both humorous and highlights the absurdity of doing things "even though she's a woman." Lawrence said:

As women we don’t know we’re at a deficit because we have vaginas. It wasn’t until they had a headline like, 'Even though she’s a woman!' And I was like, 'Oh. I didn’t know to be looking out for that... How did I do it, getting a period once a month?... I had to go to my red tent in the desert and wait it out.

Democratic presidential hopeful Bernie Sanders is setting his sights on providing paid family leave for all American workers. His support of the Family Act, a bill that would raise payroll taxes in an effort to provide necessary paid family leave, shows a firm commitment in offering more time for working parents to spend with their newborns without the threat of economic hardship. Sanders is incredibly passionate about the cause and considers it a matter of fairness and equality. During a press conference in Iowa earlier this week, Sanders had this to say about his fellow candidates on the right and just how little they're doing for mothers and fathers in the workforce. Sanders said:

I get a little bit tired of hearing my Republican colleagues talking about family values. They just love families but when a mom has a baby and is forced to go back to work after one or two weeks, apparently they don’t think that that is infringing on a family value.