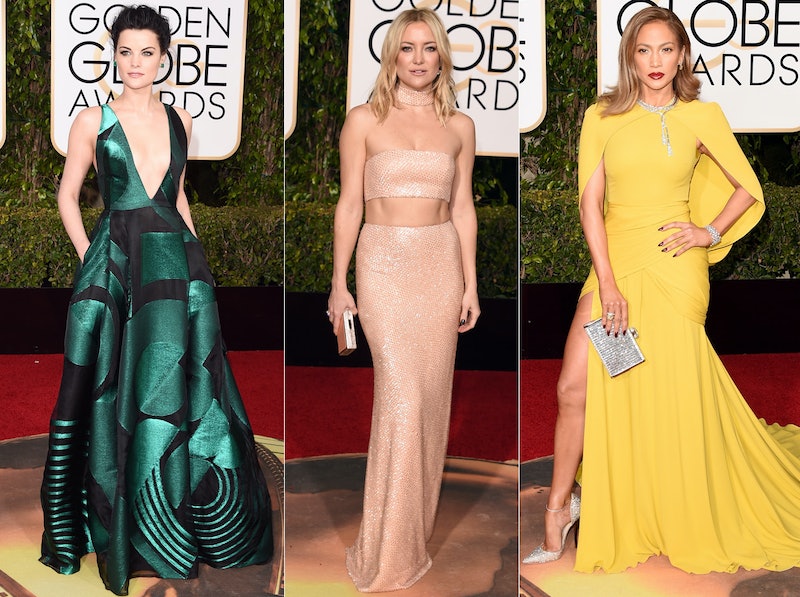 Second to (maybe) only the Oscars, the 2016 Golden Globes dresses are the most anticipated of the non-stop glitz and glam that is awards season. The Globes red carpet, after all, makes room for just about everyone in entertainment — from television to movies to everything in between. Even if you do rank the Academy Awards carpet as number one for fashion, you still have to appreciate an event that allows for both Amy Schumer and Jennifer Lawrence to be nominated and, just maybe, wear the same gown. A girl can dream.

Lawrence and Schumer weren't the only stars with potential to marvel at the 2016 Globes, though. With the always-the-most-stylish-in-the-room Cate Blanchett nominated for Best Actress in a Motion Picture Drama, Melissa McCarthy nominated for Best Actress in a Motion Picture Comedy or Musical, and Leonardo Dicaprio nominated for Best Actor in a Drama (I mean, is anyone really surprised by this anymore?), the 2016 Golden Globes red carpet promised to be flat-out magical on a hundred different levels. And between Jennifer Lopez, Laverne Cox, and the Game Of Thrones cast, it did not disappoint. Here are all the looks from the 2016 Golden Globes; prepare to have serious closet-envy.

Daisy Buchanan, is that you?

It's official. The '90s are back. Hudson's glam mermaid look was paired with Forevermark Diamonds, and she looked radiant in the ensemble.

Yeah, supermodels can walk the red carpet too, you know.

Winslet pretty much always looks stunning, and this year was no different.

Old Hollywood Gaga is the best Gaga in my book.

J Law proved the cut-out trend is here to stay.

*Goes out and buys an floor-length white gown ASAP*

Not totally sure about Channing's hair, but they're still the cutest couple around.

... or maybe they're the cutest couple.

Something about this look is so '90s — in the best way possible.

The red carpet wasn't all black and white, and Adams rocked this burst of color at the awards show.

Klum opted for a simple silhouette and OTT sparkle, which complemented each other perfectly.

The Game of Thrones star looked picture perfect in red.

OK, I'm a little obsessed with this one.

Do I smell a comeback for the peplum?

A touch of floral added a bit of glam to Longoria's look on the red carpet.

King was the first real splash of serious sparkle on the red carpet, and her look made a serious statement.

Sometimes a jewel tone is the best option of all, as the star of Downton Abbey proved on the red carpet.

Another navy gown from Bryce Dallas Howard paired with a little glitter and embellishment.

The red carpet hosts started the evening off on a high note with a crimson gown and dapper suit.

I mean, if you didn't already want to be her best friend, Taylor Schilling's super chill pre-red carpet routine will probably convince you.

A classic black gown is always a good idea.

There's never a wrong time to hop on the reflective sunnies trend.

This color palette and makeup combination is stunning.

Yes, even inanimate dolls take the red carpet these days.

Nude nails and a statement ring are always a good idea.

This slit may just put Angelina's famous gown to shame.

Menounos' braid was perfect for this white gown.

Accessorizing with a giant tablet/cell phone and some sneakers? How hip!

Gown number from Rancic two was a total stunner.

How fierce is this suit?