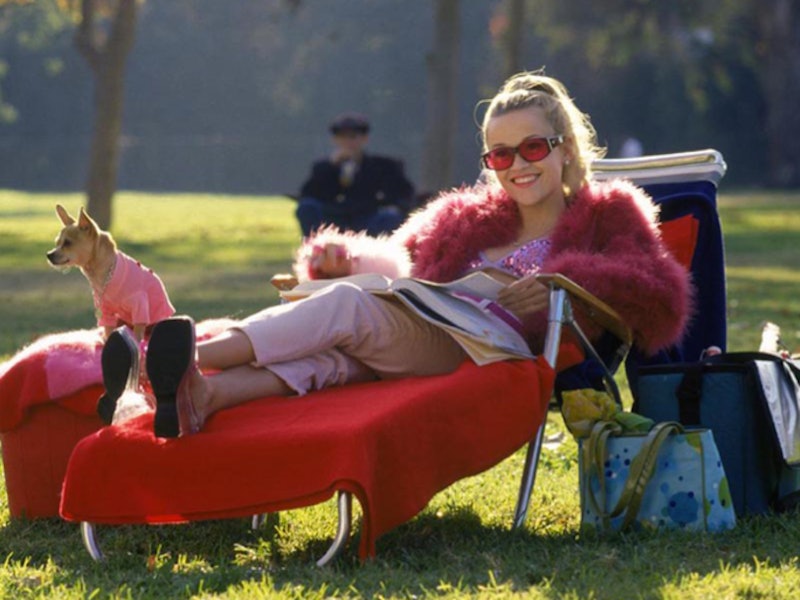 As perennial classic Legally Blonde heads into its 15th year of existence (can you believe 2001 was so long ago?!), Reese Witherspoon and Selma Blair posted an epic throwback on Friday of their time in the film (and the pic came with a hilarious photobomb from Oz Perkins, AKA the chronically-suspicious-looking Harvard Law student who "spent the past year deworming orphans in Somalia"). “Love this and you, @therealselmablair!!” Witherspoon wrote in her version, adding in the decidedly Elle Woods-esque caption, “Think Pink #Regram #FBF #LegallyBlonde."

It's great to see the duo reunited, and the photo makes my Legally Blonde nostalgia stronger than ever — especially when it's cause for hope that another movie is on the way. In an appearance on Fashionably Late with Rachel Zoe last year, Witherspoon teased the idea of a third Legally Blonde , telling the stylist, “I think we’re ready to see Elle and see what she’s up to lately. [...] A lot of writers over the years have come up with different ideas for it. I actually think it’s kind of great right now because we’re talking about women in politics and how important that is to get more women. And I think it’d be kind of a cool thing to have her be a Supreme Court justice or someone who runs for office... [or] President?” Unfortunately, when pressed for details, Witherspoon was quick to add, “Call MGM, I have no idea!”

So sadly, fans might not be getting another sequel anytime soon, but at least we have that reunion photo, right? And Witherspoon and Blair's #TBT isn't the only great on-set photo to thrill fans — here are 11 of the best behind-the-scenes posts from movies and TV.

Yep, it's true: Kimye first met in 2008 on the set of a pilot for a Comedy Central Star Wars parody that never aired.

OK, one more because how can you not with Shay's epic first day #FBF? It's even framed!

"Shooting at 2 am and this is where me and Gregg end up..." Gomez captioned the shot on Facebook.

Yes to everything about this. Also, check out the rest of Lalaine's behind-the-scenes shots from her Disney days.

From the famous "Rocky Horror Glee Show" episode, as dug up by Kevin McHale, who played Artie Abrams.

If you didn't catch this movie, you're not alone, but how cute is this photo?

The supermodel's stunning throwback from the set of the legendary fashion bible came compliments of an equally-legendary source: stylist Carlyne Cerf de Dudzeele, whom you might know from her friendship with Miley Cyrus.

The Modern Family star appeared as orphan Molly in the 1999 made-for-TV movie.

Major nostalgia happening. These photos are the best.