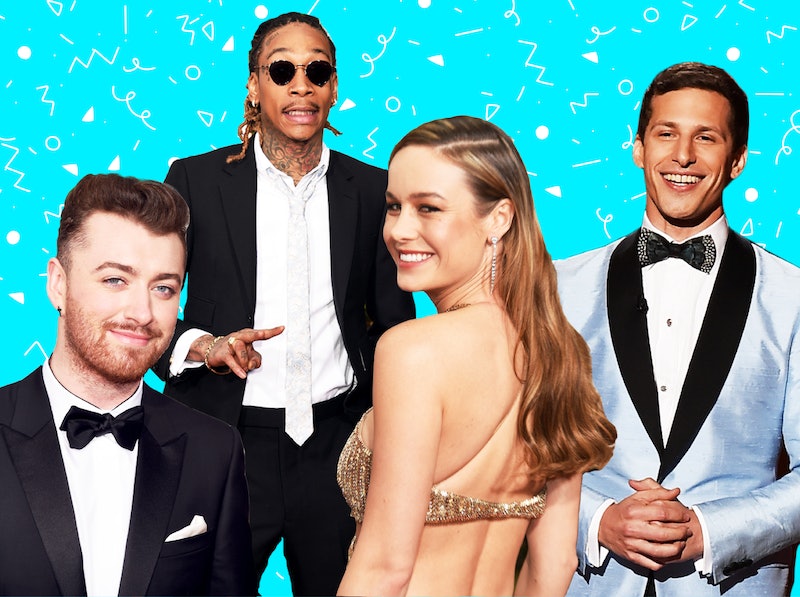 Glam looks aside, watching the giddy celebrities is the real joy of any red carpet. The Golden Globes are known — with good reason — as the fun awards show, and it shows in the silly interviews stars tend to give during the pre-awards festivities. From Sam Smith to Gina Rodriguez, the musicians and actors alike who will be honored at Sunday night's festivities dropped a few memorable lines that definitely deserve spots on any funniest quotes from the 2016 Golden Globes red carpet list. Even the non-comedians demonstrated a humorous streak on Sunday night, proving you don't have to be Andy Samberg to be hilarious. (Although, his interview was one of the best.)

The staple red carpet questions usually consist of things like a celebrity's reaction to attending the awards, who he or she is wearing, and who the stars are hoping to see over the course of the night. But, many celebs still manage to slip in a couple gems, showing off their humorous — or just intoxicated — sides with off-color, self-deprecating, hilarious remarks. Golden Globes host Ricky Gervais is going to have to put on a great show to compete with the funny performances of the red carpet celebs!

1. Red Carpet Host: "Have You All Had Any Champagne Yet?"

That's one way to start the night off!

When asked what it's like to attend the Golden Globes for the first time, Wiz Khalifa responded, "Crazy as heck, but I'm dealing with it. Yep..." Cue the awkward, but hilarious, pause seen in the video above.

4. "The Least Prepared I've Ever Been On A Stage, Including Elementary School Plays." — Andy Samberg On The Emmys

Hosting the Emmys apparently posed more of a challenge to Andy Samberg than one might think.

5. "She Was Like, You're Gonna Have The Best Time, You're Inside The TV ... So I Keep Sitting Here Thinking I'm Totally Inside The TV Right Now!" — Brie Larson

On her pep-talk from Emma Stone immediately before the show.

6. "We Have To Pay Someone Even Though We're Here." — Jason Sudeikis

Last year, Sudeikis's wife Olivia Wilde was pregnant — and now the baby is home with a sitter.

7. “My Vagina Itched And I Asked If I Could Address It And You Said No.” — Amy Schumer

Amy Schumer brought her sister to the awards, and it turns out her sibling’s got her back. But, Amy didn't quite take her advice...

This was said Upon hearing the red carpet was delayed. 20 seconds might not be enough for Amy, but I'm OK with that!

It hasn’t even started yet, Gervais.

This came on the heels of an explanation of how the 24-year-old Furious 7 singer gets carded when he goes out, and the skepticism of the bartenders at the Golden Globes when he assures them he really is 24. Hopefully a beard can solve that for him!

Ryan Seacrest: "Not Much."

There are worse ways to accept an award.

15. "We Tend To Make It Rain Whenever We Come Here." — Eddie Redmayne

Because, you know, it rains a lot in England.

16. "I don't know why that dress just reminded me, but it's a chilly night, so for a lot of the ladies, there are some challenges." — Matt Lauer

Well, since that comment came immediately after seeing Kirsten Dunst's daring, plunging neckline, I think we all know why that dress reminded Lauer of the chill. Stay classy, Lauer.