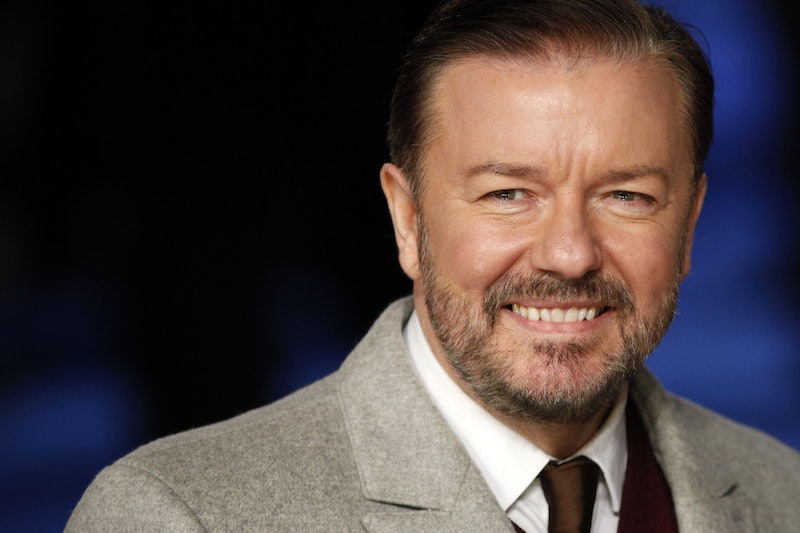 As soon as the cameras zoomed in, and Ricky Gervais' face filled the screen, I was already bracing myself for something. There's always something. And, of course, not even five minutes into his monologue, Gervais joked about Caitlyn Jenner and the trans community in quick succession. When are the comedians of Hollywood going to understand one simple fact? Caitlyn Jenner is not a joke. Her gender identity is not a joke, her transition is not a joke, and she should never be the punchline to any joke. At all. Ever. I mean, I wasn't expecting Gervais to be one of the comedians who understood this, but I certainly wasn't expecting him to prove that he didn't understand this so soon into the 2016 Golden Globes.

"I've changed," Gervais joked. "Not as much as Bruce Jenner, obviously." Cue the laughter, I guess? Because that's so funny? I'm not sure what the joke is supposed to be, exactly. "Now Caitlyn Jenner, of course. What a year she's had," he continued. "She became a role model for trans people everywhere, showing great bravery in breaking down barriers and destroying stereotypes. She didn't do a lot for women drivers, but you can't do everything." Oh, OK.

Even worse, Gervais did not stop there on his quest to offend everyone in the room. He also dug into Jeffrey Tambor, who is currently famed for starring as a transgender woman in the Amazon series Transparent, with an incredibly inappropriate tangent. "At least Jeffrey Tambor did it in a dress. What a year he's had. What an actor, what a role. Every day he has to put on all of the women's clothes and the hair and makeup and let people film it. That takes balls, so, I don't know how he does it. I really don't. I've seen his balls, they're huge and long..." Again, I'm not sure what the joke is supposed to be here. That men dressed as women are hilarious and brave? And why did that require an entire interlude about Tambor's genitals? It just doesn't make sense, and it isn't funny.

I understand the merits of shock comedy. I really do. The point is to make people laugh at how outrageous inappropriate a comedian can be. But there's a difference between outrageously inappropriate and offensively inappropriate, and that's a difference that Gervais has yet to learn over the course of his numerous times hosting the Golden Globes. Even worse, it's a difference that really matters when it comes to a marginalized group like the transgender community. Just as Caitlyn Jenner is not a joke, so too is the entire transgender community not a joke, nor a group to casually use as a punchline, especially not in an opening monologue for an awards ceremony watched by so many people. These kinds of jokes about a community so often misunderstood by, or suffering at the hands of, others just make me cringe, as if I can physically remove myself from the horror of having listened to the joke. Gervais can, and honestly has, done better and been funnier. I'd like to see more of that, and less attempts to make his insult comedy more heavy on the insult than it is on the comedy.