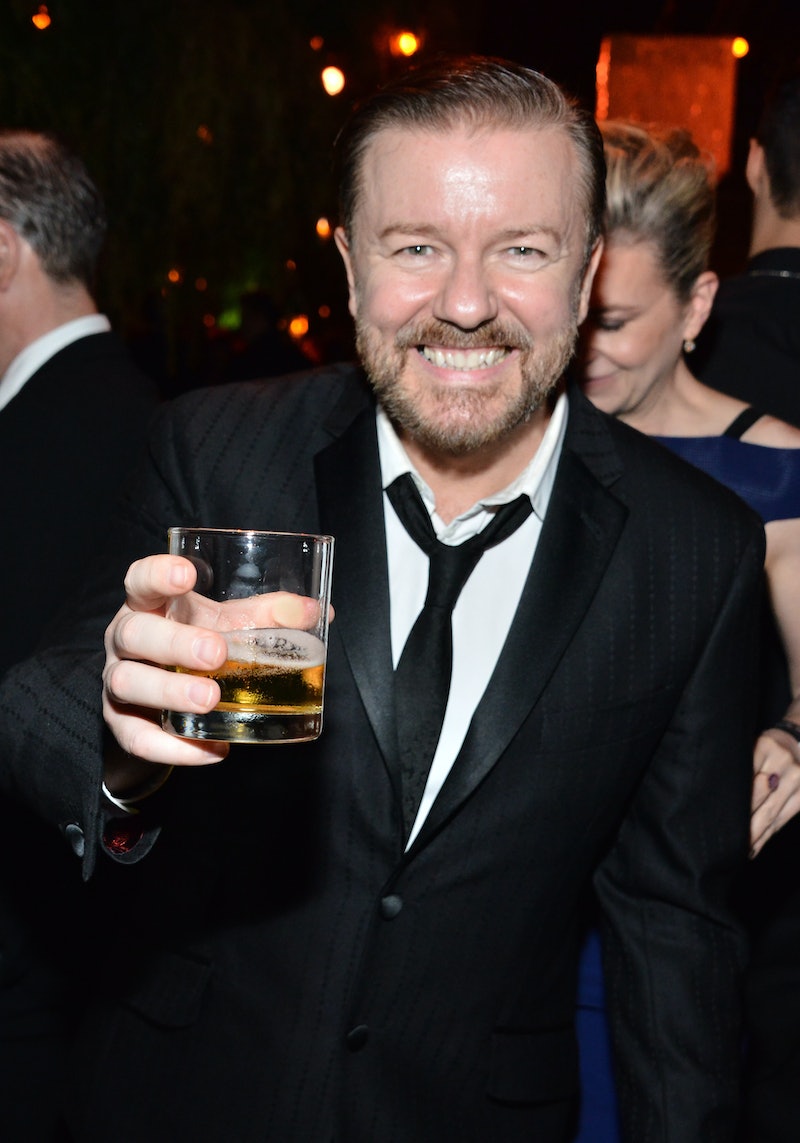 After the three-year hosting reign of Tina Fey and Amy Poehler (bow down), the Golden Globes chose a new host in 2016, which is actually an old one: Ricky Gervais. And, though change isn't always a bad things, I can't help but feel like this rather tired decision is a step backward. Both literally — Gervais has hosted four times before — and figuratively. Choosing Gervais to host in the year after the Academy Awards earned itself the hashtag #OscarsSoWhite for not nominating anyone of color in any of the acting categories and following a year where TV was its most diverse yet seems like a halt in progress. Or, a complete disregard for some of the complaints about Hollywood that got so much attention in 2015, specifically that they tend to ignore women and minorities. In other words, it seems tone deaf.

That wasn't always the case though. When Gervais first appeared as the show's host, he was an interesting choice. An English comedian with an aggressive, completely politically incorrect style that was unafraid to go after anyone. Just search "ricky gervais golden globes offensive" and you'll see what I mean.

In 2010, his first year hosting, Gervais had fun biting the hand that was feeding him, as The Daily News put it, by making jokes about NBC, who was airing the show, and the Hollywood Foreign Press. He made fun of himself. He would make people giggle, often uncomfortably, with jokes about Jay Leno stealing his job, Paul McCartney's hefty divorce settlement, and Angelina Jolie's multiple adoptions.

"Actors aren’t just loved here in Hollywood, they’re loved the world over, because they’re recognizable,” Gervais said. “You can be in the Third World, and you get a glimpse of a Hollywood star, and it makes you feel better. You can be a little child, a little Asian child, with no possessions, no money - but you see a picture of Angelina Jolie and you think, ‘Mummy!'"

But two years later, the Gervais that once seemed mischievous just came off as tired. Many thought his schtick had gotten old, since he seemed to stick with a few of the same touchstones: insulting lots of people in the audience, making everyone feel uncomfortable, sipping his drink and joking he wouldn't be back.

Before the 2012 show, Gervais himself said he was on his last hosting legs, telling the Associated Press, "I guarantee they will not invite me back." Perhaps it was a foreshadowing of what he had in-store. That night he seemed to try and go for the jugular with jokes about his tiny penis, the difference between Kim Kardashian and Kate Middleton, and insulting Johnny Depp as he stood right next to him.

With Fey and Poehler at the helm, the mean-spirited material was at a minimum, with the women choosing to poke fun at celebrities in a joke-y, light way. They poked fun at George Clooney's dating history, but it was all in good fun. That seemed to be the theme of their hosting tenure, to just have fun and wear funny costumes. Fun isn't always something that comes across in Gervais' comedy. He seems more interested in embarrassing the nominees and presenters, putting them in awkward situations where they either have to smile and move on or come up with a retort on the spot. This Johnny Depp moment, for instance:

Gervais has done things right in his time hosting. Some of his most offensive jokes are funny, but in 2016 his style of #sorrynotsorry humor just doesn't seem to cut the muster. Right now comedy is taking on larger topics like politics and social issues, but Gervais' comedy doesn't do much of that. Instead, it goes after people he doesn't really like. And there's very little chance he's going to change his ways all of a sudden in his fourth time hosting.

And why would he change his style? Gervais is back for ratings. Love him or hate him, Gervais doesn't really care what you think. That's an attitude that's great for social engagement and live viewing. According to Deadline, Gervais' ratings were up as Golden Globes host: "Over the 2010-12 span, the Globes hosted by Gervais averaged a 5.2 rating in the 18-49 demo and 17 million viewers overall, which was a 6 percent increase from the 2009 telecast in the demo and 14 percent or 2.1 million persons in total viewers."

Gervais is already teasing fans that he's ready to make people uncomfortable, saying that the Hollywood Foreign Press has given him free reign, "They said I can say what I want again,” he told Ellen DeGeneres in an interview on The Ellen Show. He has said he will definitely be drinking and has already apologized for what he's going to say.

This is why it seems the Globes missed their opportunity to set the show in a new direction. There are tons of new talented comedians that could have been a fresh new voice for the awards show.

Trevor Noah isn't Jon Stewart, but his world-spanning comedy could have added some diversity to the show. Not to mention lots of jokes about how he doesn't get America's politics or entertainment choices. With his Netflix series Master Of None , Aziz Ansari addresses Hollywood's diversity problem — it makes you wonder what he could do with his monologue. Following in the steps of Fey and Poehler, they could have gone really out there and signed Broad City stars Abbi Jacobson and Ilana Glazer up to help get things weird, as well as, perhaps, openly address the fact that the Golden Globes snubbed Broad City again. Or, just get Will Ferrell and Kristen Wiig to recreate that 2013 presenters speech for three hours.

With so many exciting options out there that better represent the time we're in now, going with Gervais again just seems like a lazy choice. Comedy has moved beyond insult humor and when it comes to choosing a host, the Golden Globes should too.