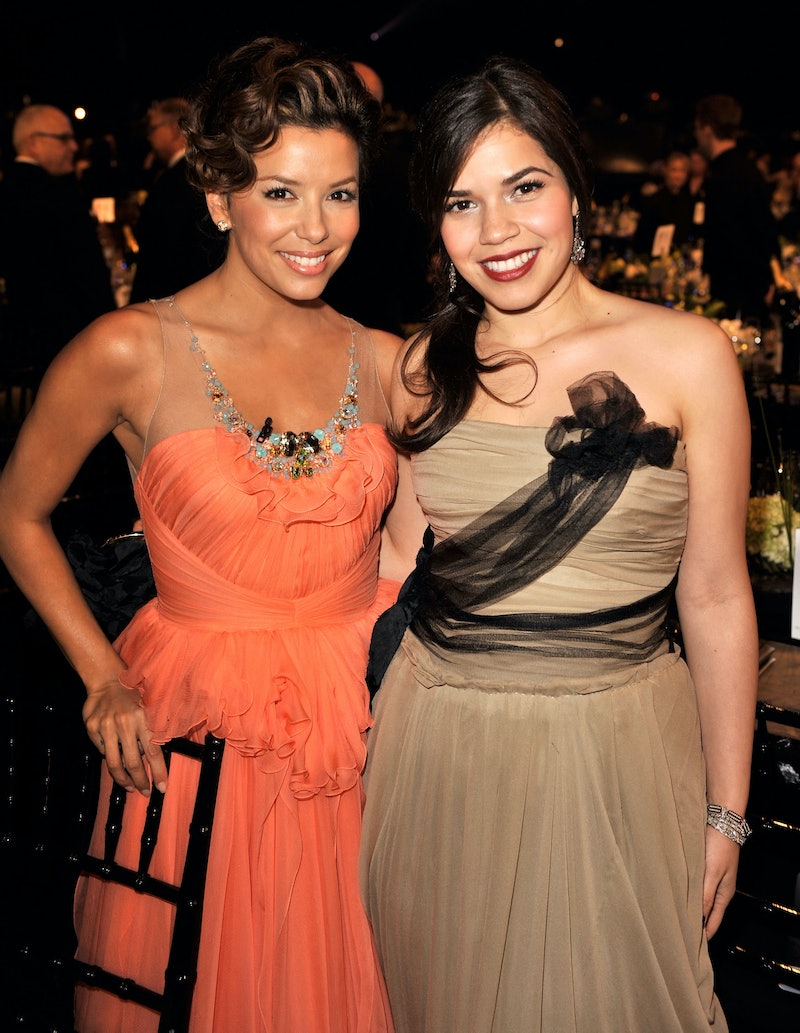 Eva Longoria and America Ferrara should seriously consider hosting the 2017 Golden Globes, because in one perfect moment they basically won the night as far as I'm concerned. Ferrara and Longoria joked about the Golden Globes mix-up, in which the Golden Globes Twitter account mistook Ferrara for Gina Rodriguez as she announced the list of 2016 nominees in early December. The joke made up the entire beginning of their monologue leading up to the announcement of the category they were on stage to present, and I can't remember what else they said after that because I was laughing so hard. Ferrara joked about being Rodriguez, Longoria joked about being Eva Mendes, and, in that moment, I wondered why they weren't just always on the stage at all times.

Longoria got the ball rolling with the announcement, "I'm Eva Longoria, not Eva Mendes," to which Ferrara replied, "Hi, I'm America Ferrera not Gina Rodriguez." Then Longoria kept the joke going by announcing, "And neither of us are Rosario Dawson." You know, for those of us in the audience who were super confused. Or, rather, those of us on Twitter who were super confused. Just when you thought they were finished, they continued on with a "Well said, Salma" and "Thank you, Charo" that basically had me dying of laughter.

This humorous exchange was amazing for two different reasons. First, Longoria and Ferrara had such great comedic chemistry together that I literally just want them to star in a bunch of movies and host a bunch of shows together, like the next Tina Fey and Amy Poehler. Second, the fact that the Golden Globes have recovered enough from the snafu to allow Ferrara to joke about it is wonderful, as it shows an awareness of their mistakes and a willingness to laugh at themselves that's actually really cool. It's a small moment, but it was one of the best moments of the entire night.