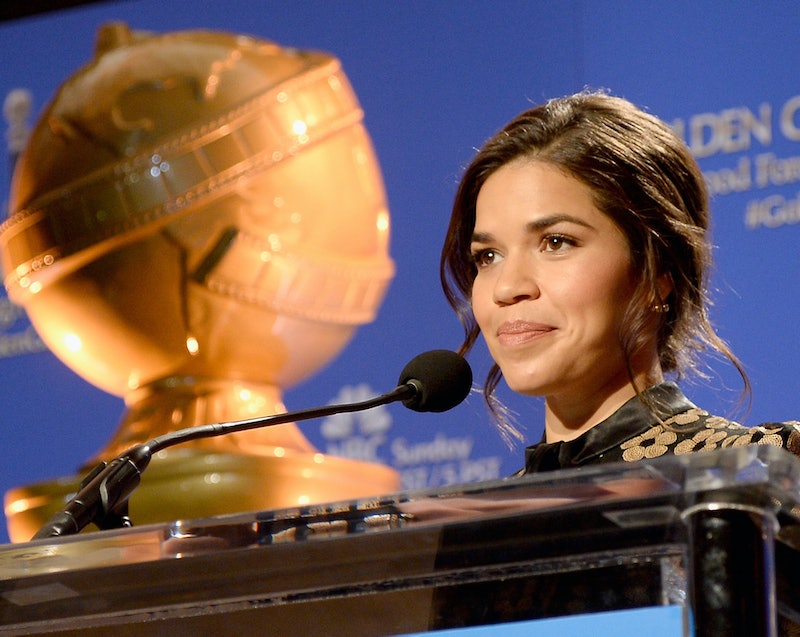 Clearly, whoever was running the Golden Globes social media account early Thursday morning needed another cup of coffee. While live-tweeting the 2016 Golden Globe nominations, the official Twitter account for the Golden Globes posted a photo where America Ferrera was mistaken for Gina Rodriguez. Also, more than one tweet was shared using Rodriguez's Twitter handle, rather than Ferrera's. The tweets were deleted, along with new tweets being shared with Ferrera's correct Twitter handle. Bustle has reached out to the Golden Globe Awards for comment, but did not immediately receive a response at the time of request. Update: Bustle received the following official statement from the HFPA: "What occurred this morning was an unfortunate error. Our sincerest apologies to both America and Gina."

As you can imagine, the Internet was not happy after the Superstore and Jane the Virgin actresses were confused for one another. It's kind of crazy to think that there would ever be a case of mistaken identity for these two prominent stars who have influenced the entertainment industry, especially when it comes to breaking barriers as Latina women in Hollywood. Granted, sometimes accidents happen, and I'm sure whoever sent the tweet probably is embarrassed and feels really bad — or at least I hope so. I mean, I wouldn't want to be known as the person who confused Ferrera and Rodriguez.

Here are some tweets from Twitter users who weren't afraid to point out the major error:

And here are the new tweets the Golden Globes tweeted:

At least the major mistake was corrected, but let's hope it doesn't happen again.