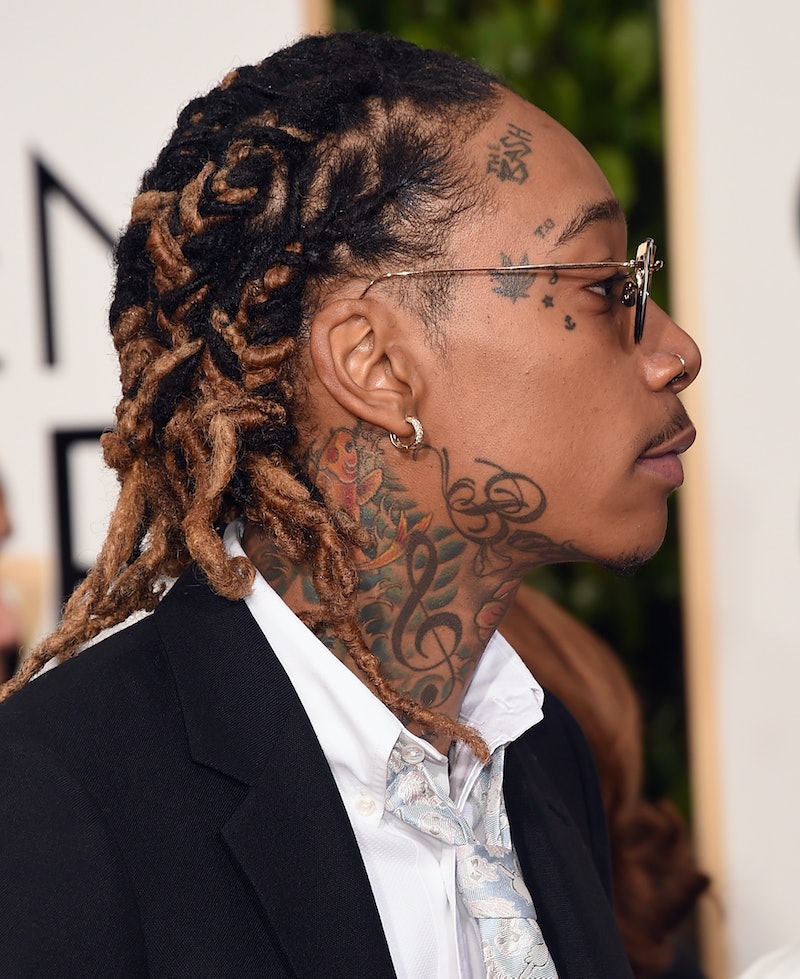 On the red carpet Sunday night, just before his song "See You Again" from Furious 7 went up against the likes of Sam Smith, Ellie Goulding, and Brian Wilson for Best Original Song, Wiz Khalifa noted in an interview that this was his first Globes. How was it going? "Crazy as heck, but I'm dealing with it. Yep..." And then he paused. We have to wonder how he's dealing now that Wiz Khalifa's "See You Again" was snubbed for the Golden Globe. This was the rapper's first nomination and an unexpected hit out of the burn-em-up summer action flick. The song also features Charlie Puth, the 24-year-old YouTuber-turned-producer, and it was composed to honor late Fast & Furious star Paul Walker, who died in a car crash midway through filming Furious 7.

It's not surprising that Sam Smith's Spectre track, "Writing's on the Wall" won the award — music from James Bond films have been nominated for almost every award there is, and Adele won the Oscar for Best Original Song for Skyfall. Then there's Ellie Goulding, the "Love Me Like You Do" songwriter who is behind the theme for 50 Shades of Grey (that still plays consistently on the radio). But Khalifa's win also would have been a coup among the homogeneity of the awards Sunday night. For example, Straight Outta Compton notoriously failed to receive any nominations despite its strong box office and popular showing. So a win for the rapper, for a film genre that's traditionally not a serious contender come awards season, would have been surprising.

Still, in terms of musical merit alone, "See You Again" was most definitely snubbed. The track is available to stream below. Listen for yourself to get an idea of what the Hollywood Foreign Press Agency missed out on.

More like this
Anya Taylor-Joy Might Be Engaged To Her Musician Beau
By Jack Irvin and Sophie McEvoy
Photos Of The 'Elvis' Cast vs. Their IRL Counterparts Will Have You All Shook Up
By Grace Wehniainen
Taylor Swift's “Carolina” Theme For 'Where The Crawdads Sing' Soundtrack Is Here
By Jake Viswanath
What Is Elvis Presley’s Net Worth? How The King Earned & Spent His Fortune
By Grace Wehniainen
Get Even More From Bustle — Sign Up For The Newsletter