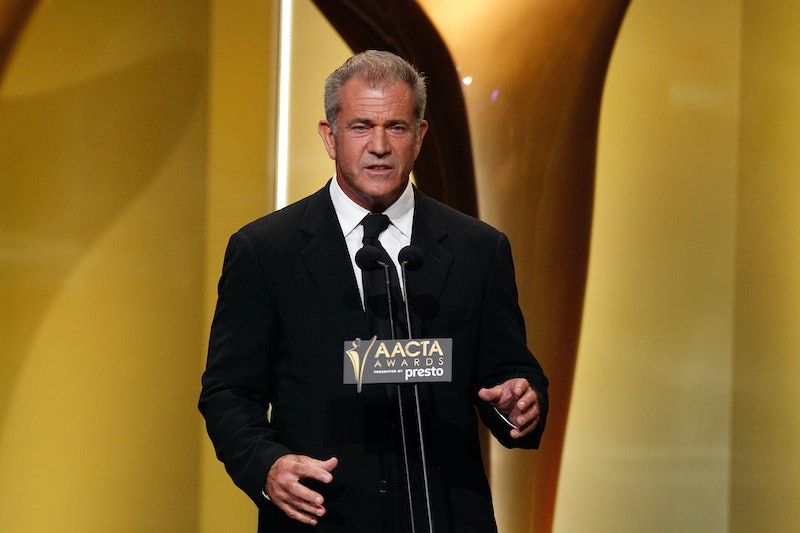 If you were still trying to deal with some of the jokes that Ricky Gervais opened the Golden Globes with, then it might have been something of an overload to see Gervais and Mel Gibson on stage at the same time. It was like a collection of the world's least favorite people. But whether you dislike Gervais, dislike Gibson, or dislike them both — or, hey, maybe you're fans of both, I don't know your life — then I know I'm not alone in wondering what Ricky Gervais asked Mel Gibson at the 2016 Golden Globes. For those of you watching at home, the entire question that Gervais leaned in close to ask Gibson was bleeped out by the broadcast — and for good reason. As you'll soon discover, it was incredibly lewd and inappropriate. But, I mean, this is Ricky Gervais we're talking about.

As it turns out, Gervais asked Gibson, "What the f*ck does sugar t*ts even mean?" The question referred to Gibson's 2006 DUI arrest, during which Gibson was reported as asking a female police officer, "What do you think you're looking at, sugar tits?" It was just one small part of a very colorful rant that made all of the papers and online media outlets at the time, but it was certainly one of the more memorable parts, as evidenced by the fact that, 10 years later, Gervais is still curious about what exactly that insult means.

To be honest, now that he's brought it up, I myself am curious, but... not curious enough to ask Mel Gibson about it.