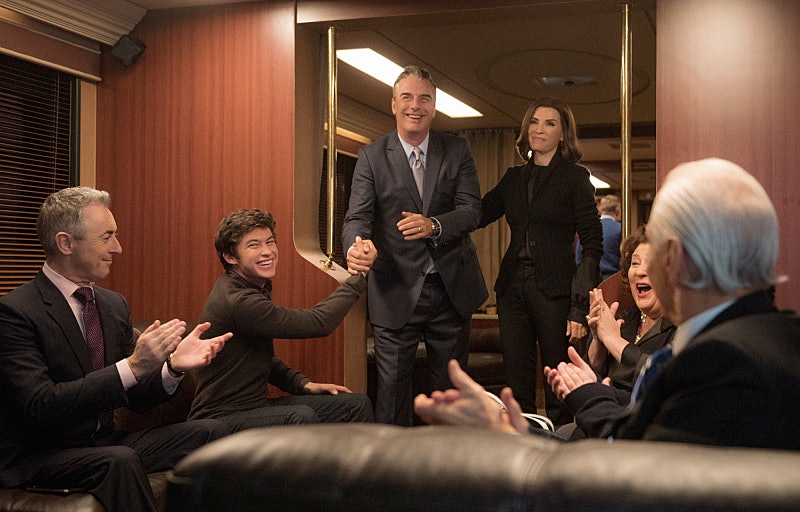 Peter is officially out of the Presidential run on The Good Wife. Yes, Peter's ill-fated Presidential run ended on Sunday's brand new episode of The Good Wife, "Iowa." The episode saw the entire Florrick family — Zach and Grace included — take to Iowa for the Iowa Caucus. Though Peter began the race just hoping to be in the running for Vice President, as his poll numbers increased, so did his belief that he could, actually, be President of the United States. Unfortunately, no matter how many districts he visited in Iowa, or how involved Alicia became in the campaign, he still lost. With Peter out of the race on The Good Wife , his future with Alicia is even more unclear.

Alicia spent the entire episode being angry at Eli Gold for deleting grieving over the life she could have had with Will Gardner, but even she managed to throw herself into Peter's Iowa campaign, rallying voters at a local caucus and encouraging staff. And just when she finally seemed ready to fully commit herself to the campaign, it was over. The sudden end to Peter's campaign coupled with her newfound drama with Eli could spell trouble for the Florricks moving forward.

If Peter is no longer running for President, then his political career could allow him to get a divorce. Peter and Alicia have been dancing around the nature of their marriage for years. And, yes, he is still Governor, and she is still a public figure — both have careers that could be damaged by the public spectacle of a divorce. However, this might be the push Alicia needs to finally be on her own.