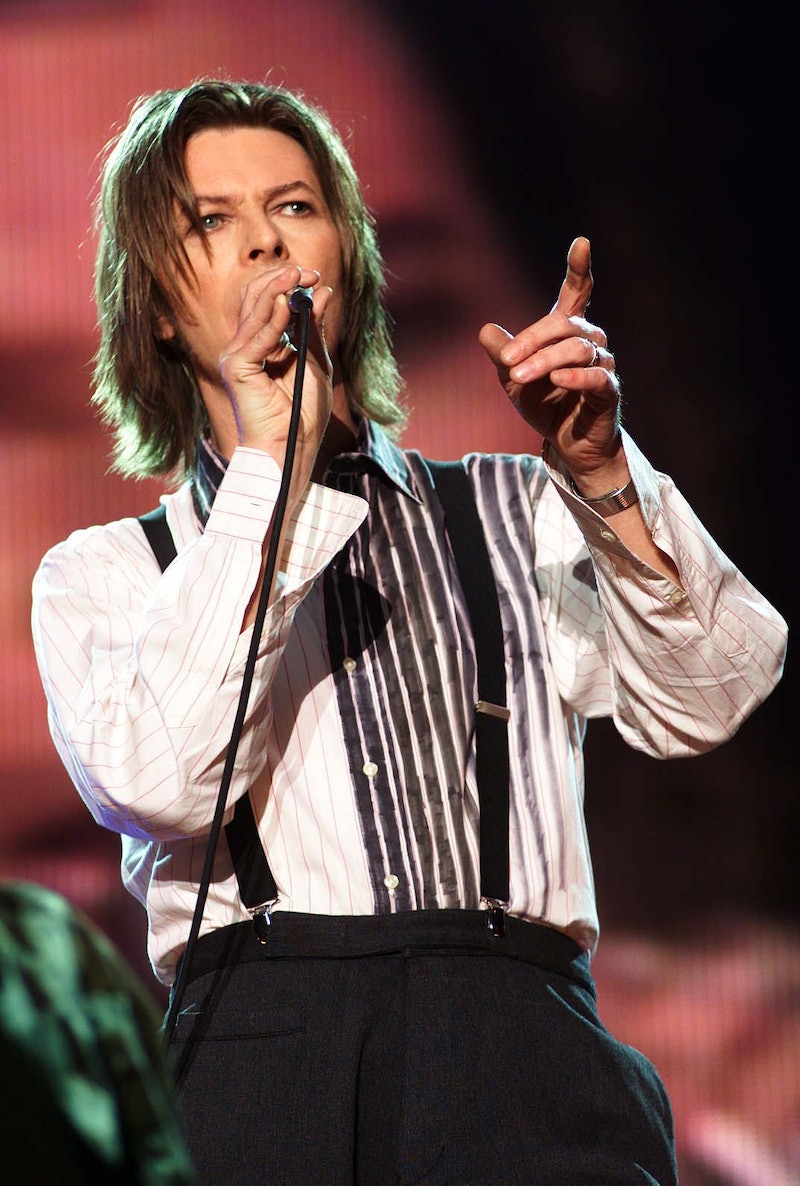 Early Monday morning, the world was shocked to hear that David Bowie had died at 69 years old. A message shared by his family on his Facebook page reads, "January 10 2016 - David Bowie died peacefully today surrounded by his family after a courageous 18 month battle with cancer. While many of you will share in this loss, we ask that you respect the family’s privacy during their time of grief." It's said about a lot of rock stars, but Bowie really seemed like someone who would live forever. Part of it was the fact that he'd gone through so many reinventions, but more than that was the fact that he was always active, always working. And perhaps nothing shows that more than the fact that Bowie released his 25th studio album, Blackstar , on Jan. 8, 2016: his 69th birthday and only two days before his death.

At a time like this, it's natural to want to look for answers, in this case, what Bowie's condition was and what his mindset was like before he passed away. Of course, themes of life and death aren't uncommon in music and that goes for Bowie's, as well. ( Rolling Stone wrote in 1972 of what would become one of his most famous songs "Changes" that it was perhaps a "young man's attempt to reckon how he'll react when it's his time to be on the maligned side of the generation schism.") That said, the seven-track album Blackstar does have a lot of references to death throughout that come out in plays on religion and unanswered questions about the end of life. In fact, Tony Visconti, who produced the album and was a longtime collaborator with Bowie called it a "parting gift." Visconti wrote on Facebook following his friend's death:

He always did what he wanted to do. And he wanted to do it his way and he wanted to do it the best way. His death was no different from his life - a work of Art. He made Blackstar for us, his parting gift. I knew for a year this was the way it would be. I wasn't, however, prepared for it. He was an extraordinary man, full of love and life. He will always be with us. For now, it is appropriate to cry.

Something happened on the day he diedSpirit rose a meter and stepped asideSomebody else took his place, and bravely cried

Look up here, I'm in heaven

I've got scars that can't be seenI've got drama, can't be stolenEverybody knows me now

From "Girl Loves Me"

Where the f*ck did Monday go?

From "I Can't Give Everything Away"

I know something is very wrongThe pulse returns the prodigal sonsThe blackout hearts, the flowered newsWith skull designs upon my shoes

It's impossible to know exactly how much of Blackstar's lyrics Bowie meant as a goodbye, and looking at them in light of his death it's hard not to take his words a certain way. Still, he did always keep people guessing and this is just one more way he's continuing to make us do just that.