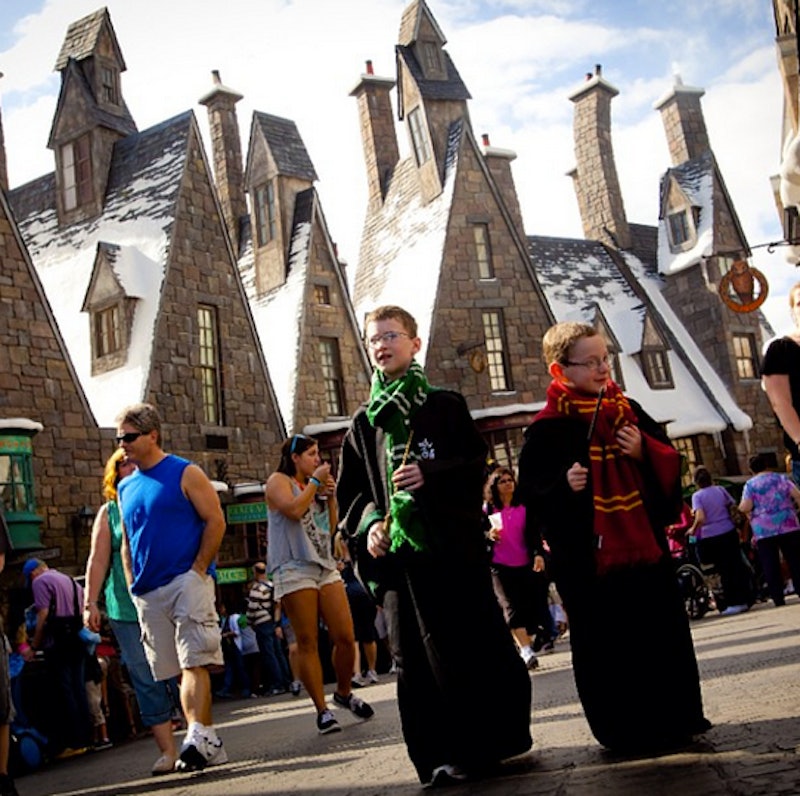 Most Harry Potter fans would probably sell their souls to Voldemort in exchange for experiencing their favorite moments from the series. RIding the Hogwarts Express, drinking a butterbeer at the Leaky Cauldron, picking out a wand at Ollivanders. Get ready, because in just a few months you'll be able to do all of those things and it won't cost your soul, just $128 and a plane ticket. You may have heard of, or already visited, the Wizarding World of Harry Potter at Universal's Islands of Adventure, but, in a live webcast Thursday morning, Universal revealed the Wizarding World of Harry Potter would expand.

The studio's plans are amazing — but a little tricky. The current Wizarding World is supposed to depict Hogsmeade, the village where third-year-and-up Hogwarts students take weekend trips. The theme park has three rides and some shops from the series, including Ollivander's, Honeydukes, and the Three Broomsticks.

In Thursday's webcast, Universal Orlando representatives joined Harry Potter cast members Evanna Lynch, Matthew Lewis, and James Phelps to give a preview of the planned Wizarding World of Harry Potter — Diagon Alley. What is Diagon Alley? Harry's first real exposure to the wizarding world, where wizards and witches do their shopping and evil blonde men slip possessed books to children.

Diagon Alley will include the Leaky Cauldron, a larger Ollivander's (since that's where the store really is), Weasley's WIzard Wheezes and a few more shops, but who cares because Weasley's Wizard Wheezes is going to exist. Here's an official artist's rendering of the planned shop.

That alone is worth the admission, but there will also be additional rides, including Escape from Gringotts, the details of which are being kept a secret for now, except for its description as a "multi-sensory, multi-dimensional journey" and these renderings.

Oh, and there's more. Besides Diagon Alley, there will be Knockturn Alley, the shopping center for dark wizards. As for the rest, there's good news and bad news. Bad news first: the Wizarding World of Harry Potter — Diagon Alley will be in the Universal Studios park, while the original Wizarding World is in its Islands of Adventure park. That means you'll have to spend more money on a two-park ticket to see all of the Harry Potter attractions.

The good news? It's will be completely worth it, because the Hogwarts Express will connect the two, with Diagon Alley containing King's Cross Station.

Right now the Wizarding World of Harry Potter — Diagon Alley is set to open in the summer of 2014. So Potterheads, you only have a few months to wait. Get those Galleons ready.

More like this
Rupert Grint Just Shared A *Major* Update About Ron Weasley’s Future
By El Hunt
Netflix Shut Down 'Bridgerton' S3 Rumours About A “Very Dark” Storyline
By Bustle
Bill & Frank’s 'The Last Of Us' Episode Has Twitter Emotionally Wrecked
By Alyssa Lapid
Jessica Simpson On The Time She Was Pursued By A Backstreet Boy & An *NSYNC Member
By The Editors
Get Even More From Bustle — Sign Up For The Newsletter
From hair trends to relationship advice, our daily newsletter has everything you need to sound like a person who’s on TikTok, even if you aren’t.