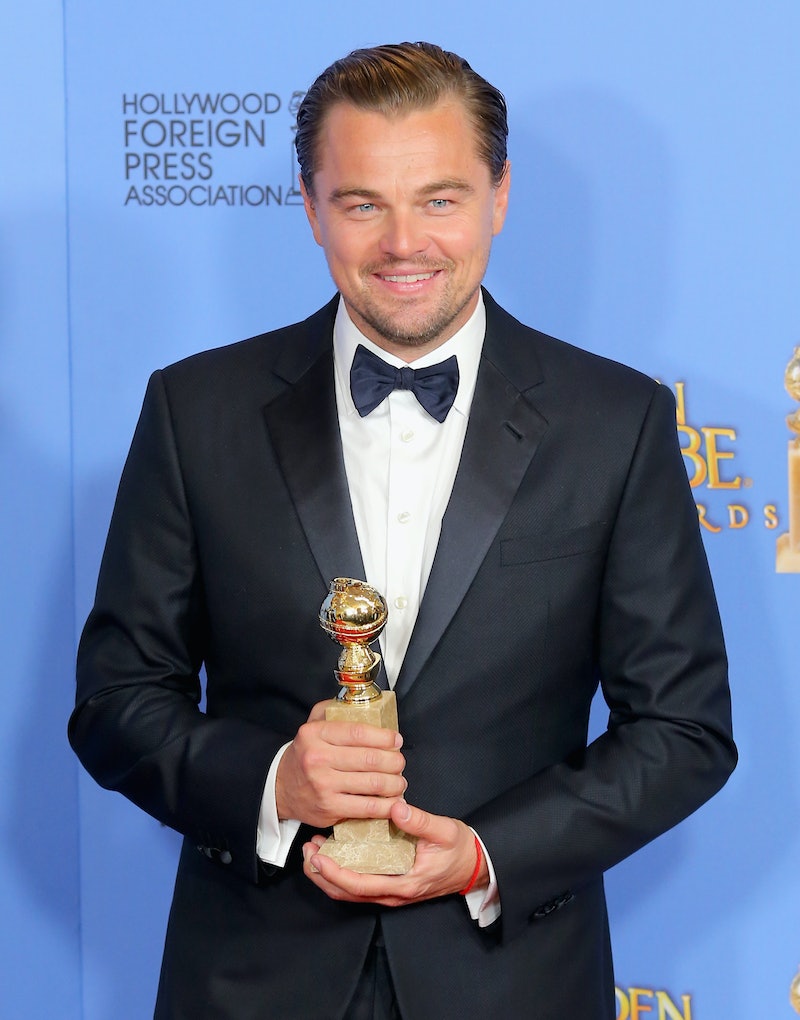 He may be one of the most well-respected actors in Hollywood, but there's one thing Leonardo DiCaprio and I have in common: neither of us have won an Academy Award. I know, savage to bring it up, but it's awards season so someone needed to say it. It has been an ongoing joke that Leonardo DiCaprio has never won an Oscar, but I'd like to think that they only joke about it because it's surprising, not because it hasn't been well-deserved. Although, the joke could come to an end in 2016 if DiCaprio wins the Academy Award for his work in The Revenant . Update: DiCaprio won Best Actor at the 88th Academy Awards. He now has one Oscar under his belt.

Earlier: Although Oscar nominations haven't been announced, it is highly anticipated that DiCaprio will be nominated by the Academy for his role in the Golden Globe winning motion picture, The Revenant. This wouldn't be the first time DiCaprio was nominated for an Oscar. In 1994, DiCaprio was nominated in the Best Supporting Actor category for What's Eating Gilbert Grape, and for Best Actor in 2005, 2007, and 2014 for The Aviator, Blood Diamond, and The Wolf of Wall Street, respectively.

At the Golden Globes, DiCaprio took home the award for Best Actor in a Motion Picture Drama for The Revenant. Although the Golden Globes are not a fool-proof way of predicting who will win the Oscars, they often foreshadow what is to come on Oscar night. While we'll have to wait until the envelope is opened and the winner is announced, this could be his year. DiCaprio's win at the Golden Globes was much deserved. He received critical acclaim for the role as Hugh Glass, Christopher Orr for The Atlantic commented that "DiCaprio’s commitment to the role is beyond dispute."

Over the years, DiCaprio has worked on huge Hollywood hits. For example, The Wolf of Wall Street garnered a handful of Oscar nominations in 2014 but didn't win anything. Perhaps The Revenant is the perfect performance to finally take home the honor. The actor claims to Wired that this was one of the most difficult films he's ever worked on. While I am sure that DiCaprio is proud of all of the work he's done in the past (shoutout to Growing Pains), I would assume that winning an Oscar for his portrayal of Glass would be extremely meaningful.

Then again, I really hate to see the running joke end. Leonardo DiCaprio never winning an Oscar is something that fans and entertainment junkies like myself hold near and dear to our hearts. Sure, he's worthy of winning all the Oscars, but he's not struggling too much without one, is he? I'm not ready to lose the relevance of these GIFs.