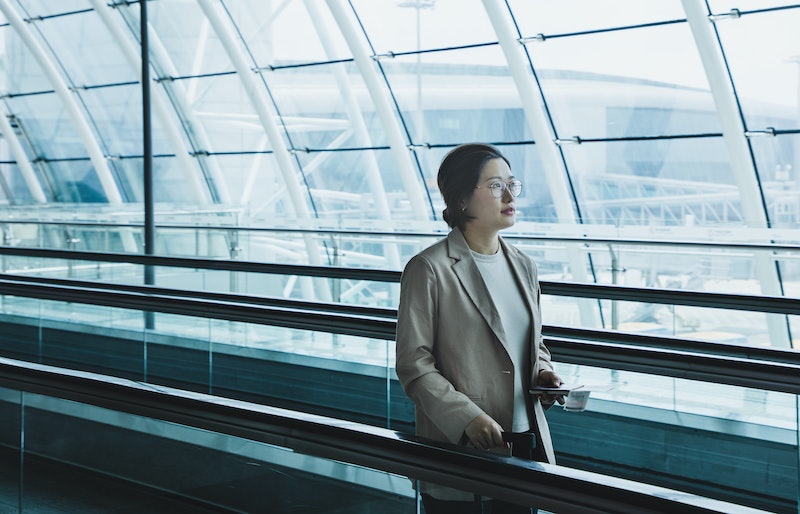 And just like Ansari, Khan and Kaling, I want to create content about my own experience that other people like me can relate to — other young people who are also immigrants. Because that's what I wish I had growing up. I learned English from watching Friends — and while Friends is great, it's also a show where no one ever had to deal with not knowing how to say "can I go to the bathroom" in English. I loved it, but it wasn't my story.

Every time I meet someone else who was born outside of the US and immigrated here, I feel like we have a common vocabulary. They often know exactly why certain things are important to me. In my experience, immigrants get each other — which is why, if you're also an immigrant, you might also relate to some of the 15 points below.

1. You've Probably Lived With A Grandparent

Unlike all of my American-born friends, I always lived with my grandmothers. In fact, I shared a bedroom with one of them until I was 13 years old. The number of times my grandmother walked in on me playing make-believe spy games and somehow didn't think I was crazy, were...let's just say that it was a lot of times. And Grandmother, you were a real MVP for dealing with that during your golden years.

2. Sleepovers Are A Huge Deal

The concept of letting your kid spend the night at a strangers home was not one my parents got on board with quickly. And why should they? Back in Russia, it wasn't really a thing you did. Why would you go to a friends home, when your own house has a bed? The only reason you would sleepover was if something in your house was wrong. It took me a while to convince my parents that in America, sleepovers were common and decent — and not something you only did if your house got flooded.

No matter what. This makes sense — your family is the only thing that may remain consistent through a major continental move. You might change your address, your language and your attire, but in your core, you will always share blood.

Here's a sampling of the things I heard growing up: Your education is important. Your education is the only thing that can raise you to the same level as an American-born person. Education is valued above all else. You might not have been born in the same country as everyone else, but dammit, you will be just as smart as them.

If this feels like a lot of pressure, congratulations! You are finally getting what it's like to be an immigrant.

5. The Pressure To Live The American Dream Is Huge

First generation Americans spend a lot of time talking about the pressures of the American dream. Listen, I get you boo. It sucks. And I'm here to say, immigrants have a similar experience — with some added burdens, too.

Immigrant children have to not only keep that ball in the air, but simultaneously learn a new language and customs, and assimilate into society—because you are an immigrant yourself. You're supposed to be better off than your parents, even though you got to this place at the same time. It's a LOT of pressure.

6. Your Parents Are Not Happy To Hear That You Want To Be An Artist

Now, after reading and absorbing the previous point, imagine telling your parents (who just got your ass out of an oppressive country, so that you can grow up to able to be free and successful) that you want to be an artist. You now officially understand me. I feel this giant weight on my shoulders to make something of myself, and at the same time, a desire to pursue my passion because in America, I can do that.

7. Your Baby Pictures Look Like They Are A Century Old

I was born in the '90s, but you wouldn't be able to tell that from the picture above. That's because photos were taken in black and white during my childhood in Russia, because colored film was too expensive.

8. Your Taste In Music Is Different From Many Of Your Peers

With the exception of Queen B, all my other choices of music were 100% questionable. From what I've gathered, my immigrant friends are all in agreement.

9. You Probably Had To Deal With Bullying

We've been bullied — whether it was for some of the things I mentioned above, or just because you cannot speak the language. I was lucky that for my first year in the U.S., I didn't understand I was being bullied, because I didn't speak English. It sure cleared up later, though...

10. You Are Wildly Patriotic

You are way too patriotic. Your entire family is way too patriotic. In the weirdest ways! There are maybe three American flags on my property at any given time. We celebrate every American holiday with fervor and commitment, as if someone is going to bust down our door and ask us to leave if we don't. I guess when it was so hard to get into the party, we are going to make the best of it now that we've finally been let inside.

11. You May Be Way Ahead Of Your Peers In Some School Subjects

Some of us find that when we move to America, we're way ahead of the game in some subjects. Sure, I had a hard time with reading comprehension, but I knew percentages in first grade. Math was easy as apple pie for me, my friends.

12. There's Always A Language Barrier Of Some Sort

At first, you may have trouble with English, but as time goes on, you will start having trouble with your native tongue instead.

13. The Olympics Are Basically Your Personal Dante's Inferno

Choosing a country to support is impossible. Do I go with America because I live here? Or Russia, because I was born there? Or Israel, because I'm Jewish? No. I just sit quietly and enjoy sports, because if I make any kind of choice, my family is going to have a long discussion about it.

14. Your Family Thinks You Should Be Married Already

The expectation that you should be married and have a family of your own by now grows exponentially when you are an immigrant. In my experience, being an immigrant woman means that your biological clock is dependent on whatever your mother tells you. But don't worry, you have all the time in the world — until your folks start setting you up with people your family is friends with, that is.

It's true. Your experience is both as old as time and totally unique. You were part of the same process that this country was based on. Enjoy that, revel in it and be proud. You will never forget your roots, but you are also tasked with planting new ones.