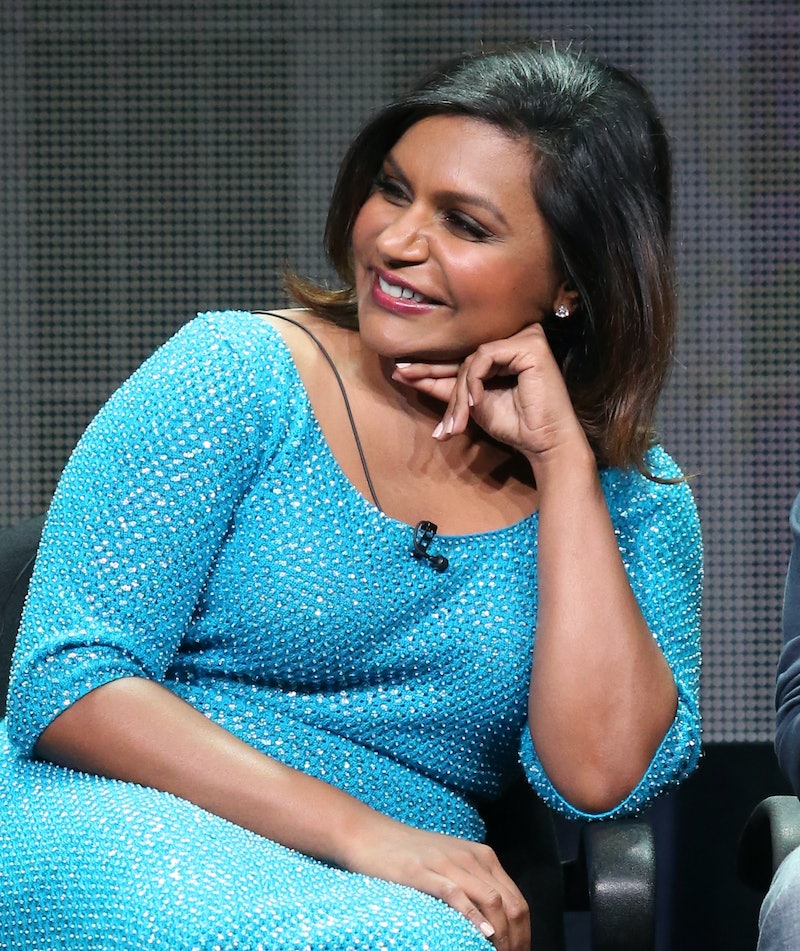 She met President Obama and FLOTUS, her show The Mindy Project just premiered on Hulu, and somehow in between all this craziness, Mindy Kaling’s new book Why Not Me? was written, printed, and released. It’s full of funny, sharp essays about friendship, hard work, spray tans, and dating. You know, the important stuff.

Kaling’s 2012 memoir Is Everyone Hanging Out Without Me? (And Other Concerns) looked back at her childhood, her early career, and her rise to fame as a writer, producer, director, and actor on The Office. The new book covers similar ground (career, dating, the absurdities of being a famous woman in Hollywood) but still manages to feel fresh. Plus, Kaling is such a talented writer, she could probably turn out sixteen essays about body image and they would all seem hysterical and unique, with the occasional observation that makes you grab a pen, underline a sentence, and think to yourself, “She totally gets it.”

After her first book came out, Kaling started saving stories and essays that she couldn’t fit into her show for a follow up book. Why Not Me? is dedicated to Kaling’s mom, who passed away after her battle with pancreatic cancer, and her influence on Kaling is apparent throughout the book. Look out for a lesson Kaling’s mom taught her about getting trophies. It’s a good one.

Why Not Me? belongs in what Kaling calls the “Stress-Free Summer Reads!” section, but that’s not to say the book is all fluff. This is a highly intelligent woman we’re dealing with. She’s well read and she gets spray tans. Big deal! So in honor of the book’s release, here is some of the best advice and some of the most feminist moments from Why Not Me?

One thing’s for sure: Kaling is not Gwyneth Paltrow. Instead of nibbling on chia seed pudding or cooking gourmet organic, gluten-free meals in her custom-made, eco-friendly kitchen, she’s eating McDonald’s and doing tequila shots in her car. Kaling never pretends to be perfect, which is refreshing in a world where Kim Kardashian’s book Selfish is a bestseller. “Every kid wants approval but my desire to be well liked was central to my personality,” Kaling writes at the start of the book. She wanted to be liked. And she owns it. Who cares what the haters say?

Beauty Advice Can Be… Unconventional

Kaling could write an entire book skewering Hollywood beauty standards. In the chapter “How To Look Spectacular: A Starlet’s Confessions,” she asks the reader what beauty icon inspires them: Audrey Hepburn? Halle Berry? “Mine is Nosferatu,” Kaling writes. “Because that vampire taught me my number-one and number-two favorite beauty tricks of all time: avoid the sun at all costs and always try to appear shrouded in shadow.” After she shares her unconventional beauty tips, she admits that, “Talking about looks isn’t important. It’s just supposed to be fun.” Maybe her third book should just be Mindy Kaling’s Beauty Secrets.

Being a Bridesmaid Blows

It might be surprising to learn that Mindy Kaling, lover of sappy romantic comedies, really, really dislikes weddings. She also knows that being a bridesmaid blows. Here’s her take on it: “You even have to wear a uniform: a dress in the same color as the other maids so everyone at the party knows whom to ask when someone is looking for a fridge in which to put their breastmilk.” I’ve never been asked to shelve someone’s breastmilk, but I get it. Also, she understands this double standard: “This is particularly outrageous because the groomsmen do absolutely nothing.” Seriously! Freaking patriarchy.

Sorority Life Isn’t For Everyone

Kaling went to Dartmouth, and she decided to join a sorority for a very deep and important reason: access to parties. The sorority sisters thought of Kaling as the funny one, but pretty soon her improv troupe became more important than pretend girl bonding with her Sigma Delta sisters. “So much of college is girls labeling other girls terrible things when they don’t like their behavior, but using concerned language so they have plausible deniability if they get accused of being bitches,” she writes of her sorority experience. “I thought I would like an environment of all women… But it took me 12 weeks to realize that I don’t really like organizations where people are ‘deemed’ things.” So she chose improv.

Don’t Call Her a BFF

Kaling writes that she and her college best friend always made fun of terms like BFF and girl crush. “To us, they signified the infantilization of women, and we were way too sophisticated for that. We had lived in Brooklyn new Jonathan Safran Foer!” It’s true actually. A grown woman using the term BFF is a little babyish. Do Tina Fey and Amy Poehler call each other BFF on the phone? What about Ruth Bader Ginsburg and her BFF, I mean, dearest friend? Doubt it. But then she moved to L.A. and met a stylish BFF named Greta who changed her mind about the term.

On that note, Kaling understands that whether you call them a BFF or not, female friendships are intense, important, and, sometimes, heartbreaking. “…There are not many relationships more powerful than that of two women who fall fast and deep into a friendship. It was heartbreaking to be loved and left.” She’s writing about her ex-BFF Greta, FYI.

Master The Art Of The Shoe Change

Sex Scenes Are (Not) The Worst

Kaling has some words for all those celebs that claim that sex scenes are so awful and torturous to do: “I am here to tell you that they are lying.” She loves sex scenes: You get to make out with hot actors all day long and no one feels guilty! So what if there are 30 crewmembers watching you? You’re still making out with hotties. As she so eloquently writes, "Sex scenes are the tits. You're welcome."

Kaling writes about the year she had to wake up at like three in the morning to announcing the Emmy nominations. Right before the announcements started, the president of the Academy walked up and basically told her that her show wasn’t nominated. Then she had to smile for the cameras and appear relaxed when really she kind of wanted to cry. But instead of having a meltdown, she decided to focus on appreciating all she’d accomplished, rather than freak out and bite her lip and bawl about not getting any Emmy love. “I would like to think this experience helped me kick off a lifetime of grace and the ability to express happiness for people who are doing well when I am not.” So, basically — keep it together, people. And appreciate what’s good.

Now hear this: “I want a guy who is a feminist, someone who knows that all that means is that men and women are equal. A man who admires strong women, like Hillary Clinton or Ruth Bader Ginsburg. But not that really accomplished woman from his office who seems cool and put-together. I don’t mean her.” Instead of the mysterious, artistic hottie who calls all women babes, we should be going after the feminist who champions The Notorious R.B.G.

Love Your Body… As Much As You Can

Kaling writes that she loves it when young women walk up to her and tell her how much they appreciate the way she looks (this is not an invitation to mob her in the street, though). “They like that I am not a skinny twig,” she says. What people don’t know is that, as she says, “I’m a big fat fraud.” She’s done juice cleanses and worked with a personal trainer. She’s not always totally at peace with how she looks, but “I want to be as body-positive as girls hope that I am.” That’s real.

One of the biggest takeaways from Why not Me? (besides the fact that Kaling is hilarious) is that she truly values hard work. “I don’t understand how you could have self-confidence if you don’t do the work,” she writes. She thinks the term “workaholic” should be a compliment, and can’t understand anyone who expects great things to happen without working their ass off. “Because confidence is like respect; you have to earn it.”

Check out Mindy Kaling’s Why Not Me? if you’re in the mood for a funny, breezy, feminist read with some solid beauty tips. Not all of us can afford to have a spray tan professional come to our house and hose us down in the shower, but with a little hard work, we can try…

More like this
Chelsea Clinton On The Best Advice She Ever Got From Her Mom
By Brianna Kovan
Just Because You're Cheap Doesn't Mean Your Clothes Can't Look Expensive — These Chic Pieces Are Proof
By Maria Sabella
If You Don't Like Tight-Fitting Clothes, You'll Love These Cheap, Stylish Pieces That Fit Away From Your Body
By Claire Epting
I'm A Shopping Editor & I Love These Cheap Clothes On Amazon That Look So Freaking Good On Everyone
By Allison Bolt
Get Even More From Bustle — Sign Up For The Newsletter