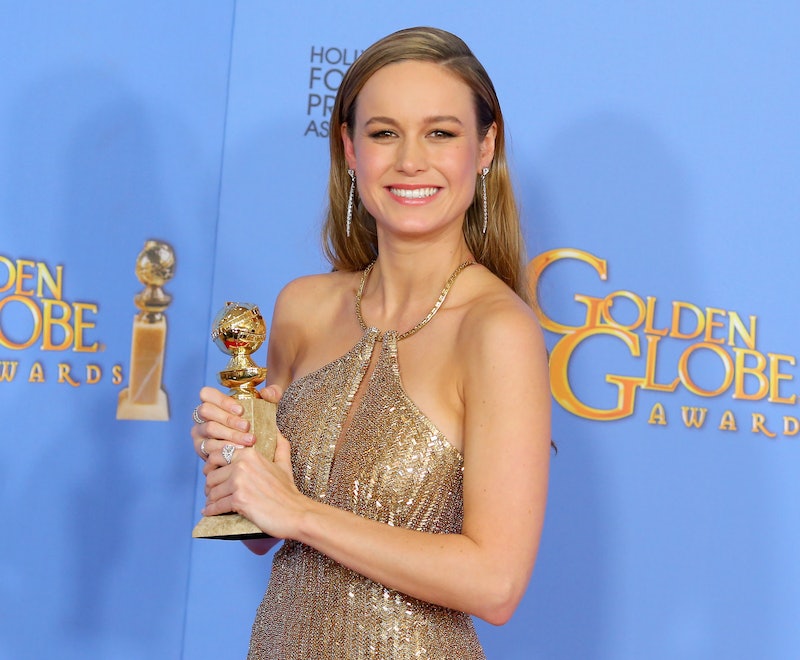 It might seem like it came up quickly, but award show season is already in full swing. Last weekend, it was the Golden Globes, and now, it's finally time for the 2016 Oscar nominations. And speaking of the Golden Globes, if the winners are any indication of how the Oscars are going to go, there are a lot of people who are going to be happy come Feb. 22, and I've suspected that one of them is going to be Brie Larson. She snagged her first Golden Globe for Best Performance by an Actress in a Motion Picture, Drama for Room on Sunday night, so it wouldn't be surprising at all if if the Oscars yielded her similar results. On Thursday morning, Brie Larson was nominated for an Oscar.

Room has been generating Oscar buzz since its release last fall. It tells the story of a woman who was kidnapped as a teenager and later impregnated by him and left to raise her child while still trapped. Both the film and Larson's performance were so powerful that it seemed like a shoo-in come award show time, so there are plenty of people who aren't surprised that she got nominated. In fact, the movie received several other nominations, including in the Adapted Screenplay and Directing category, plus the big one, Best Picture. Not too shabby!

There's a good chance this could be her second win this year, but she's definitely in good company. Also nominated in that category are Cate Blanchett, Jennifer Lawrence, Saiorse Ronan, and Charlotte Rampling — all deserving ladies who have put on phenomenal performances this year. It's tough competition, but if she could beat out Cate Blanchett at the Golden Globes, Larson is certainly capable of adding to her growing award collection on Oscar night.

I'm looking forward to finding out how things go next month. But in the meantime? Congrats to all the nominees!