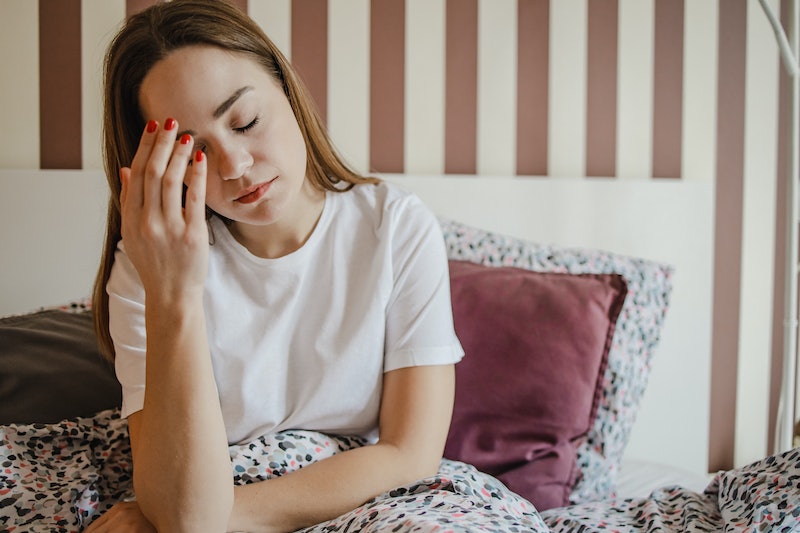 Unspoken issues between partners or unenthusiastic casual hookups can often lead to feelings of confusion and depression after sex. But what if you feel agitated, annoyed, angry, or sad even after pleasurable, consensual sex with a good sexual partner? This is a type of depression known as post-coital dysphoria, or PCD, and the Journal of Sexual Medicine recently released a study claiming that more women suffer from the disorder — "a condition that causes feelings of melancholy, agitation, tearfulness, anxiety, or aggression right after sex" — than previously thought.

The researchers surveyed more than 230 women, finding that 46 percent of them reported having felt depressed immediately following sex. Of this 46 percent, five percent of the women reported having experienced PCD multiple times in the past month. 20 percent said they'd survived sexual abuse; still, many claimed they did not suffer from PTSD, so there needed to be another explanation for their depression post-sex. In comparison, a previous 2011 study on post-coital dysphoria only found "32.9 percent of women surveyed reported feeling post-coital depression symptoms, and almost 10 percent reported feelings of 'distress and depression following consensual sex.'" So what is it like to feel depressed after sex?

The emotional affects of post-coital dysphoria are different from the more comprehensible feelings of anxiety and sadness that can sometimes show up alongside one night stands or casual hookups. I say "comprehensible" only because it can be easier for one to attribute these depressive moods to feelings of emptiness, loneliness, and dissatisfaction, or to desires for deeper emotional connections with a sexual partner.

With post-coital dysphoria, you can have a very fulfilling relationship or pleasurable sexual experience, but become suddenly overwhelmed by melancholy or anger once sex ends, unable to point to an obvious "cause" for these emotions.

There has also been research, led by the Queensland University of Technology, which found that intimacy (or lack thereof) between sexual partners was irrelevant to whether a person experienced post-coital dysphoria.

However, as addressed by Sophie Saint Thomas on Mic, there are a few issues regarding the methodology used within the study published in the Journal of Sexual Medicine. Most of the survey respondents were straight women, and the researchers gathered their data through an online poll. Additionally, the article brought up some concerns about the study of post-coital dysphoria in general. For one, the fact that studies on PCD seem to only ever focus on women can be interpreted as a means of pathologizing women's emotions and playing into the stereotypes that women cannot enjoy sex as much as men do. One 22-year-old woman who has dealt with PCD told Mic, "I've experienced [sadness after sex] before. But I don't think that it needs to be pathologized as a problem experienced predominantly by women. I've had and heard of partners of both sexes and a variety of genders who have felt melancholic after sex."

Logan Levkoff, a sex and relationships expert, also spoke to Mic, expressing concerns that these studies ignore a potential cause of PCD — specifically, the stigmatizing way that our society views female sexuality. Levkoff said, "I think it's important to remember that if you grow up not feeling empowered by your body, if you feel guilt and shame about sex, if you've been taught that your needs are less important than a man's needs ... [it's not a] surprise that some people wouldn't feel great after sex." Levkoff also pointed to the fact that many heterosexual women may feel unsatisfied after a sexual encounter, which is related to the fact that female sexuality and pleasure isn't openly discussed in our culture, and is even considered nonexistent by some.

With that being said, we shouldn't act as though PCD isn't a real problem either. Women already constantly deal with the medical community not taking their medical concerns seriously or claiming their symptoms are made up. The medical research community — responsible for developing the treatment, cures, and awareness of various conditions — "historically... [has] preferred male-only test animal populations, in part to avoid the complicated hormonal fluctuations and reproductive cycles of female lab animals (and, by association, the human women on the receiving end of medical treatment informed by these tests)." As a result, doctors are more familiar with methods to treat and diagnose various ailments in male-bodied individuals, despite women being twice as likely to suffer from depression, a panic disorder, and/or generalized anxiety disorder. Additionally, as you will hear from some of the women below, trauma from sexual assault and abuse (PTSD) affects their post-coital mental health as well.

There are also biological factors to consider. The research within The Journal of Sexual Medicine expressed the theory that "hormonal shifts which occur after an orgasm, which can also trigger post-coital headaches, could be to blame," as summarized by The Independent. However, relating back to Levkoff's point, men and women both experience orgasms and subsequent emotional reactions to orgasms, so why are these studies always gendered?

I spoke to 15 women about what depression after sex feels like for them:

It happens from time to time. It depends on the partner and a mood. I feel sad, disappointed, wasted, very emotional.

I feel depressed after sex every once in awhile, although it used to be all the time. I've been sexually assaulted, so I would often get triggered during sex and become emotionally distraught. However, sometimes I would just feel an overwhelming need to cry at the end of sex, even if I hadn't been triggered during it. I'm not sure how or why the latter happens. It's certainly tearful, and I feel just incredibly lost in the swarming dark thoughts in my head. I'm often mad too, but mostly at myself for reacting to consensual sex in such a way.

It's very rare when I do. Usually I feel well after it, but there are a few times when I pretend I'm OK, but when I'm falling asleep, I'm overcome with this sadness. It definitely depends on foreplay; if it's just a random sexual encounter and there is no at least pretend courtship, I get depressed (sans drunk sex). It feels guilty. I think it has to do with the religious influence in my heritage. I'm semi religious. I think I'm more spiritual than religious, but still, in the Latino culture, sex is still a stigma (despite how common out-of-wedlock pregnancies are).

I feel this probably 50 percent of the time. Anger is part of it but mostly I feel unmotivated, for lack of a better word. Let's say the sex occurs on a Saturday night. Sunday, I wake up late wanting absolutely nothing to do with the outside world and resort to lounging around and being kind of antisocial and irritable. In general, I'm the kind of girl who acts out sexually when I'm stressed out, or more specifically, feeling bad about myself. The actual act and the moments following always help, but obviously the distraction doesn't last long. I can also say it usually occurs when the sex is with a partner who is not the boy I want to be with.

I often feel depressed after sex. I'm a sexual trauma survivor and it's hard for me to stay present. When I dissociate, I can end up feeling used somehow, since I wasn't present for the sex. And since I'm also often physically numb because of the trauma, that can make sex not pleasurable, which makes it hard for me to enjoy. I often feel empty and sad afterwards as a result. I usually feel empty and I cry. Sometimes I'm mad at my partner.

It definitely depends on other factors, especially stress and anxiety, but it happens about 1/3 of the time. Sometimes, it's when everything is perfect, and that's when it's the worst. It's overwhelming; it happens in an instant — one moment, I'm enjoying myself, and the next, the flood gates are open. It feels a little like a panic attack, accompanied by tears and a weird feeling of regret.

It happens most of the time. I get very irritable. I also have insomnia afterwards and usually only sleep 2-3 hours that night.

It depends on my partner and whether I was slightly pressured into having sex. I feel agitated, annoyed, worthless. i don't fully trust my partner. This might be a reason.

Before my current partner (loving monogamous relationship), I had three partners that made me feel depressed afterwards — almost every time. I feel empty, guilty, and dirty.

It depends on stress and my partner. It happens maybe 10 percent of the time at most. I feel extremely melancholy and tearful. It usually happens if I'm fighting with my partner.

It's not so much anymore, but usually when I feel stressed [in general]. It can also depend on how your partner treats you. I'm mostly angry. And I did have some crying spells.

I found with my ex-husband it happened quite frequently. With my current partner, it almost never happens. I feel just incredibly sad, like I did something wrong.

It happens sometimes. Mostly when I know my partner has to leave and I know I will be left alone after sex (if he's in a hurry etc.). I know I would be less depressed if we didn't have sex just before he had to leave. About half an hour together [afterwards], and then I'm fine with whatever. It's mostly melancholy and I kinda feel cold.