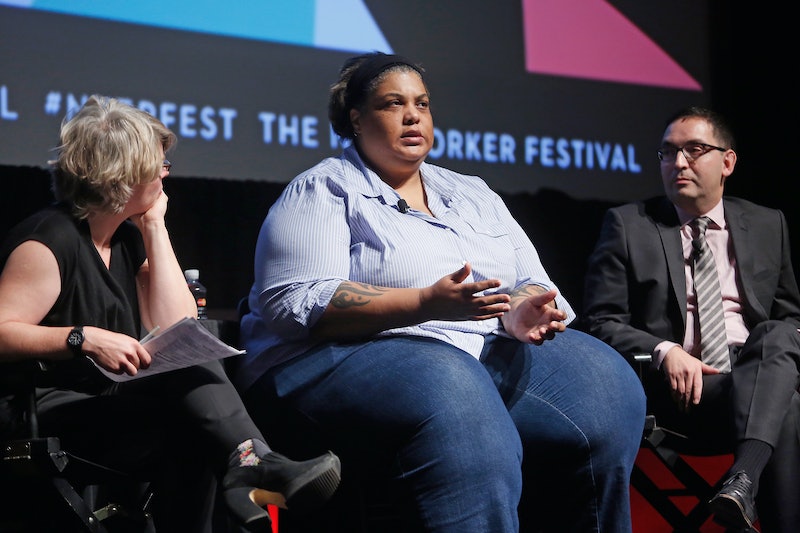 There's no doubt about it, Roxane Gay is a powerhouse, a goddess, a bona fide badass. If you loved Bad Feminist, or An Untamed State, or any of Gay's online endeavors, you, like me, hang on to her every word. And now, I've staked out a permanent spot on the edge of my seat for her new book, Hunger: A Memoir of (My) Body, coming out this June.

That's right, Gay is turning her mighty pen to body image, a subject we've all had to confront. (That sound you hear is all of your hopes and dreams coming true.)

This isn't going to be another one of those "how I lost weight" guides, but rather, an exploration of Gay's own journey to understand herself. In a recent interview with Entertainment Weekly, Gay gave some insight into what we can expect from this new book, saying, "“I started this book fat, and I’m finishing it fat, This isn’t a book about successful weight loss. It’s about trying to change my relationship with food.”

Bad Feminist made a splash (OK, more like a tsunami) when it came out in 2014, and for good reason. Gay has consistently demonstrated a unique knack for pulling truth and insight from any moment, often making brilliant connections between pop culture and our society's deepest issues. I, for one, cannot wait to see what she has to say in Hunger.

So, since June can't come enough, here are some books that will remind you of Bad Feminist and get you excited for what's coming.

1. Men Explain Things to Me by Rebecca Solnit

An instant classic, this book goes hand-in-hand with Bad Feminist, expertly calling out the serious problems with our society treats women. The titular essay is particularly well-known; Solnit dives into the gendered habit of not listening to women, even when they're saying serious things, like, "He's trying to kill me." A must-read for any feminist, and really, any human.

Now that issues of weight and self-image are on the table, try this great YA novel on for size. Angie has a lot going on: her sister is missing, her mother is inattentive, and she is horribly bullied by her schoolmates. After a failed suicide attempt, Angie returns to school, where she meets a transfer student that sees Angie's worth. The story of a girl trying to understand her body and how it affects her place in the world.

3. The Misadventures of Awkward Black Girl by Issa Rae

If there's one thing I love about Roxane Gay, it's her ability to be proud of herself and who she is. This excellent essay collection exudes that same confidence, as Issa Rae dives into what it means to be "awkward" and black. Funny, insightful, and unapologetic in the best of ways.

4. You Don't Have to Like Me: Essays on Growing Up, Speaking Out, and Finding Feminism by Alida Nugent

In this superb collection of essays, Alida Nugent adds her unique and captivating voice to the feminist canon. Mixing personal experience with deep thought, Nugent tackles issues from birth control to being multiracial, examining society with a critical, albeit hopeful, eye. And according to Nugent, feminism is definitely something to be proud of. (A sentiment, I'm sure Gay would agree with.)

5. The Empathy Exams by Leslie Jamison

This essay collection from Leslie Jamison is a phenomenal look into society. This book draws on a variety of personal experiences, such as her job as a medical actor (in which she was paid to act out symptoms for medical students to diagnose). Asking questions about our basic understanding of others, Jamison gets to the heart of what makes us human. In her 5-star review on Goodreads, Gay herself says, "I particularly appreciated how each of the essays took up empathy in different ways and articulated the challenges of being human while recognizing the humanity in those around us."

6. BITCHfest: Ten Years of Cultural Criticism from the Pages of Bitch Magazine edited by Lisa Jarvis

Bitch was launched in the mid-90s as a Xerox-and-staple magazine, and since has published thousands of knock-out pieces on feminism, pop culture, society and everything in-between. Filled with sharp, thoughtful essays, this collection delivers a cool look at how the feminist lens has progressed over time.

7. In Praise of Messy Lives: Essays by Kate Roiphe

A collection of sharp essays that combine pop culture and feminism to examine our daily lives....sound familiar? Though this book came out in 2012, before Bad Feminist, it will definitely hit you in that same sweet spot. Roiphe explores everything, from internet comments to Mad Men to David Foster Wallace.

8. The Beauty Myth by Naomi Wolf

This feminist classic dives into a subject very similar to that of Hunger: how the idea of beauty is used against women. According to Wolf, our society's obsession with physical perfection is restricting even the modern woman, as she's trapped into trying to be flawlessly beautiful. An interesting point-of-view, one that will get your wheels turning for Hunger.

Gay says Hunger seeks to tell just her personal experience, but this well-known feminist text does the opposite by analyzing our society's body ideals in relation to culture. I'd be curious to hear what Gay has to say in comparison to this book — or even if she has some thoughts about it.