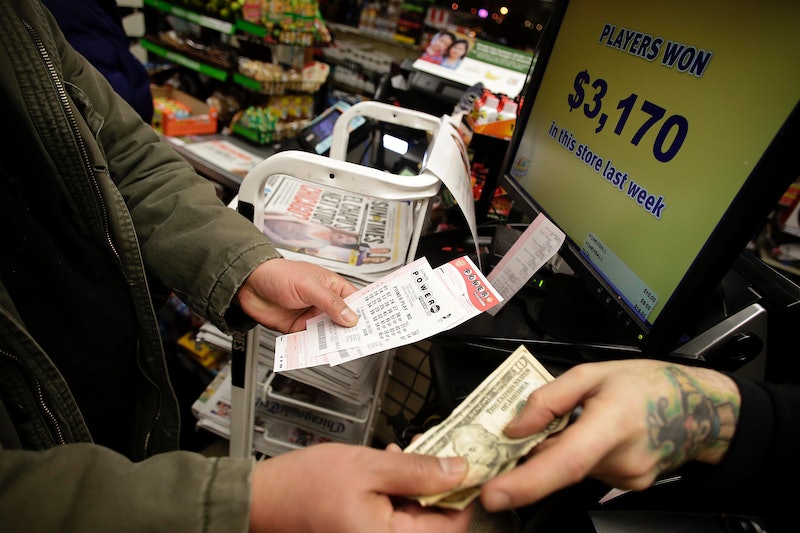 Powerball has come into major style since the jackpot rose to an unprecedented $1.5 billion, and it will possibly grow even more by the time the numbers are announced. And to be fair, who doesn't want to be a billionaire? That being said, statistics about the Powerball put one's chances of winning at only one in over 292 million, but risks pay off ... sometimes. Regardless, the lottery is generating all the hype. The billion-dollar ticket will mark the largest jackpot in lottery history, surpassing the previous record of $590.5 million, which was won by a Florida contestant.

The Powerball jackpot began rising after no one guessed the winning number combination that was drawn on Saturday. However, that's not to say there weren't winners across the nation. According to ABC News, $159,080,965 was given away in winnings just over the span of the past weekend. Like me, you might not be a gambler, but this still makes it tempting to play. Among all else, remember that it's just like walking up to a blackjack table and throwing down cash that you're prepared to lose ... except your chances of winning are infinitely worse. But before you go out a whim and buy a few tickets from your local gas station, keep in mind these fun facts about the lottery.

1) You Have A Better Chance Of Dying In Horrible Ways

Money Mini Blog cheerfully lists a handful of ways you can die that are more likely than winning the lottery. One of them includes being killed by a vending machine (one in 112 million odds). Point made.

In other words, you have the same chance of winning over a billion dollars today as you did of winning millions a month ago.

Assuming you win, the government will end up taking about a quarter of your winnings.

Keep in mind, the white balls go up to 69 and the red Powerballs only reach 26. Days in the month only go up to 31, people. Don't limit your chances by guessing the numbers of a particular date.

I always imagined the lottery as one big singular lump sum of money. But in reality, there are multiple multi-million dollar piles, including Powerball, Mega Millions, and various state lotteries. And anyone can play the American lottery online, regardless of their citizenship.

That's right. Money accumulated through the purchase of lottery tickets have helped to fund Oscar-winning films such as The King's Speech. The UK National Lottery's website has an entire list of "good causes" to which it has contributed in Great Britain.

7) There Is Believed To Be A "Curse Of The Lottery"

Beware. According to the New York Daily News, 70 percent of lottery winners spend all their winnings and proceed to lose the rest of their money within seven years. Sometimes, people don't make the most proactive decision. Take, for example, the guy who blurted out to a Las Vegas news reporter that he'd spend his winnings on "hookers and cocaine."

More like this
These Swimsuits & Cover-Ups Look So Good On, You'll Wear Them Constantly
By Sara Brown-Rigoli
What Is the Net Worth Of Each 'Stranger Things' Season 4 Cast Member?
By Hugh McIntyre
Howard Stern's Net Worth: Is He The Richest Man In Radio?
By Hugh McIntyre
What Is Ariana Grande's Net Worth? When It Comes To Money, She Has No “Problem”
By Hugh McIntyre
Get Even More From Bustle — Sign Up For The Newsletter