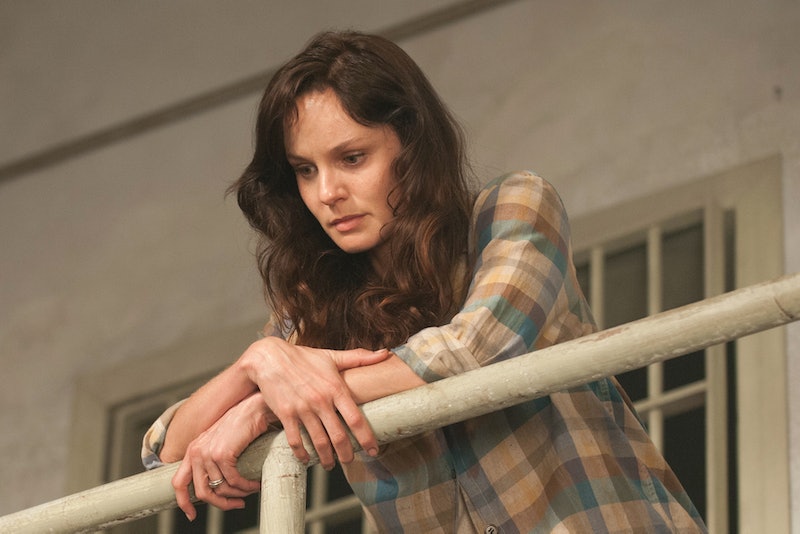 If you're a die-hard fan of AMC's The Walking Dead, then you probably have strong feelings regarding Lori Grimes. There's no doubt that many fans did not care for Rick's wife on the series. Even star Steven Yeun (Glenn) admitted he hated Lori when he read the comic books during a Comic-Con panel. She seemed to be one TV character you either loved, hated, or had a love/hate relationship with. The actor who brought her to life definitely has strong feelings, but they are extremely positive, and for a great reason. Sarah Wayne Callies loved Lori on The Walking Dead and has noticed an upsetting trend in the backlash against the character.

"I understand that and it's certainly out there in a lot of ways," she tells Bustle about Lori not being deemed a fan-favorite character. Fortunately, Callies also says that hate was not universal. "It's fascinating, I've gotten thousands of letters from around the world from people thanking me for Lori, for her strength and her unwillingness to be sort of cute and unthreatening just because that's more appealing. I stand by Lori. I think she's an amazing character. I think she's beautifully written."

So, why did so many have a distaste for Lori? Well, there are a slew of reasons, but the Colony actor thinks there are some people who had a problem with how she acted as a woman. Overall, she believes many judged Lori for not taking on the so-called "traditional" role of a woman, wife, and mother.

I also think of some of what was going on with Lori was tremendous gender double standards. People judged her parenting decisions in ways that they never judged her husband's parenting decisions, because the expectation was she should care for the child in the home. I learned a lot, actually, about our cultural function from peoples' reactions to Lori.

Still, Callies never expected such a negative reaction towards Lori. But that never bothered the former Prison Break star, as she explains that she doesn't ever take on a role just to be liked by the public. Acting is her career and if that means portraying a hated character, that's fine with her.

"I didn't see it coming with Lori," she admits about the negativity her character faced. "I knew she was complicated ... I never want to play a character in order to be liked. That's vanity, that's not art."

So if you hated Lori, know that the woman who played her definitely isn't losing sleep over it. When all is said and done, not only did Callies do her job on The Walking Dead extremely well, but she was also able to showcase how a woman can be tough, loving, threatening, and flawed, all at once.