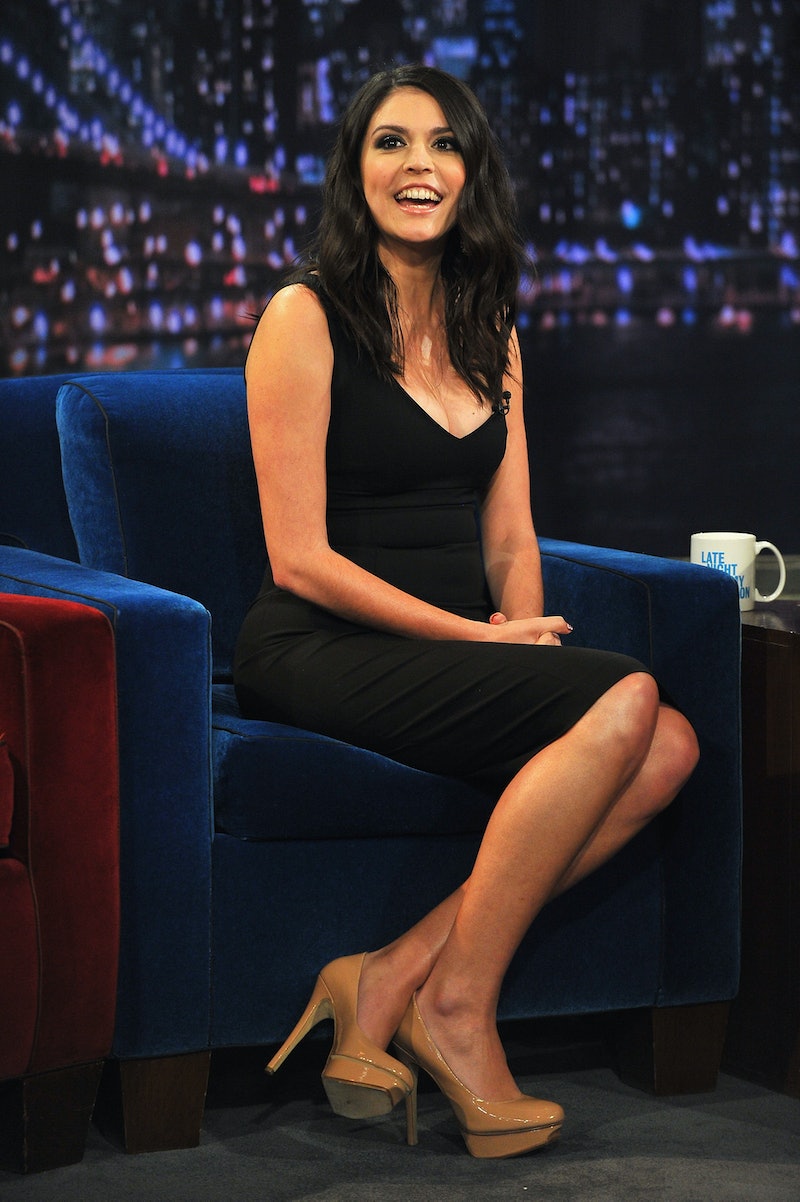 Thursday, SNL announced that it would be adding head writer Colin Jost to the Weekend Update anchor team as soon as Seth Meyers leaves to host Late Night. While it's lovely to think that another comedian is about to enter our lives, Jost's appointment isn't entirely necessary.

It just so happens that Meyers gained a new co-host earlier this year in recently promoted cast member Cecily Strong, who was lucky as to get a Tina Fey endorsement on her first night at the hallowed Update desk. The switch from Meyers to Strong seemed all but set: SNL was weening us off of Meyers by adding the next Update anchor into the mix early, so that when February came along, we'd be ready to let go and move on with Strong. But now, we're not only losing the face we've trusted to make sarcastic quips about the week's biggest stories and to field questions from drunk uncle for the past seven years, we're gaining an unfamiliar one, and a face that frankly, isn't even totally necessary.

Rather than allowing Strong to become the first solo woman anchor on Weekend Update since Jane Curtin took over for Chevy Chase in 1976, and thus put a little faith in the series largely young cast, the series thought it would make more sense to give her a safety blanket in the form of SNL's head writer, Jost. But here's a thought: Maybe she doesn't need one.

Some folks might disagree that Strong could host the weekly news commentary sketch on her own, but fear not. I came prepared:

But Cecily Never Gets As Many Laughs as Seth

It may appear that way, especially because when she first started out on the desk she was a little unsure in her delivery, but now we're halfway through the season. The audience has grown accustomed to her delivery and style of comedy, and she gets just as hearty of a response as Seth. Besides, Strong flew solo during CES this January and she was amazing.

But Weekend Update is Supposed to Be Hosted By Two People

Bullshit. If we're going to get really technical, not only has Meyers hosted the newsy sketch alone since Amy Poehler left SNL in 2008, Weekend Update was also conceived as a one-anchor sketch back when it was hosted by Chevy Chase. There was also a period in the '80s in which SNL's news sketch wasn't called Weekend Update, but rather SNL Newsbreak and later The Saturday Night Live News.

The segment eventually returned to the name Weekend Update, but clearly, the format isn't impervious to adaptation.

But Weekend Update is Always Hosted By the Head Writer

False. Weekend Update has included the head writer as one of two anchors since 2000, when head writer Tina Fey took over the desk with her co-host Jimmy Fallon. Since then, every Weekend Update anchor desk has included the head SNL writer — Fey or Meyers — with the exception of 2006, when Horatio Sanz joined Poehler while Fey was on maternity leave.

The bottom line is that the "head writer tradition" is a relatively recent rule that doesn't necessarily need to be followed.

Yes, of course we'll miss Seth. That doesn't mean we'll need a skinny white guy to sit in the desk he once occupied. We missed Jimmy Fallon when he left the anchor desk, and guess who they replaced him with? The adorable, ruthlessly funny heroine of comedy (and let's be honest, of life in general) Amy Poehler, who was not a tall, gawky dude, but a tiny, blonde pixie woman. And I don't know if you've seen any recent Golden Globes telecasts, but that revolutionary pairing seemed to work out just fine.

But Colin Jost is Funny

He'd better be — he's the head writer of the biggest sketch comedy show in America. That doesn't mean he needs to share the duties that Strong is perfectly capable of handling on her own.

So, if you disagree, more power to you: You're the one getting your wish when Jost puts on a tie during the first February episode of SNL. So maybe don't gloat about it.

More like this
Colin Firth Revealed His Favourite Mr. Darcy (& No, It's Not Himself)
By Sophie McEvoy
David Schwimmer Doesn't Remember This Classic 'Friends' Episode
By Sam Ramsden
'Bridgerton' Star Nicola Coughlan Confirms Season 3 Will Focus On Colin & Penelope
By Grace Wehniainen and Alyssa Lapid
Grey's Anatomy Fans Refuse To Accept Kaimelia's Shocking Relationship Update
By Brad Witter
Get Even More From Bustle — Sign Up For The Newsletter