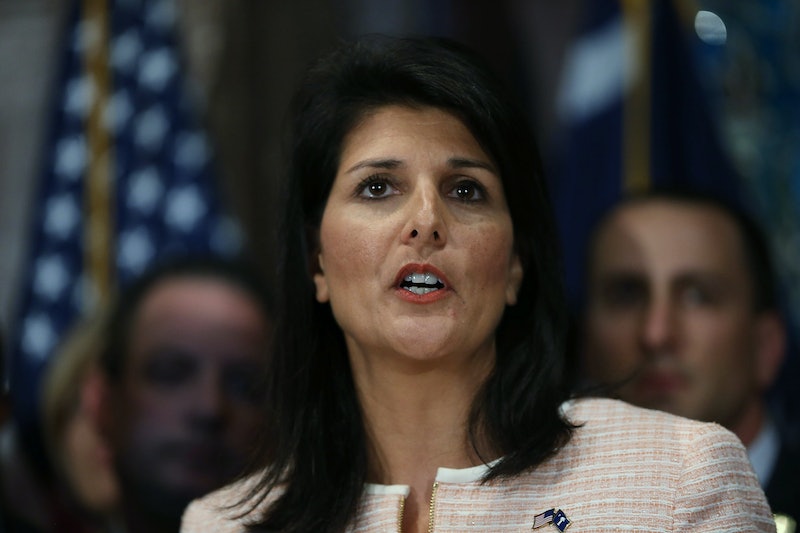 Following President Obama's final State of the Union Tuesday night, South Carolina Gov. Nikki Haley delivered the GOP's response to his address. As she's done in the past, Haley used her own background to talk about America's immigration issues, explaining how she thinks there are some serious problems with the current system. In her response, she mentioned that she's the child of immigrants, but who are Nikki Haley's parents?

In the rebuttal to the State of the Union, Haley said: "The foundation that has made America that last, best hope on earth hasn't gone anywhere. It still exists. It is up to us to return to it. For me, that starts right where it always has: I am the proud daughter of Indian immigrants who reminded my brothers, my sister and me every day how blessed we were to live in this country." Born Nimrata Nikki Randhawa, the governor's parents — Ajit Singh Randhawa and Raj Kaur Randhawa — emigrated to South Carolina from Punjab, India.

They were the first Indian immigrants in the small town of Bamberg, South Carolina, about an hour south of Columbia. The New York Times reported that when Haley and her sister, Simran, entered the Little Miss Bamberg pageant, they were disqualified because the judges typically crowned one white and one black queen, and they didn't know what to do with the Indian girls.

Haley's parents are Sikh, a religion distinctly different from Islam. Her father, Ajit, wears a turban, and although male Sikhs are not supposed to cut their hair, her brothers did after kids at school continuously teased them, according to The New York Times. Haley converted to Christianity, and her website says she and her husband attend Mt. Horeb United Methodist Church in Lexington with their two children.

Ajit was a biology professor at Voorhees College and her mother, Raj, started her own clothing business — Exotica International. Beginning as a gift shop, Exotica International grew into a multimillion-dollar company, selling gowns, suits and jewelry. In a 2007 interview for SikhChic.com, Haley said of her parents:

They made the decision to leave a great life in India and start over here, because they saw the opportunities that would be available to their children. My mom loved the American tradition of passing things down to your children. Having left India, they wanted to do the same thing for us and so that's how Exotica was born. It was established in 1976 out of a room in my parents' home, but today, it is a 10,000 square foot store in West Columbia.

In her State of the Union response, Haley criticized having America's borders completely open, but also condemned the idea of banning all Muslims from entering the country:

We must fix our broken immigration system. That means stopping illegal immigration. And it means welcoming properly vetted legal immigrants, regardless of their race or religion. Just like we have for centuries.

Her background gives her a better understanding of immigration than what many GOP politicians, whose parents and grandparents were all born in the U.S., have, and she used that fact to her advantage.