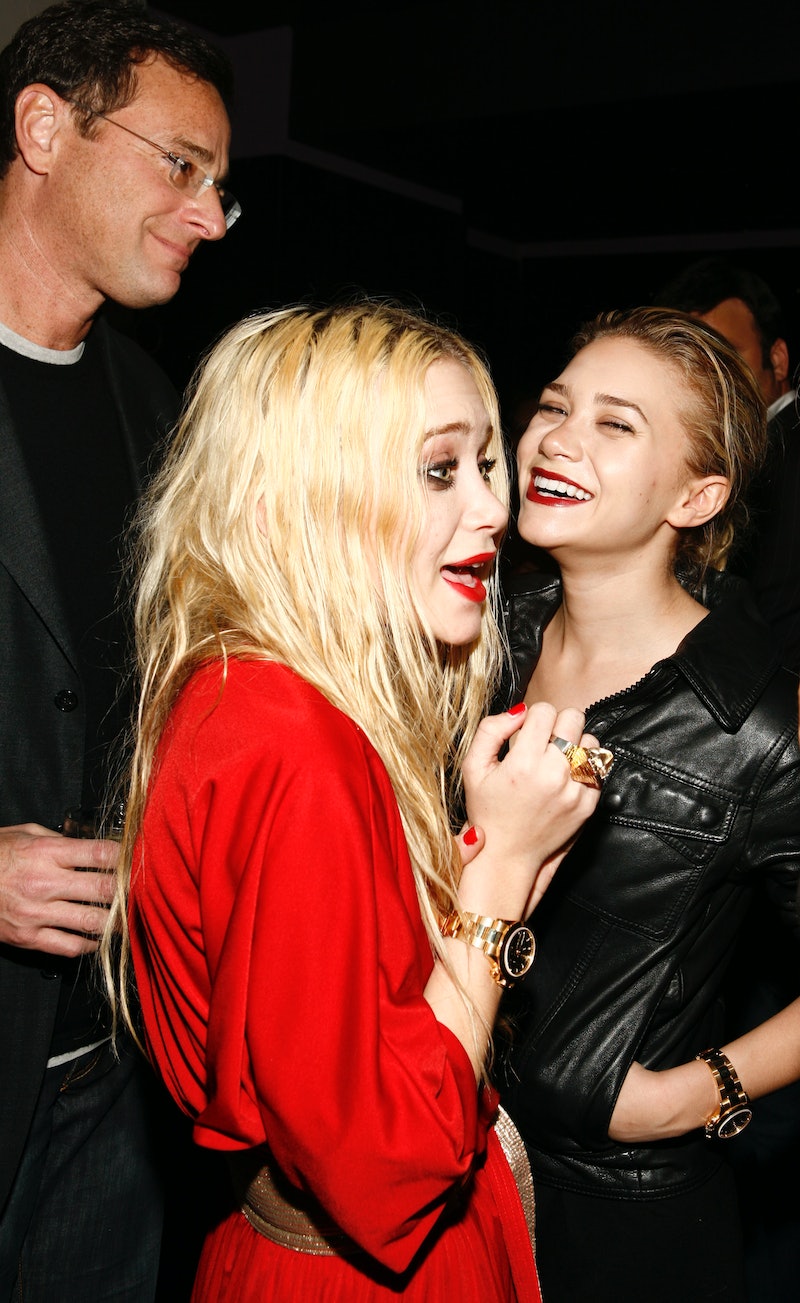 Meet the Olsens: childhood idols, sartorial experts, and masters of the red carpet smolder. But pause — have you ever seen Mary-Kate and Ashley flash their pearly whites? The twins may have grown up milking it for the camera, but their adult years lack the golden ingredient that the media clamors from celebrities: a toothy smile. After all, this is Hollywood, land of the million dollar smirk.

From front row at the runways to awards shows, the Olsens always show up dressed to the nines. And even as an forever quotable tot on Full House, Mary-Kate and Ashley knew how to win over the camera — and their audience. No matter the photo op, the business-savvy duo manages to look impossibly chic, all in part to their secret weapon. It's not in the angles or lighting, but rather, a certain fruit. Allegedly, every time the Olsens strike a pose, they whisper the word "prune," according to BuzzFeed. Supposedly, this word creates the ultimate relaxed pout. Looks like the Olsens' hack for acing your next selfie all lies in the lip game!

No wonder the public is never privy to seeing Mary-Kate and Ashley's teeth — that is, until now. Sometimes the twins let their colors fly free, and the results are glorious.

Note to Mary-Kate: don't be afraid to show off that smile.

I don't know about you, but it's refreshing to see Mary-Kate and Ashley trade their serious smirks for something light-hearted. I demand more moments like these.

3. Farce Of The Penguins Premiere

Seems like Danny Tanner — ahem, Bob Saget, has some LOL-worthy power. Look at those genuine grins!

This is a classic case of one sister embracing Operation: Prune while the other quite didn't get the memo.

What better time to show a glimpse of those pearls than accepting an award for Womenswear Designer of the Year?

Even front row at Chanel, Mary-Kate can't help but offer up a vibrant smile for her partner-in-crime.

Petition to crown the Olsens as the two honorary members of Charlie's Angels.

Life before the "prune" method was so simple and carefree.

Stylish threads are best paired with a sunny smile.

Gosh, TLR and fetus MK + A is such a throwback.

Every girl must remember the first time they watched New York Minute and positively fell in love with the Big Apple — it's a rite of passage after all. For me, it was at a third grade sleepover, and not much has changed since.

The girls circa their So Little Time phase — clearly adorable as ever.

Raise your hand if you remember desperately begging your parents for the must-have Pocket Planner. My GameBoy was everything to me back then.

Alternate title: the very movie that inspired me to play soccer.

Can we talk about those early 2000s getups, though?

Back in black has never looked better.

Looks like the Olsens' flair for business chic began all the way in 2002.

Stop — my heart is melting.

19. On The Late Show with David Letterman

The twins aren't shy to show off their athletic spirit.

21. On The Hollywood Walk of Fame

It's all smiles (well, almost) as the Olsens get their much-deserved stars on the Hollywood Walk of Fame.

Putting on their best stage act.

23. Anna and the King Premiere

1999-era Mary-Kate and Ashley is giving me intense nostalgia.

Fact: only the Olsens can pose with a neon yellow bear and still look like rockstars.

Because no Olsen post is complete without a dose of Michelle Tanner — or more so, double the Michelle.