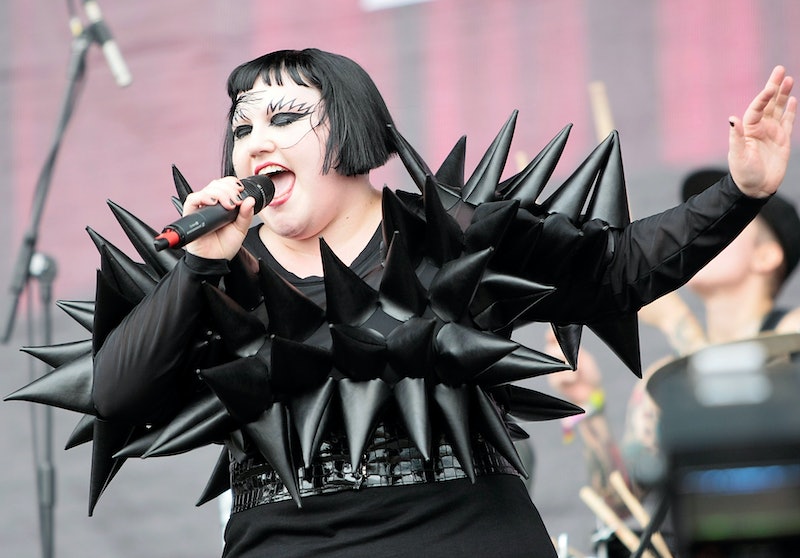 Upon hearing the news that Beth Ditto was making something of a comeback in 2016, with not just her own clothing line but also with a solo record, I suddenly felt a hell of a lot less scared for what the future holds. This plus size icon has been challenging everything that a pop star can be for years, not to mention rocking the fashion and acting worlds as muse to many huge houses, such as Jean Paul Gaultier and Marc Jacobs. She is equal parts unapologetic, fabulous, and powerful, and has been since her band The Gossip's formation in 1999.

As a queer, fat woman in 2016, I now appreciate everything that Beth Ditto has done so much more than I did when I was just a curvy, coming-to-terms-with-bisexuality teen. Looking back at her photo shoots, music videos, runway walks, and live performances gives me so much life. The ferocity and brilliance of being a fat woman is epitomized in Beth Ditto, and I'll always aspire to be just that little bit more like her.

These pictures of her throughout the years particularly encapsulate why we have so much to look forward to with Ditto's return to the limelight in 2016. Because the world can always use another plus size, body positive babe to represent the rest of us fabulous fatties in the mainstream.

Because seriously, who else can pull off a bowl cut, let alone a striking red one? Seeing Ditto rock such gorgeous, risky, and high fashion haircuts definitely inspired my forays into Manic Panic.

I love that this babe will wear anything she wants, even shapes that are notoriously "unflattering" on larger women. I never would have dared to wear a shape like this, but seeing Ditto work it makes me want to try.

I'm the kind of gal who loves a conceptual look, especially when it's pulled off with as much fun and dedication as this.

Whenever I picture Beth Ditto, I automatically think of her with short hair, and usually a bob. But this hairstyle looks so, so beautiful on her. Total Grecian goddess vibes.

Ditto's relationship with her now-wife Kristin Ogata is beautiful, not just for how much they seemingly care about one another, but for the unapologetic representation of a plus size queer woman aware of her sexual agency.

Although she may not be the first to spring to mind for some regarding this topic, I often think Ditto uses her sexuality on stage and in real life to prove that plus size babes deserve to be just as sexually liberated as our thin counterparts.

Like I said, Ditto's been on many a runway and has had many a designer clamoring to work with her. Her stake in high fashion isn't just a statement, but a genuine interest.

As a Beth Ditto fan, you should know what I mean as soon as the words "Beth Ditto" and "playsuit" are paired in the same sentence. This look has stuck with me for years, maybe because it's so similar to my own aesthetic or maybe just because she looks so damn good in it.

This cabaret look is everything, especially when combined with some beautiful Edie Sedgwick-inspired makeup.

Ditto walking for Jean Paul Gaultier in 2010 was just stunning, proving that every type of body deserves to strut down a catwalk.

Never afraid of a bold print despite the so-called rules of plus size fashion, Ditto has been rocking every shape, hue, color, and pattern for over a decade.

Maybe 12-year-old goth me couldn't have pulled off solid black eye makeup, but I'm of the strong opinion that Beth Ditto can wear literally anything.

I think the reason I'm so excited for Ditto's return to the public eye is that she'll get to inspire a whole new generation of teens the way that she did for me. This genius' musical and artistic talents are undeniable, but her refusal to conform is what makes her such an icon.