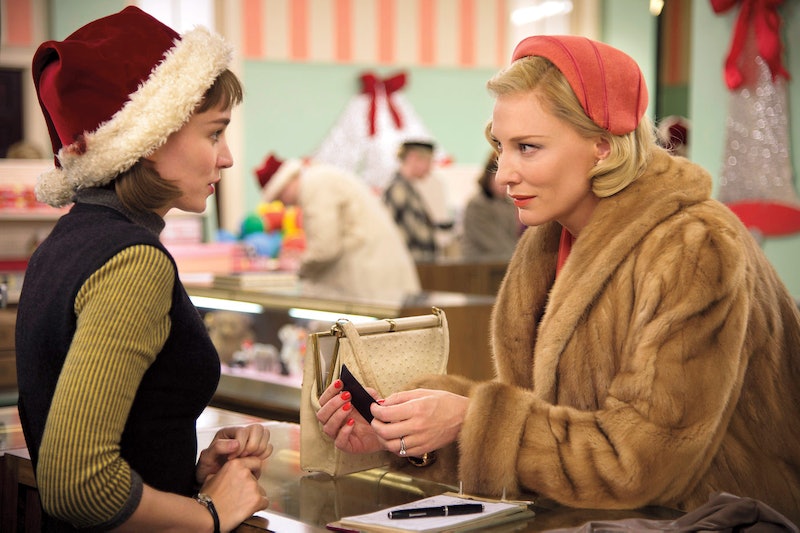 This year, when the 2016 Oscar nominees were announced, women screenwriters among the 2016 Oscar nominations finally gave us a reason to celebrate. I mean, it's not easy being a female screenwriter, especially around Oscar time. Historically, women are left off of the final ballot for Best Original and Adapted Screenplay in lieu of their more well-known male counterparts. This could point to the fact that, on a yearly basis, there are many more male writers to choose from than female ones. In 2013, Indiewire reported that "88 percent of all films that year were written by men." Last year, all fifteen writers nominated for Original and Adapted Screenplay categories were male, relegating female writers like Gillian Flynn — who adapted her own novel Gone Girl — to the list of snubs. However, out of the 20 writers nominated between the two writing categories in 2016, four were female.

That may seem like a small number, but, compared to last year's zero, this is a big step up — especially when you starting breaking down the list of nominees. Two were the sole writers of their adapted screenplays: Phyllis Nagy for Carol, adapted from Patricia Highsmith's Price of Salt, and Emma Donoghue for Room, her very own novel. The other two female screenwriters co-wrote their original screenplays: Inside Out's Megan LeFauve and Straight Outta Compton's Andrea Berloff.

All of these women are first-time nominees, but the work that earned them their nominations differs widely. Carol is a lesbian romantic drama that takes place in the 1950s, while Room tells the at first tragic, but then triumphant, story of a mother trying to survive in a tiny shed alongside her young son. Straight Outta Compton is the story of the hip-hop group N.W.A., while Inside Out takes us inside the emotional center of a teenage girl. But, as different as they are, they all have one major thing in common: they all landed within the top 100 best-reviewed films of 2015.

Four also begins to sound like a revelation when you start looking at the history of this award in relation to women. According to Vocativ, only two female screenwriters have won an Oscar in the last decade: "Out of the160 screenwriters credited for the 100 films nominated between 2005 and 2014, only 18 were women. Those women contributed to 16 films — or 16 percent of nominated screenplays — two of which won Oscars (Juno and Brokeback Mountain)." Which means that, even when women manage to get nominated, they have a hard time actually winning. Just ask Ruth Gordon and Nora Ephron, two of the most celebrated female screenwriters, who were both nominated three times — the most by any woman — and both never won. (The most nominated male screenwriter, by the way, is Woody Allen, with 16 nominations and three wins.)

Sadly, a lot of these firsts are also the onlys. Suzanne de Passe is the only non-white woman to ever be nominated for a screenwriting Oscar. Ruth Prawer Jhabvala is the only woman to win two Oscars for screenwriting Howard’s End and A Room with a View. This lack of notable history is the reason that it's a big deal to see four women nominated for this year's screenwriting prizes. It's not often you see that many in one single year.

The last time two women were nominated for Best Original Screenplay was in 2011. Those two women were Kristen Wiig and Annie Mumolo, who were both nominated for Bridesmaids. You have to go back to 2007 for a year when female writers were actually competing against one other: Lars and The Real Girls' Nancy Oliver, The Savages' Tamara Jenkins, and Juno's Diablo Cody (who won the award). That's also the last time a woman actually won a screenwriting award, and also the last time they held the majority in the category. That certainly makes it the odds of a woman winning greater, doesn't it?

It's clear that a win for a female screenwriter this year doesn't solve the problem entirely. It's just a Band-Aid. But wouldn't it be nice to see a woman take home the statue for Best Original and Best Adapted Screenplay for the very first time? It would certainly be a historically good start.

More like this
Amanda Gorman Shared A Powerful Message On Meghan Markle’s Penultimate Podcast
By Darshita Goyal
Yes, That's Lindsay Lohan's Sister Singing In The 'Falling For Christmas' Movie
By Radhika Menon
Keke Palmer Paid Tribute To "Other Half" Darius Daulton After Announcing Pregnancy
By Jake Viswanath
Keke Palmer Finally Showed Angela Bassett Her Famous Impression Of Her
By Stephanie Topacio Long
Get Even More From Bustle — Sign Up For The Newsletter