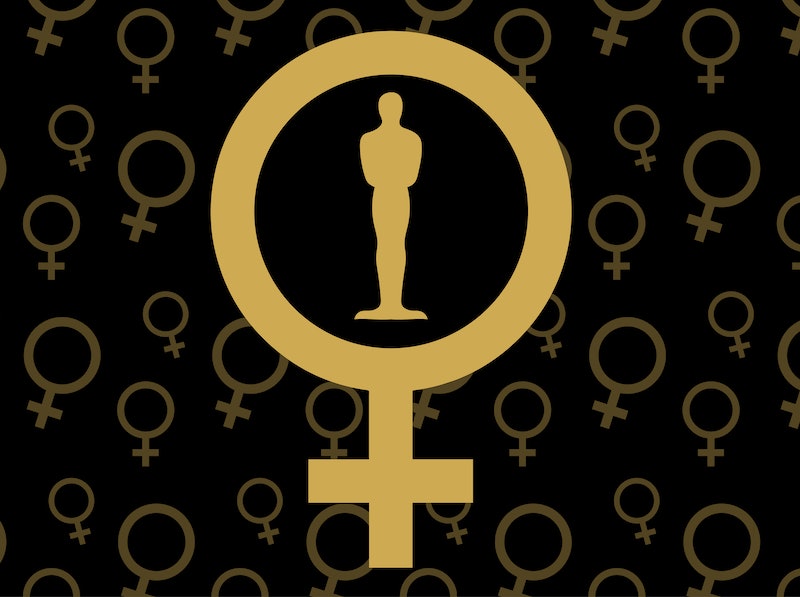 Last year's Oscars weren't great for diversity. Actually, let's strike that, because that wording is just a bit too kind. Last year's nominations were a complete backslide on the issue. The #OscarsSoWhite hashtag started trending shortly after the nominees were announced and not one single person of color was nominated in any of the acting categories. This was a first since 1998, making it the whitest Oscars in recent memory. Though, one look at the 2016 Oscar nominees, and you see this problem still hasn't been corrected, what with the Straight Outta Compton and Creed snubs. Selma was one of the best-reviewed films of last year, but the woman at its helm, Ava DuVernay, didn't make the cut for Best Director. It was a sign of how the Oscars often fail to recognize women in film as well.

In 2016, however, there is hope. This year women saw more nominations across the board in comparison to 2015, even making their way into the Best Picture race. Last year, the Academy seemed to completely forget movies that starred female characters, and the women who made them. These snubs are what led The Los Angeles Daily News to write that the 2015 Oscar nominations could be summed up in two words: "racist and sexist." Indiewire called it a "dark day for women in Hollywood," while The Washington Post pointed out that "seven of the 15 Academy Award categories [examined by The Hollywood Reporter] have no female nominees at all — visual effects, sound mixing, original screenplay, adapted screenplay, original score, directing and cinematography." Not to mention how not one single movie nominated for Best Picture featured a female-driven story.

Some want to think that the Academy's aversion to female films is something of the past, chalking it up to historical sexism. But as Newsweek pointed out in 2014, the modern era (1970 to now) of the Academy Awards has shown an even stronger skew away from female-dominated films. Last year, out of the nine Best Picture nominees — Birdman, Boyhood, Selma, American Sniper, The Grand Budapest Hotel, The Imitation Game, The Theory of Everything, and Whiplash — not one was a female-focused story.

As Time points out, seven of the eight Best Picture nominees were about a white man dealing with internal conflict. Out of the five Best Actress nominees, only one was from a film that was nominated for Best Picture: Felicity Jones in The Theory of Everything. And if we're splitting hairs here, Jones was playing the supportive wife of the real protagonist of the film, and was thus in a supporting role, no matter how much the filmmakers tried to claim that the movie is about their relationship.

But three of the eight films nominated this year for Best Picture — Brooklyn, Mad Max: Fury Road, and Room — are about women. Even better, these films show diverse female characters who are well-rounded and different from one another. And their inclusion isn't diversity for diversity's sake; all three of these movies were some of the best-reviewed of the year.

Brooklyn is a timeless story of immigration focusing on an Irish girl who is stuck between her old home and her new one. Mad Max: Fury Road was the most feminist film of the year — and the second-most-nominated behind The Revenant, with 10 nods — despite being named after a male character. Room is a story of one woman's struggle to survive, or at least to save her young son.

Historically, women's movies have a hard time getting recognized by the Academy, outside of the female acting categories. Even as Best Picture has been expanded to include a possible 10 nominees (in the hope of honoring more populist fare), female-driven movies that were box office hits, like Bridesmaids, haven't fared well. The Bridesmaids year, 2012, was also when Kathryn Bigelow was snubbed for a Best Director nomination for Zero Dark Thirty. It's part of the reason Salon decided to take a closer look at Oscar's woman problem, noting that there were as many films nominated for Best Picture that year about women (The Help) as about horses (War Horse).

The second-tier status of women's films has had a clear effect on the Best Actress category, in which the women nominated are one of a few (if not the only) nominees from their respective (often smaller) films. In 2014, Newsweek set out to show how little respect women's films get from the Academy by looking at the number of Best Actor and Best Actress nominees who appeared in Best Picture contenders.

"Only 40 percent of women's acting nominations come from Best Picture-nominated films, as opposed to 52 percent of men's acting nominations," writer Amelia Showalter explained. "Nearly twice as many actors (14 percent) as actresses (8 percent) were nominated for films that eventually won best picture. In other words, men more often get recognized for their performances in films of the highest perceived quality."

This is something we definitely saw in 2015, when four of the nominees for Best Actress were in movies that weren't nominated for the top prize: Marion Cotillard in the French drama Two Days, One Night, Rosamund Pike in Gone Girl, Reese Witherspoon in Wild, and the year's winner, Julianne Moore in Still Alice. Compare this to the Best Actor category, wherein only one nominee — Steve Carell in Foxcatcher — wasn't in a movie nominated for Best Picture.

This year, that ratio has unfortunately only been tweaked slightly, with two out of the five women nominated for Best Actress appearing in Best-Picture-nominated films: Room's Brie Larson and Brooklyn's Saoirse Ronan. But that ratio is also the same for this year's Best Actor nominees — a reflection of how many of this year's Best Picture nominees are ensemble pieces without clear stars.

However, having more women's films in the Best Picture category may have helped more women behind the scenes get nominated in 2016. This year's Best Director nominees are still all male, but on the producing side, we see six women recognized for their work on eight of the Best Picture nominees. Two women landed in the Film Editing category — up from one last year — and one women was nominated for Visual Effects after last year's shut-out.

In 2015, Best Original Screenplay and Best Adapted Screenplay didn't see a single woman get nominated. This year, Emma Donoghue was nominated for Best Adapted Screenplay for the script she wrote based on her own book, Room. Phyllis Nagy's name is on that same ballot for adapting Carol from Patricia Highsmith's novel The Price of Salt. For Best Original Screenplay, two women were nominated for co-scripting: Meg LeFauve for Inside Out and Andrea Berloff for Straight Outta Compton. It's a small number, but still an unbelievable increase from last year. There's still work to be done — cinematography, directing, sound mixing, original score were still female-less this year — but at least things, for the most part, have moved in a better direction.

It's clear that these three female-driven movies have their work cut out for them in the race for Best Picture. But for now, we should celebrate the fact that they were finally included in the race at all. Think of this as a small victory that could lead to big rewards in the future. Hopefully, the very near one.